The Song Of Sarnano

Strangers come for the day and do not hear that Sarnano is special in ways that many towns do not share. The resident was going to try to explain the sound and silence to his young friend. 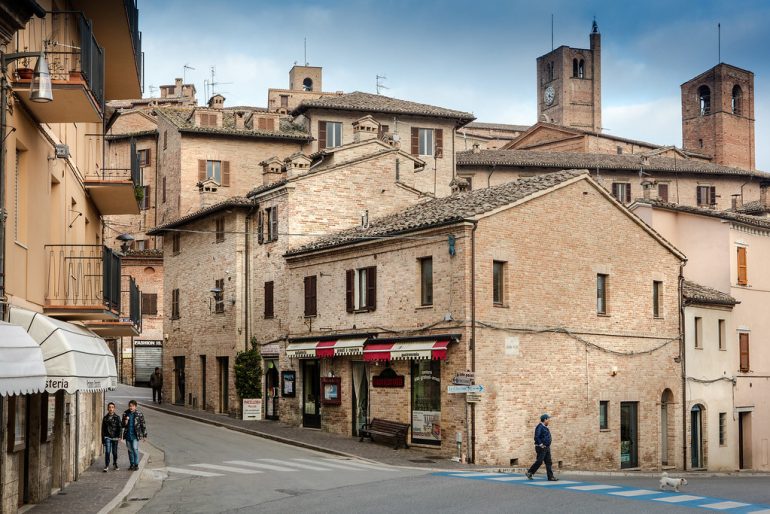 The two men sat on the terrace of the recently opened cafe, La Grotta Degli Schiavi, the Cave of the Slaves, in the centro storico. They were finishing pranzo, which was heavier than expected. It slowed down their thinking and movements. The wine helped.

They were acquaintances of some years, though one was considerably older. His face showed the attendant gullies, cracks and ridges, un-repaired by the botox that an American friend suggested in humor. There were spots on his hands. When he thought, and before he spoke, his eyes wandered over the buildings, the cobblestones in the square, the church tower brightened by sun under scattered soft cumulus clouds. Flocks of swallows raced above the walls, swooping for insects.

The man was retired from work that expected skills of observation and patience. Those qualities had saved his life on occasion. His body and mind had suffered in service, and he lived in the town below the mountains and the national park for peace and avoidance. He knew that everything bought is paid for.

His companion was unmarked, without years or experience. It was his first trip to Sarnano and to Le Marche. Coming from Canada, he landed at the airport in Rome and had formed an immediate distaste for the crowds and confusion. He thought it was similar to Toronto, warmer in temperature, but more than he could handle comfortably. He had been urged to see Tuscany and the glory of Veneto.

On arrival, 5 hours northeast of Rome, delivered by taxi from the bus terminus 40 kilometers away, the two men embraced and went to the tourist office attended by the woman with English. They picked up brochures and went to the apartment off Via XX Settembre. The young man settled in, changed his clothes, and made ready for lunch. He was a musician, skilled in violin and viola, had studied at Juilliard and was beginning with recitals and small groups. People said he had talent and a future. He played in a band for relaxation and composed atonal pieces.

The host wanted them to walk to the Piazza Alta after lunch to get a feel of the old town. It was a nice day in spring. The younger man had limited time to visit with the friend of his father who had shared a profession and the disinclination to speak randomly.

When visitors come to Sarnano, they come for the festas, the concerts and the children’s performances, as well as the beauty seen from the road, outlined against the sky. The ovals of brick make a village that has persevered for close to a thousand years, survived book-ended plagues, wars, heat and  generations of the restless and settled. People said that Sarnano was the Italy of memory and grainy films in black and white. Strangers come for the day and do not hear that Sarnano is special in ways that many towns do not share. The resident was going to try to explain the sound and silence to his young friend.

“I want you to walk with me,” the old man said. “Tell me what you hear; you have the violin’s ear.” After thanking the restaurant chef for his skill and courtesy, they began to walk up the hill.

The way to the Piazza Alta was on the one drivable street, Via Leopardi. It went by Via Trento and Trieste, turned left on Della Costa. There are a number of routes to get to the church and the theatre that once were civil offices, but this was the easiest and most direct. Residents learned to live without cars. The essence of the town was recognized by one or two. More steps and steeper to avoid the people taking selfies with small white dogs. Construction cranes hung over all to answer the terremoto.

They came to the Piazza and it was as advertised, clean, imposing, quiet. The day before there had been a concert of Glenn Miller and Ennio Morricone; chairs and tables were stacked on the side near the drinking fountain. A no parking sign; paper and programs had been left on the ground and blown in circular patterns.

The centro storico was built on a rise of rock formed by the cooling earth and recurring adjustment of tectonic plates. There were lanes devised and constructed by men, in and out, all connected, interlaced. A compressed world, built to protect the citizens, near to God.

Dogs slept and padding cats looked for prey in the doorways and fenced gardens. If you came too close the cats would run and look back. Flags waved and gave the buildings a contrasting flash of colour. The flags snapped. The wind on bed sheets above them, drying on lines nailed to bricks below the windows, was soft and gentle. There is a difference in the way air turns corners of brick, funneling along the alleys.  It has been that way from the death of Leonardo of Pisa, the birth of Marco Polo and Dante Alighieri, dates important to the creation of Sarnano, when Popes offered salvation for a price and the years increased.

When the men paused, their footsteps lasted and repeated one or two beats. At times they felt a presence and turned; the path was empty and they were alone, did not see ghosts standing off and smiling. There was a disparity in the sounds of day turning to night, an accentuated sharpness and clarity as the sun slipped between the  houses. The night erased visual clues, the distance of time.

It was impossible to separate the years. Only the occasional car, scooter, the taste of diesel from vehicles picking up chairs and waste give a hint, traffic from the  new road beside the centro, the hiss of exhaust from heating boilers. The consistency of  centuries; a person with glass in hand will mistake the era. Bells ringing on the hour and birds sitting their perches, chimes the loudest sound in the centro.

The retired man whose vision was less than perfect, felt and saw horses driven, men walking with tools and laboring under burden, children hiding from each other and laughing, flying kites to imitate birds. Time mingled in sauces crafted over fire, stirred with wooden spoons by stout women testing perfection.

Time flows like water. You believe and know that time is a river and wide, that it is possible to shift yourself if you find the right place on the bank to enter the stream, have faith, are persistent and the moment is correct.

The two men heard the squealing of children fighting pleasantly for toys, men speaking of pain, building and sport, women washing clothing on ribbed wooden panels next to fountains with flowing water. It was not just sound that filtered experience and the people who lived here and passed through the Brunforte and Castelvecchio Gates to cultivate the clay earth. It was water dripping from rain the night before, falling from terracotta roofs, striking stones men walked, shutters opening and locked in the night, the bakery fire stoked and smoking into the sky, quiet zephyrs over grates that carry waste to fields below the walls. The deaf man who swept the streets heard all this and said nothing.

The older man wore shoes with uneven soles made of plastic. The younger had leather because he had style and lived in New York. Their footwear touched the ground and the stones responded kindly; they were not iron stapled boots made for war. The square stones, smaller near the edges of the  paths, carefully placed and evened by hand, knew both. In the evening, street lamps that were weak buzzed like flies and years disappeared, rewound on an unseen spool. Electric lights exchanged for candles, cars for horses with vegetables carried on carts from the fields.

There is no absolute silence, there is muting and replacement. Jack hammers become picks and shovels. The sound of wheelbarrows for that of trucks. In man’s life there are things heard, spoken or buried and not meant to emerge. At night in sleep, there is the music of breathing, pleasure and nightmares. Nightmares should be contained and not allowed to pass the oak doors.

Drops of water hit rock and ripple down. Outside sounds and inside, absorbed by flesh and cloth. There is no gone, only change.

One walk became three over two days and it was time for the young man to leave. They had an espresso and something stronger at the Bar Centrale. The older man asked, “Did you hear the wind and the rest? The centro speaks for itself, the centro is the constant. You can understand it, find meaning? Can you put that on a writer’s staff? Tell your father hello.”

“I thank you. I will try to put music to paper. It has a melody and something behind. I will try to make sense in my mind. I don’t want to spoil it here, but I’m not concerned. Few will hear and fewer will consider. Don’t worry, you are safe.”

“Buon viaggio. Let me know what you think of Tuscany.”