Secrets (Once in Bologna)

It is in Bologna where one learns that looking out the window is the easiest way to be lost. 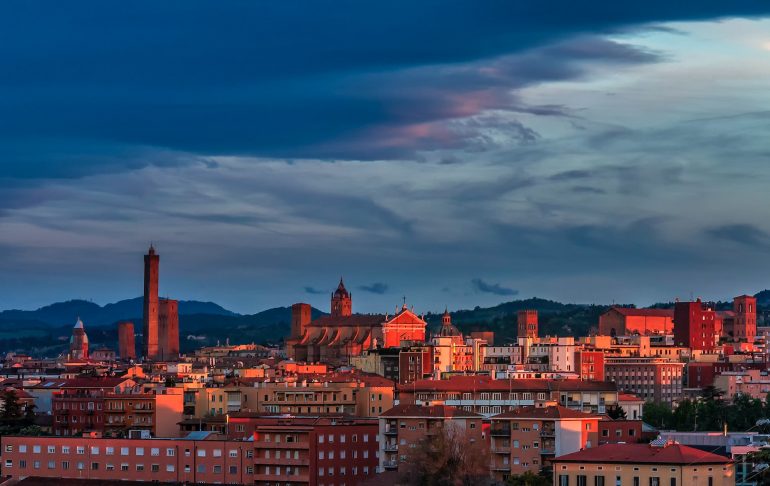 In Via D’Azeglio near the Basilica of San Petrognio, you’ll find the house of the great singer-songwriter Lucio Dalla. At the corner of the apartment building is a silhouette of the artist playing the saxophone surrounded by seagulls painted on the cream-colored wall facing the little square. Beside the image is the balcony where a red tenda (outer curtain) covers the balcony door which obscures the view into the room where, probably, Lucio wrote some of the most memorable songs in the second-half of the twentieth century in Italy.

A portable Yamaha keyboard and a tiny amplifier in the middle of the square. But the musician is nowhere to be found. I would like to know the song he is going to play. For now the song remains a secret.

Because keeping secrets is the center of life in Bologna. For what are the long endless arcades for if not to protect the inhabitants from exposure? In no other city is life lived unobtrusively and inexplicably beneath the arcades than in Bologna. Everything begins and ends in the shelter of the arcades: friendships, romance, fights, politics, studies, arts, diet, religious observances, amusements, etc. Sinners and saints, the employed and the homeless, friends and enemies, visitors and locals walk past each other brushing arms, exchanging glances, consciously alert not to expose one’s secrets.

I have looked into one of the secrets of Bologna (how many secrets does a city keep? seven? A hundred? An infinite number perhaps). Into the window on Via Piella. It is in Bologna where one learns that looking out the window is the easiest way to be lost. Who can tell if what you’re seeing through the window is in Bologna and not some neighborhood canal in Venice, or in Genova, or in Livorno? A city so far from the sea and yet speaks so eloquently of the mysteries of water. This is the romance you see through the window on Via Piella.

There is a particular vivacity unique to this city. Nothing portly or dull. The byways and street corners are wrought with colorful alimentari (food shops), gay restaurants, the dimly-lit bookshops, the cozy cafés where one is amazed by Italians’ love for endless talk, and the intense university atmosphere of tolerance, infinite youth, and cosmopolitanism.

This vivacity is as old as the university which was founded in 1088. Even the saints in this city are vivacious. Go to Pinacoteca Nazionale and observe the polyptychs and panels of early 14th century artists Vitale da Bologna and Simone dei Crocifissi. There is nothing gloomy or severe in their rendition of religious scenes; their saints have dashing and handsome faces, their clothes are glossy and rich-looking and their sensual smiles contain a secret pride, a kind of exclusivity, an elemental self-consciousness that separate them from the austerity and religious brooding of the period. There is nothing saintly in them except their names.

On our first night in Bologna we encountered a student protest in Via Zamboni. About a hundred students took to the street. One of the marchers screamed through a hand speaker; “The State and the bosses are murderers” written in huge black letters on a white long banner. At the end of the street a small detachment of police was on post in case of a riot—which is part of the intensity of this city. There were clouds of suffocating smoke from a burning tin pail. With the smoke it was difficult to track the faces of the protestors—this perhaps was part of the strategy.

During the day on that same street enter Palazzo Poggi and look for the inscription “Panum Resis” engraved in one of the chairs which translates to the bread of resistance which means knowledge is the foundation of everything. In Aristotelian syllogism one can decipher this pertinent inscription as resistance is knowledge. This is the widely held secret of the university students.

A city of secrets but doesn’t know how to keep them. Because when you pass by Piazza Maggiore (immortalized by Lucio Dalla in the song Piazza Grande) you are welcomed by the sky again, and the burden of keeping secrets is once again released into the air through gossips and rumors as neighbors and friends are brought into a willed pressure of small talk and the therapeutic habit of exposing your neighbor’s secrets.

There is an old man sitting on the wide step of the Basilica; one elbow propped on the knee, his chin leaning on the palm of his right hand; on his left a Marlboro cigarette is burning. The look of his creased face betrays his thoughts: he is thinking of the paintings of the Bolognese painter Giorgio Morandi, a dead uncle who keeps visiting his dreams, the long period of workers’ control of many industries after the war, the local bread tigelle with mortadella, the poetry of Pasolini, the beautiful waitress in the restaurant where he had his lunch, and the secrets behind the red tenda that surrounds him. As he brings the cigarette close to his lips he discovers partially the nature why people keep secrets, whether our own or others.

Maybe because, apart from the pride of knowing something others don’t, secrets make life more interesting. There is something inexplicably nourishing in nursing an inner controversy, a heresy of some sort, a certain guilt or shame, a subversive knowledge like an erection one experiences beside a beautiful stranger. Speaking of erection go to Piazza del Nettuno next to Piazza Maggiore. Stand at the back of the statue near Sala Borsa with your back to Via Indipendenza; adjust your position from a certain angle until you glimpse the statue’s outstretched thumb of his left hand becomes an erect penis! That, too, is a secret!

Returning to Via D’Azeglio of Lucio Dalla in late afternoon, the Christmas lanterns across above the street are already lit. Despite the soaring cost of gas and electric bills which is the palpable worry of every working Italian the air is imbued with the swaggering joy of the coming holidays. People clustered in shops for gifts and bars and pubs hummed with profane talks and aperitivo. In the little square the street musician is singing a favorite Lucio Dalla song; a few passersby stop by to sing along.

Per continuare a sperare

On the balcony of Lucio’s house the red tenda is unraveled. There is light inside the room. I begin to understand something of the secret of this city.

We believe in telling quality stories about political, cultural, and social life in Italy, free from paywalls or (too many) ads. If you enjoy reading, we hope you’ll consider donating to keep reading your favorite articles.
Donate