In Sarnano's centro storico it is quiet, dark and cold at the end of December. Lamps are turned off to save electricity. Strands of light from the television seep into the kitchen. A man prepares the Christmas Eve dinner... 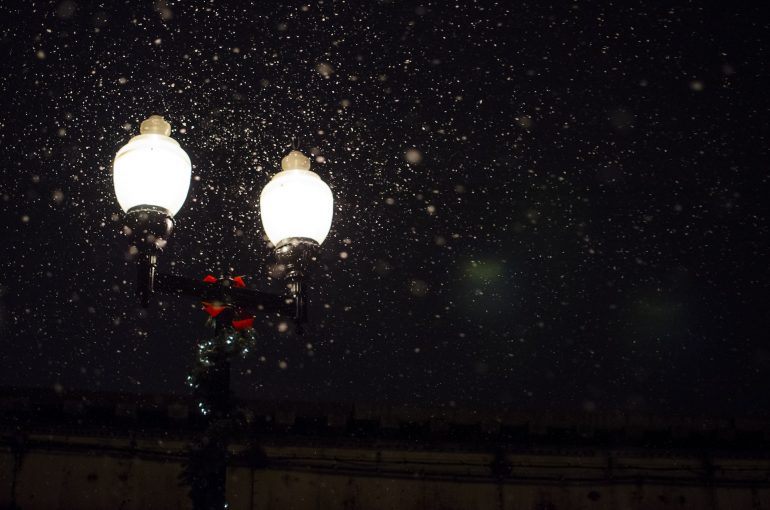 Daylight savings time is finished and the sky turns black before five P.M. In Sarnano’s centro storico it is quiet, dark and cold at the end of December. Lamps are turned off to save electricity. Strands of light from the television seep into the kitchen.

For dinner this Christmas eve he made a chicken dish in cream sauce with broccoli, roast carrots and parmesan mashed potatoes and drank a boxed white wine picked up at the local Coal Supermercato. He could have had something more elegant but the colour was rich and the taste full. He drank most of the wine and left the carton on the counter.

In the late 1970’s, the Canadian Broadcasting Corporation began a series of narrated stories before the Christmas holidays. “The Gift Of The Magi” is the first, and the final, each and every year, is “The Shepherd” by Frederick Forsyth. A WW2 Mosquito fighter bomber, the twin engine piston aircraft made of wood, guides to a safe landing a lost De Havilland Vampire military jet returning to England from Germany in the 1950’s. It is a tale of fear and salvation and continues to be heard with the same actors in 2022, voices etched in steel that will survive decades into the future. I listen and weep.

Then a movie with stars from another century, filmed on a Hollywood sound set with palm trees and the Pacific Ocean not far from the back lot. The reality of illusion, “It’s a wonderful life.”

He washed the dishes, made the moka pot ready for the morning and turned off the pellet stove twenty minutes before he went to bed. It was his habit to get up early and take the dog into the shadowed lanes of the historic center, below the closed shutters of homes on three floors. The pulsing mini bulbs guide them. Morning was going to have difficulty entering the lanes between the thick walls. Activity in the town had slowed with the temperature’s drop over the past months. Night and silence were the sounds he heard.

The tile floors of the small apartment where he lived were cold. Even in high summer, they were cool. The cost of gas, electricity and wood pellets drives citizens to bed. The town is close to the mountains, built on rock, the elevation 600 meters above sea level.

He had come to Le Marche with his wife who died of a cerebral hemorrhage after happy months in the town. Now he lived by himself, a small closed cortile outside the door and a few neighbors near; the old woman who was spending more time with her children in Milan, the couple whose son drove a Triumph motorcycle in the retro style. The woman cleaned the bank at night and the man worked in an office, wore custom leather shoes, fashionable clothes and put his car in the far parking. The nature of the town made people equal. Living in 800 year old buildings does not encourage entitlement. Strong winds blow everyone’s flower pots and bushes over at the same time.

On the level above him a new couple had recently bought a flat; two black women and a small child. He intended to give them something as a welcome gift but he was undecided if it should be flowers or a large crostata. The child would prefer a sweet that would make her hands sticky and she could lick her fingers.

He went to bed, wearing socks for warmth under the sheets. They would come off when the bed was comfortable and the dog settled on the side of the room next to the outer wall. The maremmano puppy sighed and snored softly, reassuring to the man.

Sometimes he left the computer on. This evening he listened to Glenn Miller’s 1942 Christmas concert in Montgomery Alabama, was asleep in 5 minutes and the screen turned itself off. The church bells rang, muted by distance from the church of Santa Maria in the piazza alta.

For years he had nightmares of being chased through the jungle during his tour in the Vietnam war. He would thrash and moan, wake in a sweat, knowing the conclusion of the hunt. It was truth and a lie never shared. Whether by practice or accident, the calm in the village washed over him, a blessing after service in the corners of the world.

Tonight was different. It could have been the wine, movie, the season of Scrooge and Tiny Tim, the radio story of Forsyth. Tough to be an opening act for Christmas.

He slept, that he was sure of. A line of people in file walked towards him as moving pictures flickering out of sync with burn spots on the celluloid film. Words were formed; he heard nothing. He saw faces, space between the figures in sequence from his youth and life, players. Sometimes they paused.

Gray woman, grandmother, in a gray apartment. She sits on a ancient couch, staring at the wall, legs splayed and thin spotted arms, wearing a patched and threadbare house dress. An exhausted face, drained and lined, looking at empty picture frames in the dim light, eyes watering. Cabbage cooking and steam rise from a stove behind her, very long ago on another continent.

His parents and twin brother, now dead from cancer, a toddler, leashed with reins on verdant grass in a park named Lincoln with artificially landscaped hills. The leather harness restrain the boys who run in different directions, scrambling to freedom. Father has wire framed glasses and is balding; mother, young and earnest, white streaks in brown hair. She will die of rheumatic fever and strokes in her fifty second year. Now her eyes laugh with the children. The war is over. There will be no bombs dropping on Chicago.

Comes a boy climbing rough stranded rope in elementary school, pulling to the high beam hung from the ceiling, feet clasping the rope as he ascends. Face wet with effort, triumph and fright, he is ecstatic.

A teacher from the early school grades speaks to himself, looking out the classroom window through leafed trees to memory’s columns of men with weapons, wondering how he survived marching across Europe, regretting that he did.

Classmates at the maritime academy, short rows in squares, tan pants and pressed shirts. None of them could see fate on the horizon. They stood at attention, unfinished faces in the sun, before coats of varnish and cynicism are applied.

Grouping of years, the markers of family, home and entertainments. Figures passing, smiling and striding, flawed and damaged. Each one an ingredient written on life’s recipe cards, kept on the pantry shelf in a grease smudged yellow plastic box.

There are girls and women. The ones he never danced with at school from shyness, the nurses who came to the academy for sex and love, the young and beautiful on passenger ships looking for romance, adventures in the eastern seas. Lips to be explored, hands to be held. The best in the worst times. Scars, polished by clothing and years. The line continues. He wanted to speak with them, but they are silent. Lessons.

There were others, from the sea and after. Work, friends, adversaries, the ones who touched him. All this happened while he slept. A parade without a marshal following uphill roads. He wanted them to accept or deny, to acknowledge him.

He woke at 6 am, the vision rapidly fading, sat up and thought about the radio play and himself. The phantoms would come if called or necessary. All were shepherds, for good or ill, saving or not. The real, what ifs and might be, between safety and destruction. He was the sum of their parts.

The bells of the church ring the hour, on the sky lightening. In “ The Shepherd”, the pilot in the mosquito fighter lifted his hand and saluted, farewell and good luck. He turned his plane into the fog and was gone.

For the man in Sarnano, the moka pot was on the gas burner. He liked the aroma, the warmth of the cup and the dark liquid’s promise. The day was starting and he would see people go to church, children hide and seek in the piazzas.

Listen to this article read by Will Duchon