Ambiguities over Europe and clear neo-fascist sympathies in her party worry the establishment. So, what will Giorgia Meloni do now? 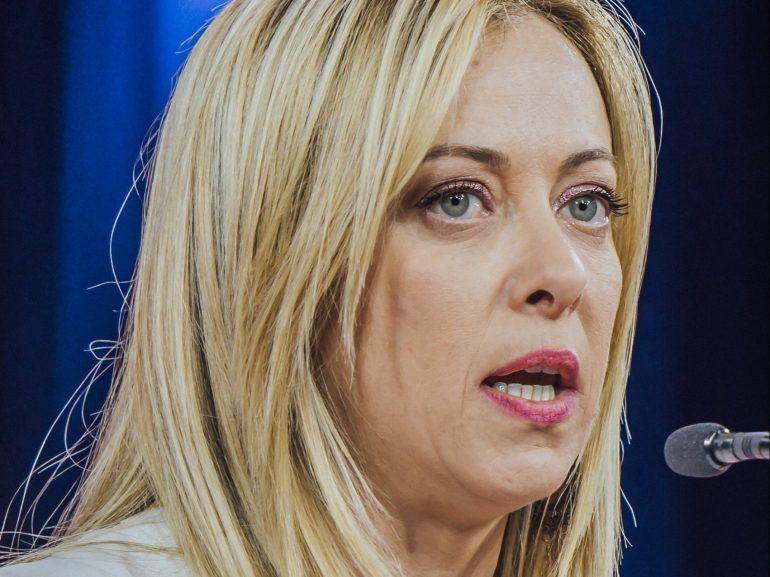 Giorgia Meloni and her party Fratelli d’Italia have won the elections in Italy with more than 26% of the vote. It’s a result that was confirmed as early as late yesterday evening. But it may have been clear for some time, since no one throughout the campaign gave any impression that they knew how to stop her.

The scattered race of the left and center-left alignments that failed to team up in the end gave her a more than smooth victory. The result, therefore, is that Italy will in a few days see the installation of a right-wing — or, more accurately perhaps, far-right government. As the foreign press makes clear, this is a “post-fascist” government, “the most right-wing government since Mussolini.”

With this result and bolstered by an electoral law that for 1/3 of the seats awards victory with the majority system, the right-wing coalition won in practically all the uninominal constituencies. As a result, it managed to achieve an absolute majority in both chambers.

Giorgia Meloni will be the first female premier in Italy’s political history, and in the coming days she will be tasked with shaping a government that will be mainly represented by Fratelli d’Italia. The other two parties in coalition with her do not emerge well from this electoral contest. Neither party has yet achieved more than 9% of preferences — representing a collapse in support in particular for Matteo Salvini’s Lega. In 2019, at the European elections, his party had taken 34.3% of preferences.

Who is Giorgia Meloni ?

Giorgia Meloni is not a new figure in the Italian political establishment. She began her political career back in 1992, in the ranks of the Fronte della Gioventù, a youth organization of the Movimento Sociale Italiano (MSI) — a gathering party of those nostalgic for fascism — that later became Azione Giovani. In 2004 she became president of this organization (the first woman to achieve this) and in 2006 she entered parliament for the first time as the youngest deputy of the 15th legislature.

In her early 30s she became minister for youth in the government led by Silvio Berlusconi — one of her current coalition partners — as a member of the party Alleanza Nazionale (National Alliance), a rebranded form of MSI. In 2012, along with colleagues from National Alliance, she founded Fratelli d’Italia.

Since then, she has led a party that has seen incredible growth. She has written a book that has sold 100,000 copies and managed to grow her party’s results from a paltry 4.3% in 2018 to 26% yesterday. She calls herself a woman, a mother, and a Christian, and, she writes in her program that she wants to defend “Europe’s classical and Judeo-Christian historical and cultural roots and identities.”

More specifically, she is against immigration (in all its forms) and proposes a naval blockade to stop any arrival of migrants into Italy. On civil rights, there is similarly little flexibility: no to ius soli, ius scholae, or any law against homo-lesbo-transphobia. When she talks about women’s rights, she talks about “the right not to abort.” When she talks about families, her value horizon is one mother and one father who should be assured all rights and support. For others, there are civil unions and a pat on the back.

During the pandemic she fought against almost every form of control and especially against the green pass, occasionally winking at the whole no-vax voting pool.

Hers is a party that lays its foundation and political tradition in post-fascist cultural and symbolic references. The tricolor flame in the party’s logo is of clear neo- and post-fascist inspiration — present as it was in the symbolism of the MSI — and several journalistic inquiries have highlighted the affection of many party members toward the Roman salute, the Duce, and anti-Semitic jokes. Meloni has never, in fact, accepted a confrontation or discussion on the matter and recently dismissed it by saying that “the Italian right has consigned fascism to history for decades now, unambiguously condemning the deprivation of democracy and the infamous anti-Jewish laws.”

Her positions are certainly extreme in many respects, but during the election campaign she has tried to reassure the establishment about her Atlanticist and anti-Putin alignment — despite international friendships with Viktor Orbn in Hungary, the ultraconservative Polish Mateusz Morawiecki, Donald Trump, and the far-right Spanish party Vox. Her avowed Atlanticism, in fact, does not exactly sit comfortably with her Europeanist credentials, which are skeptical and ambiguous. There’s no longer any talk of leaving Europe, but the proposals remain for a Europe that takes into account national interests first from a sovereignist perspective and then everything else.

What can we expect from Giorgia Meloni?

Given this picture of the almost premier Meloni, it’s very difficult to say with certainty what her first and most important moves will be. What’s certain is that she won’t be able to waste any time at all: by December 31 her government is called to respond to the first major challenge, the approval of the Budget Law.

In general, I think the best summary of the possible scenarios and which Meloni we can expect in government was outlined today by journalist Annalisa Cuzzocrea in La Stampa: “Before she goes up to the Hill to Sergio Mattarella [the Italian President of the Republic] for herself and in the name of the coalition that won the elections, she will have to choose which mask to wear: that of the modern conservative leader with which she has tried to reassure Europe and markets, the right-wing guardian of traditional values and borders, or the braggart who in the days of electoral silence places crosses on the symbol of Fratelli d’Italia and puts melons on display as if at the market.”

Only time will tell precisely which Giorgia will be leading Italy.