The Italian Axiom: Crisis & ‘Rossobruni’ Who Don’t Keep In Line

Propaganda and ‘Rossobrunismo’ worry and dishearten the young and the old. 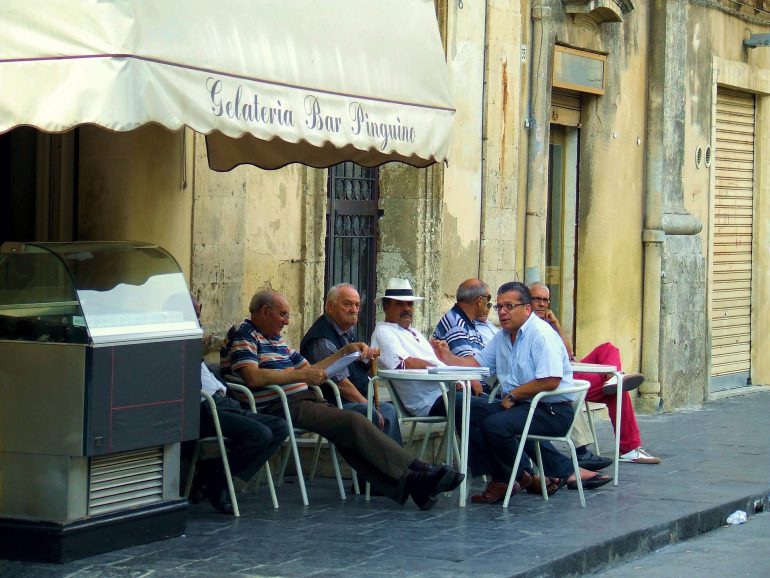 Men sitting in a café in Italy. Photo: Tibor Janosi Mozes, via Pixabay.

Every once in a while we hear the words government crisis and Italy in the same sentence and, in fact, here we are. This June the election saw a low turnout, with only 54% of Italians going to the polls to elect their mayors. The issue raised concerns ahead of the 2023 general elections, which are now expected to come earlier this year: on September 25 Italians will go to the polls again after the recent government crisis, and both old and young worry about what’s going to happen, especially after the rising number of ‘rossobruni’.

Politics reached a low-point last week in Italy when Premier Mario Draghi blitz era came to an end and shocked the whole of Europe. There was no possibility for cobbling together another government given the coalition’s break, even if Draghi tried to underline the specific situation in which Italy stands and urged the importance of the “the superior interests” of the nation. However, the three key parties — the center right Forza Italia lead by former Premier Silvio Berlusconi and two larger parties, the right wing League of Matteo Salvini and the populist 5-Star Movement led by Conte — refused to renew support in a confidence vote.

The most worrying consequence of this new unexpected political situation is of course the worsening of the economic situation. The NextGenerationEU funds are flowing in, however this second semester projects need to take place, and the schedule should be respected, even if the European recession and the galloping inflation makes it very difficult to put it into practice.

Another consequence is the need for new elections and the main issues related to these sudden needs are mainly two: firstly, absenteeism, since people will be bombed for two quite hot months with election propaganda by all parties (it has already started and it’s difficult to ignore the 24/7 reiteration of the old-fashioned sentence ‘pension reform’), especially the right-wing parties, and may choose not to go voting as an opposition choice because they are tired of politicians and politics failing the population. Secondly, right-wing Brothers of Italy party seems a go-to for many voters, which would make Giorgia Meloni Premier, a scenario which is looking likely to happen. This might not shock us, but it did already shock most of Europe and beyond, with alarming headlines, especially in worried Germany.

How far right can the right be?

When Italians are let down by politics, they usually go right. Brothers of Italy has been the first right-wing party in the last two years and has made great progress. In general the right is ‘big’ and generally speaking united: Matteo Salvini’s populist-nationalist League is at third place in the polls, at 15%. Brothers of Italy has an alliance with the League and ex-PM Silvio Berlusconi’s Forza Italia, in fourth place at 8% behind the populist Five Star Movement.

Generally speaking, the right parties in Italy are an ‘electoral machine’ which makes it really probable for them to win the polls in September. And also, conservatism is well-liked. What makes Meloni the most suitable candidate is also the fact that, in opposition to the rest of the right wing, she displayed firm support for Ukraine and the Atlantic Alliance since the beginning of the invasion, which makes her more likeable than Berlusconi and Salvini who often showed their sympathy for Vladimir Putin. On the one hand, Salvini favors a softer line with Russia. On the other, Meloni is assertively backing the cabinet’s Atlantic policy.

But can we really trust the right-wing? Apart from having a militant past in the case of Meloni, it proved itself to be very relativistic regarding anything that happens, doesn’t believe in facts sometimes and often removes real problems saying that everything is plotted. Parties on the right are successful in Italy because they proved to have the ability to create artificial contrasts such as no vax/pro vax, pro Russia/pro Ukraine, and attract consensus with their openly blatant and social dialectic. Meloni’s narrative moves from the fact that its party is close to people because she is a person like everyone and the State is not giving people all the information, making her electors feel understood.

‘Rossobrunismo’ on the substrate and what’s left of the left

Contrasts are loved by scheming politicians, but dividing right and left in Italy doesn’t seem to make much sense anymore. In fact different parties (for some time now) are opening a dialogue that can be dangerous at election time: the most recent headlines are shouting the case of ‘Rossobrunismo’. This phenomenon happens when distant parties suddenly start to agree on key ideological issues — for example, when a far right party uses rhetoric and language which sounds left wing, or when the radical left shows increasingly far right positions in different contexts, for instance the support of the autocrat Putin. These schematic political moves are not welcome in a difficult time like ours. Rossobruni politicians love conspirations and schemes and wink at nationalists while seconding partisans. The aim is to create an anti-globalist and anti-imperialist front by breaking the classic right/left division, which from some time now is quite blurry. Better to keep our guard up, especially in Italy, where more and more conservative faces spring up.

But when it comes down to the act of voting, being clear which way to go is quite important, if there is even an alternative way. Is there another option to the well-placed Meloni? What will the left wing do this summer? The moderated left, if we may call it so, is very much fragmented and if it finds any overlapping it’s due to the sole need to defy the highly visible right wing. The best chance to win is to present itself and its coalition as pro-Draghi witnesses, focusing on the pressing financial matters that President Mattarella highlighted so far.

Di Maio professes himself the moderate alternative to extremism led by Conte and the far right. Letta of the Democratic Party refuses to join forces with Di Maio but open his arms to Brunetta as well as Renzi, proposing the party to be the left centrist main option, with the main slogan “the country shall choose us or Meloni.” Everyone is looking for playground friends since whoever gets the most votes wins: if they have a coalition they have a better chance of winning, while lone wolves risk collapse. The Democratic Party however needs to choose properly its allies if it wants to have a chance, since it’s speaking to both young and adult Italians with starvation wages, and less and less eager to go to the polls. Will what’s left of the left be a concrete alternative to the far right without the stature of leaders like Mario Draghi?