Political disagreement and maneuverings in the cabinet forced Mario Draghi to resign as Prime Minister of a national unity government. Italy will now hold a snap election in September. 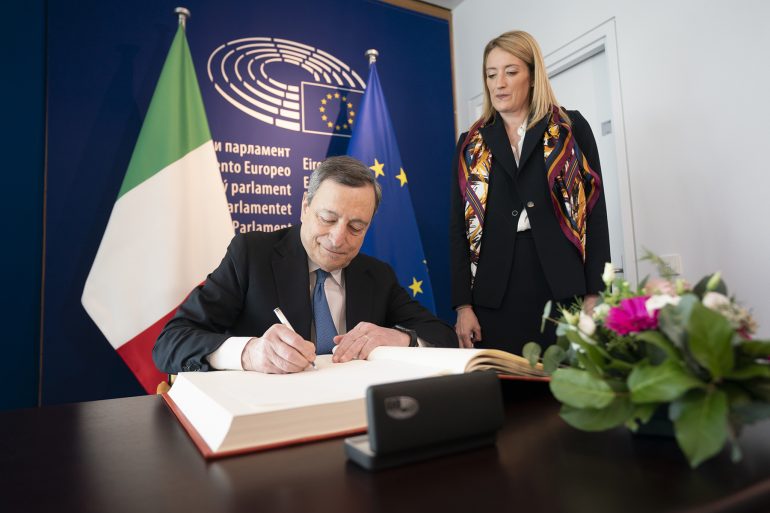 Many pundits have noted how strange the present crisis has been, how quickly events gathered pace — and how suddenly the government collapsed. But what’s not strange is how, while the wide range of opposing political forces may have brought instability, no one individual alone can be held responsible for the crisis. From Mario Draghi himself to parties supporting his cabinet, everyone shares the blame for the setback.

In fact, when parties discovered disaster was imminent, they worked behind the scenes to blame everyone other than themselves. In the end, although nobody wanted the government to crumble, the crisis was inevitable — hardly strange at all.

A crisis waiting to happen

Movimento 5 Stelle (M5S, the ‘Five Star Movement’), a populist force led by former Prime Minister Giuseppe Conte, first triggered the crisis by abstaining on a confidence vote in the Senate on July 14. The vote concerned a bill supporting families and firms suffering from inflation and staggering energy prices, but tensions between the government and the M5S had been escalating for weeks. Previously, M5S had strongly opposed the cabinet for sending weapons to Ukraine and for amending the universal income.

Pundits believe Giuseppe Conte wanted to pressure Mario Draghi in order to acquire more influence and consensus among the public. Polls were already depicting a grim scenario for the party, with its popularity steadily dropping for months. In the throes of this crisis, Conte took a risk: abstain in the confidence vote to get more concessions and recover popularity.

The risk didn’t play off, and the prospects for M5S at the next election look bleak.

Although it was the M5S that sparked the crisis, there’s no doubt that the stance of Matteo Salvini and his hard-right party, Lega (‘the League’), already represented a significant concern for the government. On the one hand, he and his lawmakers supported Mario Draghi and his cabinet. On the other, Matteo Salvini was at daggers drawn with Giorgia Meloni, chief of the largest party that wasn’t in the coalition, Fratelli d’Italia (FdI, ‘Brothers of Italy’), for the leadership of the right-wing.

In short, Salvini’s attitude was increasingly eroding the power of the government, as Lega — again to recover dwindling popularity — was acting as an opposition party inside the same majority supporting the cabinet Matteo Salvini’s group has seen its consensus dwindling for months, as many supporters sought the more consistent, and more right-wing, FdI.

When M5S abstained in an initial confidence vote, Mario Draghi delivered his resignation to the Republic’s President Sergio Mattarella, who asked the Prime Minister to return to Parliament to recover support for his cabinet.

Draghi did as he was told. On July 20 the Prime Minister gave his speech to the Senate. At first, he praised the forces supporting the cabinet. But his discourse became progressively harsher and stiffer, as he delivered severe criticism toward Lega and other parties for their ambiguous stance in supporting the government. In the end, he asked parliament to renew support for his government, claiming that ­“you shouldn’t answer me, but to all the Italians who wanted me here.”

Unsurprisingly, Draghi’s tone didn’t find the approval of the center-right parties supporting the government (Lega and Forza Italia, led by Silvio Berlusconi). But he took the opportunity to demand the exclusion of M5S from the government, a condition that Mario Draghi couldn’t accept since his cabinet intended to bring all parties into the fold.

Consequently, when the Senate held a new confidence vote to end divisions and renew the alliance, it’s right-wing and the M5S left the stage. The confidence vote passed, but the cabinet was over since the mission of mustering all parties failed. The Prime Minister resigned and the President Sergio Mattarella announced new elections on September 25.

As we said above, no-one comes out of the crisis without their share of blame. Sure, we should blame the parties’ behavior, since they were all preparing for the incoming 2023 elections rather than supporting the cabinet. But we should consider Mario Draghi’s stance towards the groups supporting his action. In fact, not only did newspapers represent him as increasingly intolerant of parties and their squabbles, but he also made his feelings public when blasting those parties of whom he sought support. According to pundits, if Mario Draghi had tossed a few crumbs and had not blamed parties so directly, his cabinet would have happily continued.

But was it Draghi’s job to mediate the squabbling of these parties, rather than focusing on the reforms the country needs? Ultimately, he asserted his will, but lost because he didn’t want to cut deals with quarreling and untrustworthy leaders. Besides, finding a middle ground with parties would have severely weakened the government, as they would have had a tool in hand to blackmail the cabinet each time a difficult choice or reform was on the table.

Although polls indeed point to victory for the bloc of conservative, hard-right parties, nothing is quite as simple as it seems.

On the one hand, the right coalition finds its two leaders, Matteo Salvini and Giorgia Meloni, at odds with each other for the coalition’s leadership. Just as support for the Lega dramatically fell away, Fratelli d’Italia saw its popularity snowball. Thanks to promises of playing hard ball against migrants, Islam, LGBTQ+ people, and crime, Meloni’s stance as the only opposition party represented a huge boost for her image, increasing her popularity among the public five fold since the last elections. Her party now tops the polls.

On the other hand, the left bloc appears to be close to crisis. The leader of the Democratic Party, Enrico Letta, no longer wants to ally with M5S, as the Democrats blame the populists for Draghi’s fall. But they must find new allies to stand a chance against the right. Yet, the center bloc finds itself divided into a galaxy of small parties willing to back anyone who will follow Mario Draghi’s agenda. Will they ally with the Democrats?

It’s likely to be a fractious campaign where leaders will fight in the fierce summer heat. And while the premiership of Mario Draghi brought brief stability to a sick system of politics, the striving for turmoil and chaos has returned.