An Italian fast food chain traveling west and winding up in Los Angeles? It seemed random, an impossible dream, even absurd. But it turned out to be true. 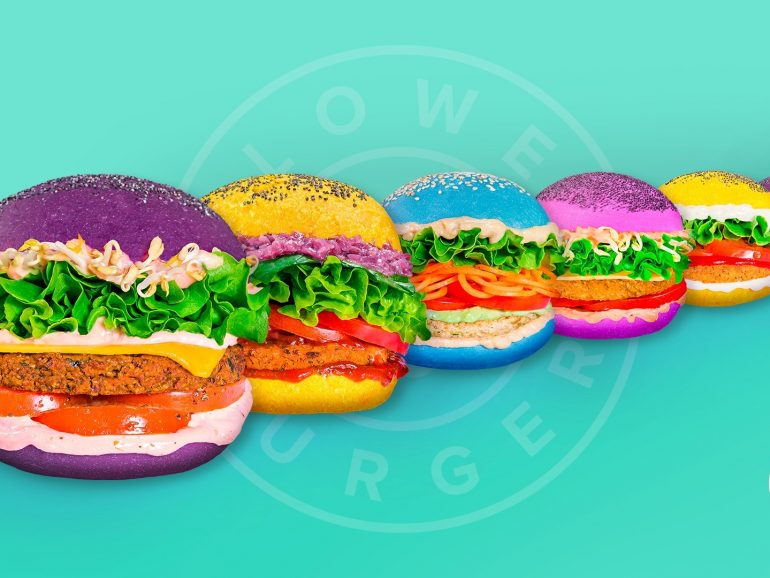 Some dream in black in white, others in color. In 2021, one entrepreneur’s rainbow dream was realized when she helped bring Italy’s first self-described veganburgheria to Los Angeles after being inspired by a visit to the fast casual restaurant on a trip to Rome.

Flower Burger’s brightly-colored buns, Instagram-ready design, and focus on plant-based fast food seemed like a good fit for LA, home to a see-and-be-seen culture as well as every niche diet under the sun. On the other hand, while Flower Burger may be Italy’s first chain restaurant dedicated to the vegan burger, it joined a long list of well-established vegan joints in LA. However, it stood out for its commitment to whole foods (bean and oat patties versus faux meat), and an inimitable Italian-ness that was recognizable — perhaps only to the trained eye, but there nonetheless — with certain ingredients that demand curiosity or knowledge of Italian foods. Tropea onion, anyone? Chocolate salame? Mayonnaise on potato wedges?

Not unlike the woman who made Flower Burger possible in LA, I discovered it on a visit to Bari last fall. After becoming a focaccia-holic, trying spaghetti all’assassina, and guzzling loads of extra virgin olive oil (the Coratina olive varietal quickly became my new favorite), my husband proposed a break from our daily vegetarian pasta routine and suggested we go out for a Flower Burger for intentionally plant-based cooking. I wanted to learn more about Italy’s response to the vegan movement, so off we went.

From the turmeric-infused bun and hearty chickpea patty to the Tropea onion tartare on the Spicy Cecio — not to mention the friendly service provided by the middle-aged man working the cash register — Flower Burger was not only a novelty, but a winner. The patatas buenas, with their nonsensical Spanish name and ample pour of ketchup and mayonnaise — a combination of American and Italian tastes on fries — summed up why this concept might work on the other side of the Atlantic. It was fun, tasty, relatively fast and plant-based.

A few weeks after I’d returned home to LA a casual search for vegan dining options later brought up Flower Burger in my search results. It had to be a coincidence of name choices. Fast food began as an American concept and, for better or worse, spread out to the rest of the world. An Italian fast food chain traveling west and winding up in Los Angeles? It seemed random, an impossible dream, even absurd. But it turned out to be true.

By summer of 2021, Flower Burger had opened a ghost kitchen in Culver City, and its rainbow of burgers — going by similar names and ingredients—were available for delivery or pick up from a back alley window. One visit to this hidden spot even led to a chance encounter with the burgheria’s Milan-based creator, Matteo Toto, who was in town to help set up the store. Toto launched Flower Burger in 2015, and it has since spread to nearly two dozen locations, most across Italy, with one in Marseille, France, one in Amsterdam, and a couple in England.

While the brand promotes fun vibes, happy energy, and of course invites constant photography of its food, it also manages to sneak in a small dose of the Slow Food principles that were created to counteract a world invaded by fast food.

The Slow Food movement developed in Bra, Italy in the 1980s under Carlo Petrini and other activists who were looking for a way to preserve Italy’s agriculture, food heritage and history as globalization brought American fast food overseas. Today’s movement further emphasizes not only the quality and appreciation for good, whole foods, but eco sustainability and fair work practices as well.

As a fast casual restaurant, Flower Burger could not be considered Slow Food on the whole. But from an American perspective on quality, they are distinctive. The West Hollywood store manager Danika Meheux recently explained: “We make the buns, patties, and sauces ourselves. The customers know what they are putting into their bodies.”

The website provides visuals of each ingredient in every burger; additives are not involved. Certain ingredients were imported from Italy, including the type 1 flour used in the buns, the Tropea onion tartare, the fruit mostarda, and the olive oil. Was it the most sustainable choice to fly in certain ingredients? Maybe not, but on the other hand it was certainly a way to control for better quality in a country that doesn’t have many regulations on food. Meheux added that Italian visitors to the LA restaurant were often relieved to know that ingredients were imported from Italy, since they knew that regulations were tighter on food in the European Union.

When the West Hollywood dine-in location finally opened in October 2021, I was excited to check it out. Flower Burger found itself on a quiet stretch of street in an otherwise lively neighborhood. With its fun and friendly look, complete with outdoor patio, it offered a respite from the trendy and overpriced dining options surrounding it. After only a few visits, I could tell they were doing more than pumping out food, they were trying to sell Angelenos on the concept, imparting some knowledge about Italian food along the way. On the flip side, the wait in line often came to a halt while cashiers explained the burger options in detail. I could hear an unsolicited, though necessary, description about the Tropea onion tartare. Shouldn’t we all know what ingredients are in the food we’re about to eat?

Not everyone could handle the wait. On one visit, a worker bee on a hurried half-hour lunch break complained that her food wasn’t coming out fast enough. While understandable given the go, go, go aspect to US work life, I wondered if a 15 minute wait for a burger would have even registered as a complaint on the part of an Italian patron.

On yet another visit, Instagram influencers sat nearby, ring light passed around the table as they spent 20 minutes readying the scene to capture shots of their first bite, one which I worried they might never actually take. The patron base at this location was clearly mixed, but given the quirks of LA culture, it also seemed like the concept might work here.

Finally, on a breezy Friday night in July, I went back to Flower Burger, wanting to talk to customers. How did they find it? Did they hear about it on Eat it or Yeet It? Did they know it was Italian, and find that intriguing? And did it feel different to them than American vegan burger chains?

As I walked up to the storefront, something was amiss. Instead of seeing people chowing down on a Jungle or Truffle Beach Burger, I found a darkened interior and a lock box on the door. Had this been Italy, I might have assumed that the closure was temporary — perhaps staff was ill, or a personal emergency had occurred. Thanks to a neighboring business owner, I learned that Flower Burger had closed permanently and out of the blue only the week before.

Strange, but not totally surprising. I had been in touch with the manager two weeks earlier, and she had given no indication of the store’s impending closure, even suggesting that Flower Burger might expand within the States. On the other hand, when I asked an Italian PR representative for an interview, she told me they couldn’t comment on Flower Burger USA. Perhaps that was my clue. Sandwiched between restaurants borne of reality television in a city where the cost of living is sky-high, the competition was fierce to begin with.

Though the West Hollywood Flower Burger never made it to the one year mark, the operation was not in vain. LA Flower Burger fans (I know they are out there) may be a small but ardent group, who appreciated the novelty that Flower Burger added to LA’s vegan scene, but more importantly, enjoyed the Italian nuances that the menu brought to the city. One day, I hope that more of my fellow citizens will know about a town called Tropea and the sweet onion it is known for. It was daring for a fast food restaurant to bring that food concept to a place where burger toppings are typically ketchup, mustard and pickles, and onions are known only as yellow, white, red or sweet, all of them high in acidity.

Meanwhile, until further notice from the restaurant, it looks like those of us outside il bel paese will now have to travel back to the home of Slow Food to experience Italy’s colorful veganburgheria.