Italy has a longstanding theatrical heritage whose classics are inspiring artists all over the world. 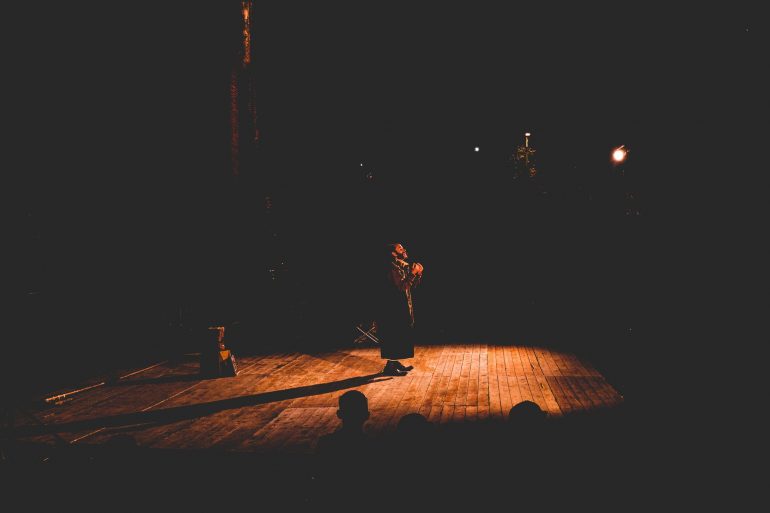 An actor takes the stage in Lonato, Brescia. Photo by antonio molinari on Unsplash

“My theater has always been a political battle on the stage.” This is a quote from Dario Fo. When the general public is asked to name an Italian playwright, his usually comes up. He’s been produced all over the world and won the Nobel Price in literature in 1997. His plays are absurdist comedies with social themes. Italy has always had a great theatrical tradition, it is, after all, the country of commedia dell’arte — which has inspired many, including Dario Fo. Ancient amphitheaters are still standing as witnesses of an era where spectacle was much different. Today, there are over 1000 theaters in the country.

There is definitely a school of what we might consider ‘classic plays’ written by playwrights during the Renaissance, but also 20th century plays. But what about new writing? Let’s say you wanted to see a play in Rome. You check Teatro.it. You will see a lot of Shakespeare, some stand-up or one person shows, but not a lot of contemporary writing.

If you type Italian playwrights on Google (do it), you will see a list of men, starting from the 18th century. A handful are alive and all in their 60s and 70s. Most of their plays are at least 20 years old. At Italics, we wondered about the new generation of playwrights — with their own political battles on the stage and their biases which reflect the world we live in today. This is my own investigation as an insider, a foreigner, looking on the inside.

For a lot of international theatre artists, Italy is considered one of the cradles of physical theatre. What we call object theatre, involves masks or puppetry but also visually told narratives. Two names stand out: Pipo Delbono and Emma Dante. Both have companies and their own theatricality. I remember seeing one of Pipo’s creations, Gioia, in the early 2000s in Paris. It was part circus and dance, part political play. He works with non-professional actors, and actors who come from marginalized backgrounds who are seldom represented on the stage: asylum seekers, or people with disabilities. Pipo and his company have toured all around the world.

At the same Parisian theatre, I had seen Emma Dante’s Le Pulle. The Sicilian director and playwright also has her own company and creates pieces that are edgy, playing with gender and social constructs. They are also highly physical and visual. I was mesmerized by Le Pulle. Almost a decade after, I still remember how it made me feel. The title means ‘whores’ in the dialect of Palermo. Using blow-up dolls, and men and women playing le pulle, she manages to create what she calls “an amoral operetta.” We go from one vignette to another, and meet all kinds of sex workers. Yet, the text, the actual play, doesn’t matter much. The vocabulary is physical.

One could argue that the same goes for Pipo Delbono. I was an acting student at the time and my classmates were dreaming to go to Italy to study masks, physical theatre, puppetry or commedia dell’arte. Yet, none of us had studied a contemporary Italian play — let’s say a family drama — the way we had approached contemporary American or Spanish playwrights. As I got older, I became a playwright, went to a myriad of European festivals supporting new writing, and even started to work as an actress in Italy. I can count on my hand the Italian plays I have seen from contemporary or up-and-coming playwrights.

There are obvious exceptions such as Alessandro Barico’s Novecento that has been translated in numerous languages and is produced all over the world. But he is primarily a novelist and he is not exactly up-and-coming. To add to this, my Italian friends who are not in the business also could not really name a new playwright. From traditions to today’s stages, what is the contemporary landscape when it comes to playwriting?

Creative writing and education in Italy: a long way to go

Let’s start at the beginning. How do you become a playwright in Italy? In general, in Europe, there are very few programs and universities offering a playwriting course. The most renowned ones are in the UK. But things have begun to change, and a lot of women were behind the initiative — Teatro delle Donne’s Centro Nazionale di Drammaturgia is located in Florence and has a library of plays written by women and translated in Italian. It is partnered with the Teatro Comunale Manzoni in Calenzano.

In 2004, the playwright and author Dacia Maraini set up a National School of Playwriting at the theatre. Today they still offer workshops. In Milan there is also the Centro Nazionale di Drammaturgia Contemporanea, which offers courses, runs a festival of contemporary voices, and in general champions new writing. Creative writing is also not taught widely in Italian public schools. This might explain why new plays and their development is slow.

When growing up in Italy, how does one wake up one day and decides to become a playwright or by extension a poet, a screenwriter? La Sapienza does offer a general course that includes both playwriting and directing. It is not a degree, however. As of recently Civica Scuola D’Arte Drammatica, located in Milan, offers a playwriting degree. But it’s an exception. This trend is common in many European countries. Often you become a playwright by accident.

How do you go from writing a play to having it produced then? In the English speaking world — specifically Canada, the US, or the UK — theaters have literary and development departments. They have open submissions, run writer groups and mentorship programs. In Italy there are palestre, aka writer’s gym, that one could sign up for and pay. But sending your play to a theater to be read? As a general rule, it’s rare.

A lot of producing opportunities are through production companies and networking — this is how things work in Italy very often, and theater is no exception. For theaters to champion new voices and contemporary plays, and change their development structures, we need audiences to follow. In general, attendance is low and niche: people whose buying power allows them to do cultural activities and prioritize them. Nearly 27% of Italians aged 18 or 19 went to the theater in 2020, for the older generation 18% of individuals aged 55 to 59 did the same. Sadly, this is a common trend outside of Italy as well.

Italian artists also move abroad driven by a desire to have access to more opportunities. In countries like the UK with a stronger appetite for new writing, Italian playwrights and theater artists have launched their own initiative, Italy Uncovered. A festival dedicated to a new generation of Italian playwrights. The 2008 financial crisis was the turning point for a group of Italian artists interested in questioning what this crisis meant. This led to the creation of  itinerant playwriting workshop — called Crisi (‘crisis’ or ‘crises’, both singular and plural). It was championed by Fausto Paravidino, an Italian director, actor and playwright who had received acclaimed productions in the UK.  “No pizza, no pasta, no ciao bella: Italian playwriting has undergone a renaissance in recent years, with a host of writers exploring contemporary Italian society with captivating stories as well as formal and stylistic innovation,” they write on their website.

Some of the playwrights they produced had won awards in Italy — like Maria Teresa Berardelli, who was the recipient of the Riccione Theatre Award. In New York, there is In Scena! a festival dedicated to Italian plays run by a Italian-American theater company, Kairos Theater. While these initiatives take place outside of Italy, the playwrights they produce are often based in the country. With a new landscape emerging, one can be certain that they will be produced locally and internationally.

Innovation takes bravery. For contemporary theater to strive, it takes more than a desire to shake things up. The arts are under-funded in almost every country. But the voices of today are just as important to preserve and invest in as those of the past.

Let’s wrap the show with this quote from Emma Dante, “Mankind needs to recognize itself, to ask itself questions, so I don’t think the theater will ever die”.

If you would like to share your thoughts on contemporary Italian theater, or suggest that our community of readers get familiar with some new playwrights, please let us know at editorial [at] italicsmag.com.