Dasà Rising: YouTubers And The Revival Of A Rural Calabrian Village

What began as a lighthearted joke ended up with strangers traveling thousands of miles to break bread and encourage growth in a southern Italian village. 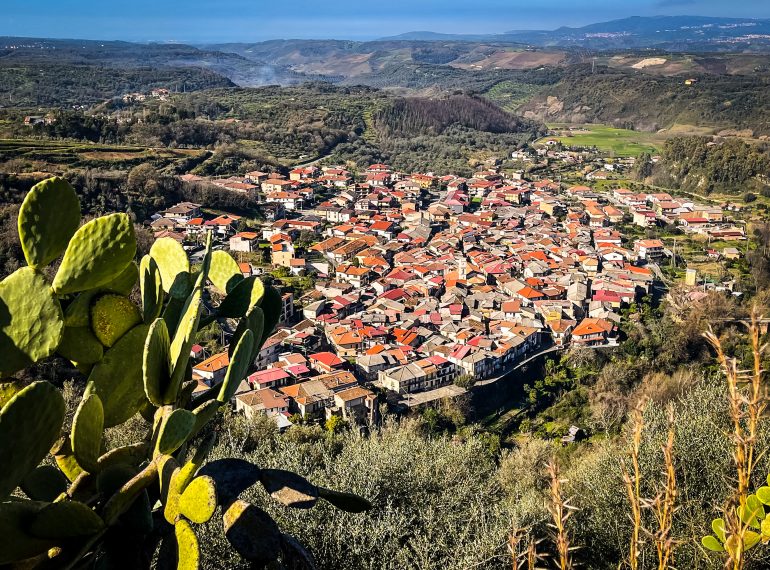 Dasà, as seen from above. Photo courtesy of Harper Alexander.

Every night for a week in April 2022, with terracotta wine cups raised high, this lively toast was sung by a group of Calabrians and a handful of Americans and a Spaniard — some who hardly spoke any Italian — who never would have been brought together if not for an American with a passion for filmmaking and his Calabrian wife with an even fiercer passion for her roots.

Could anyone have predicted that what began pre-pandemic as a lighthearted joke — making videos of an Italian woman’s reaction to Italian American food — would result in strangers traveling thousands of miles to break bread in Dasà, and unexpectedly encourage growth in this southern Italian village?

Pasta Grammar appeared on YouTube in early 2020, started on a lark by filmmaker Harper Alexander, who thought it would be entertaining to post videos about the countless rules of Italian cooking that he learned after living with his wife, Calabrian Eva Santaguida. Two and a half years and over 205,000 subscribers later, they have achieved an unexpected level of success that turned their hobby into a career. Now they are often recognized where they live in Tucson, Arizona, on airplanes, or on location in Italy, where they spend a good part of the year creating videos, visiting family and friends, and hosting sold-out tours of Santaguida’s homeland.

Initially they earned views for reaction videos, like the one where Harper asks his wife to try Domino’s pizza (spoiler alert, she has some strong words about pineapple on pizza). But their momentum grew with a devoted fan base as they focused more on Eva’s talent in the kitchen, where she shares both Calabrian and Italian recipes, along with related traditions and history. This was especially welcome during a global pandemic when Italophiles around the world could only travel through their screens.

During the fall of 2021, Eva and Harper embarked on a new venture, using their popularity as YouTubers to pursue Santaguida’s dream of leading tours in Italy. They brought a small group of fans to Naples, winding through Calabria by way of Tropea, and touching down as far south as Taormina in Sicily.

Then Alexander thought about inviting fans to spend a week in Eva’s hometown, Dasà, located in the Vibo Valentia province of Calabria.

“Being the only outsider who had…lived there and experienced what it was like, and compared that to normal tourist travel in Italy, I was the one who was like, I want other people to see this and experience that,” he said.

Dasà, with a population of anywhere between 700 and 1,100 (accurate population counts are hard to come by as many, like Santaguida, are included in the official numbers but don’t live in town year-round), has no hotels or restaurants, so Eva and Harper enlisted a travel agency and family and friends to plan transportation, local accommodations, and meals for guests. They also involved Santaguida’s mother, who oversaw a non-profit organization, Dasos Elies, appointing locals to be in charge of the cultural promotion of Dasà.

For one week in April 2022, the quiet village came to life in a new way, with the Dasaesi engaging foreigners in everyday activities like making fresh pasta, milking goats and making ricotta with a local dairy farmer, touring local olive groves, and sharing meals every day at La Locanda, an osteria that Dasos Elies and Pasta Grammar helped fix up to make fully functional for guests. Long repasts were spent in good company to eat and learn more about the food that initially inspired this tour group — maccarruna con suriaca (semolina pasta with local beans), the famed ‘nduja (a spicy, spreadable salame), and locally harvested Ottobriatico olive oil, to name a few. It was washed down with wine and song.

All of this, prepared by a dedicated and hardworking group of Dasaesi — people who were motivated not by money, but by the joy of celebrating their culture with a group of curious outsiders, as Alexander noted.

“What I realized is that it was so much more important for them on an emotional level than on an economic level. They were just so happy and thrilled to be able to share themselves. No one has ever come and asked them about curujicchi (Calabrian potato donuts). They were legitimately really happy to have people there.”

Population decline in southern Italy and revival in Dasà

While the Pasta Grammar immersion week provided a vacation for the foreign guests, it had an inspirational effect on the locals, leading them to think up new ways to draw more activity to their town.

Like other areas in southern Italy, Calabria is no stranger to population decline. Young people struggle to find work in small towns and villages, often leaving to take jobs in big cities in northern Italy or elsewhere in Europe. Yet with such a rich culture, the ties to their homeland remain strong, and if there was more opportunity for work, perhaps younger people would be inclined to stay.

Regional Italian governments have been offering programs to promote foreign investment in shrinking villages, such as the €1 home program, or even a 2021 announcement offering foreigners €33,000 over three years to start a business in one of ten Calabrian villages. But what about the Italians? What incentives are they being given to foster economic growth in their hometowns, the places where they were born and might naturally hope to work and live with their families?

After bringing the first group of tourists to Dasà, that question has more relevance for Pasta Grammar, as well as their friends and family.

“In these small Italian towns, you don’t often see a lot of hope for the future, and this year [following the preparation and April tour], I’d never seen the town like that. They were just so, so hopeful for the future, which was cool. We’d like to see that continue,” Alexander explained.

Dasos Elies has expanded their efforts to preserve Dasà’s culture year-round. Soon they will host a group of immigrants at La Locanda for a cross-cultural food exchange. The Calabrians will share their pasta-making technique one day and then learn to cook some of the foreign dishes from their new friends at the next gathering.

In 2023, Pasta Grammar is doubling their tour schedule, guiding fans through southern Italy and in Dasà during both spring and fall. They have plans to enhance the visits by incorporating the local wine and olive oil harvests into their Dasà program. And with over 150 tour requests and more coming in daily, they’re churning out new ideas that will keep them and Dasà’s townspeople busy for some time.

Among the projects they want to tackle: restoring the local grain mill that been lying dormant for years.

“We would love to see the experience evolve into being able to come and actually grind your own flour in a medieval mill. There’s an olive mill we’re trying to get working again. For us, it’s about what we can do for Dasà.”

Santaguida, who is also an Italian language teacher, wants to bring a language immersion program to town, teaching Italian in the morning and sharing cultural and seasonal activities in the afternoon, such as pasta-making or foraging for mushrooms.

“If someone was to learn Italian, a place like Dasà is perfect, because nobody speaks English [there]. So you have to speak Italian. It would be nice if we can organize Italian language class and Italian culture in Dasà.”

With the many projects awaiting them in Calabria, do they think about returning to Italy full-time soon?

“I love my country. I am Italian, 100%. But on the other side, I also recognize that I made more for myself and for my country from outside than from inside. I hope that I can go back and forth but bringing something new every time I go back.”

“As a person who had to go away from Dasà, it’s not always so easy,” Santaguida, who is now 40, added. “But if I can think that maybe, a [young woman] can have a future there, with a family, with the grandparents, can stay there and then travel to another world but always go back there. It’s something I would like to see happen for Dasà.”

As the outsider, Alexander considered their role in bringing new energy to his wife’s village.

“My hope is that these kinds of projects will help young people stay, and not only stay, but actually see the value in preserving their traditions. “Because those are definitely dying out with the younger generations who leave and they lose it. They don’t know how to make maccarruna and they don’t know how to make bread. If places like Dasà can see that your future kind of depends on preserving this thing that makes you special.”

With that Calabrian confidence, almost anything seems possible.