Can FC Südtirol Be The Symbol Of Unity Our Region Needs?

FC Südtirol are now in Serie B. But issues surrounding its name are complicating the club’s role as a potentially unifying symbol. 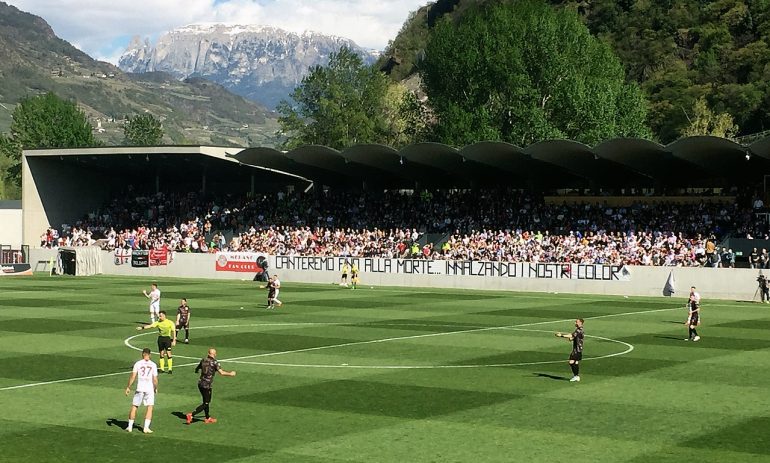 On April 24 of this year, after a thrilling ride that excited so many fans, the FC Südtirol team won the Serie C Italian football league. The celebrations in the city of Bolzano and the province were overwhelming: this had not happened on Bolzano soil for a good 70 years. For the decisive match, a big screen was set up in the city site where fairs are usually hosted, and after the victory, the team made a parade through the city.

Given these developments, one has to wonder what this victory means for the city of Bolzano — a bilingual region, partly German-speaking, partly Italian. There has been a lot of discussion about the soccer team, which tried to represent both souls of the city, without ever quite being able to unite them. Could this be the chance to make it?

The club has long been explicit — officially at least — about its desire to be a unifying factor not just for the city but for the province itself. One can read on the club website that the team wants to be “a model of integration for the three language groups present in South Tyrol. The stadium is a meeting point for Italian, German, and Ladin-speaking fans, and the goal is one: to cheer on one’s team.”

These statements of intent have been reinforced by other exhortations of harmony and unity among fans. In an interview a few weeks ago, the now-former coach Ivan Javorcic said, “If we want to compete with certain realities we have to be united, making the two souls (native Italian and German speakers) that there are in this beautiful territory stand together.”

Certainly, the victorious season has brought many people from all language groups to the stadium, and the team has gradually established itself as a symbol of the city and the province. In this regard, it’s important to mention that the captain, Hannes Fink, and other key players are themselves of South Tyrolean origin, if not actually from Bolzano. For example, there’s Simone Davi whose late mother, Paola Mazzali, was the symbol of Bolzano basketball to whom the arena is dedicated that stands right in front of the Druso stadium where her son plays and scores.

Problems of symbols and names

Beyond the official will to create a diverse and unified fan base, the reality is a little less rosy. The problem is that in a place like Bolzano and South Tyrol, symbols are historically not very unifying. Instead, where political and linguistic differences are involved, they tend to be contested and, in many cases, quite divisive. In this part of Italy, symbols have a heavy historical bearing, steeped in ethnic tensions that are only partially resolved.

Indeed, surrounding FC Südtirol, there’s been no shortage of fan controversy, promptly exploited by politicians. The main diatribe has developed around the ‘problem’ of the name of the team itself. The ‘Gradinata Nord Bolzano’ — i.e., one of the groups of ultras — has stated that they do not feel represented by the name FC Südtirol. Instead, they resent the lack of the label ‘Alto Adige’, which was present at the club’s birth in 1995 but that slowly disappeared from the official scorecards and the company logo after 2000 when the team transferred from Brixen (Bressanone, in Italian) to Bolzano.

This controversy has been further fomented by Alessandro Urzì, a provincial councilor for the far-right Fratelli d’Italia party (‘Brothers of Italy’ — it doesn’t take much to see where his interests might lie), who stated, “The fans are far ahead of the top management of the club, which uses soccer to impose a monolingual brand wanted by politics. This is how you keep the mass of Italian-speaking fans away from their ‘natural team’.” Strange claims to a ‘natural’ football allegiance aside, Urzì’s comments show that FC Südtirol is just as much a tool to sow division as it is a unifying force.

Admittedly, we can agree that a bilingual name may be legitimate. But it’s wondering where this might end. Are we sure, then, if the term Alto Adige were re-introduced, the dispute could end? Is there not a risk that, from the name, we would move on to other alleged issues, such as the linguistic make-up (majority German) of the board?

Our motivations in making these demands are crucial. Does one want to try to be more inclusive, or does one simply want to assert one’s own identity, in opposition to someone else’s? To be a unifying force, FC Südtirol needs to somehow extricate itself from this contestation between language groups, co-opted and fueled by parties who have an interest in maintaining strong identitarian distinctions. For them, it’s not the substance that matters but always and only the form, the label, the appearance.

Wouldn’t it be more useful to think about the fact, that in the city of Bolzano, both language groups can have a common idol, a figurehead who crosses or transcends barriers? Or that to develop the chants and song, there could be a process of Italians and Germans coming together? For example, while the management of the club is largely German-speaking, the choruses are mostly in Italian and refer mainly to FC Alto Adige.

In this divided region, names are important. But renaming FC Südtirol will hardly be the resolution of our problems. I don’t think, personally, there can be a coming together if we continue to clash around such static and monolithic identities — Italian, German — into which politics will always creep, demanding concessions but never considering what can be given or offered.

The victory of FC Südtirol tells us that today there’s a team that can represent a city or even a province, where boys from Bolzano or South Tyrol of both German and Italian mother-tongue can play. This is an opportunity for shared success, not another excuse to assert our political grievances.