In Juliet Grames’ latest novel, Stella must cope with being uprooted from rural Calabria and being an outsider in her new Connecticut home. Our interview with the author. 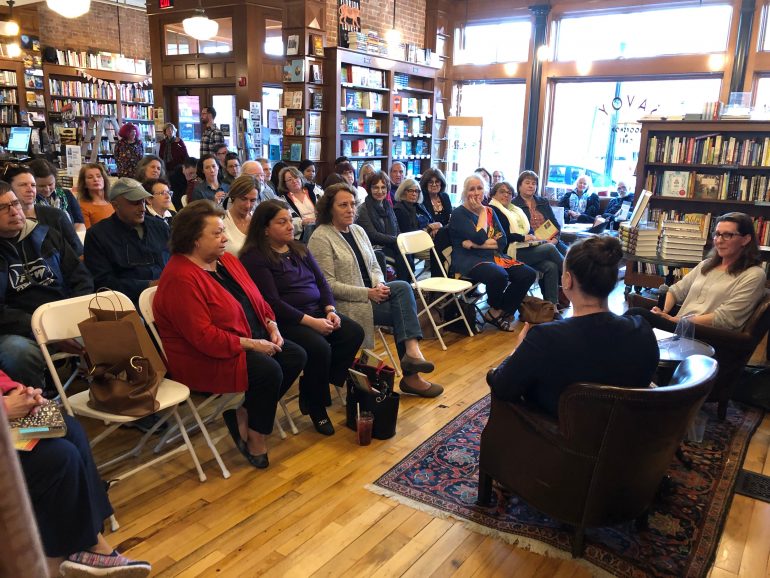 I met Juliet Grames in Lamezia Terme, in the Calabria region of southern Italy, at the launch of her debut novel, The Seven or Eight Deaths of Stella Fortuna (Ecco/HarperCollins).

Introduced to an attentive audience as Juliet Grames, born in Hartford, Connecticut, who grew up in a tight-knit Italian-American family. A book editor, she has spent the last decade at Soho Press, where she is associate publisher and curator of the Soho Crime imprint.
Juliet’s Italian was faltering but her communicative skills were such that we were happier to listen to her using it than avail of the interpreter provided. She spoke in honest terms about her own upbringing as an Italian-American and about the burden, pride and romance associated with her lineage. We listened enthralled to anecdotes about her lasting family connections and her reactions to returning to Calabria and could almost ‘hear’ the difficulties of her fictitious heroine, Stella, trying to communicate in a faltering English that would undoubtedly have been speckled with influences from the Calabrian dialect of her parents and of her close knit American community.

The summary reads: For Stella Fortuna, death has always been a part of life. Stella’s childhood is full of strange, life-threatening incidents — moments where ordinary situations like cooking eggplant or feeding the pigs inexplicably take lethal turns. Even Stella’s own mother is convinced that her daughter is cursed or haunted.

When the Fortunas emigrate to America on the cusp of World War II, Stella and Tina [her younger sister] must come of age side-by-side in a hostile new world with strict expectations for each of them. Soon Stella learns that her survival is worthless without the one thing her family will deny her at any cost: her independence.

Juliet graciously accepted an email interview with me.

Can you introduce Stella Fortuna to our readers?

Stella is a centenarian Italian-American woman born in the years after the First World War in a tiny village in what is now Lamezia Terme. The novel The Seven or Eight Deaths of Stella Fortuna looks back at the story of her long life through the framework of the 7 or 8 times she almost died, chronicling her hardscrabble childhood, the challenges of immigration to America, the dangers of family life and courtship, and above all her struggle to stay true to herself under all the pressures she faces.

Stella is, more allegorically, a representation of the challenges women faced in the long twentieth century, the everyday brutalities our grandmothers were expected to survive and take in stride. I invented Stella as a vehicle to commemorate the incredible chutzpah, humor, ruthlessness, and affection required of this incredible generation of women.

There have been many stories about people coping with their dual European-American identity. What makes this story different?

There are, indeed, many excellent novels about the immigrant experience, but I started writing this novel because none of the books I read told the story I was looking for. I wanted to read about the Italian South, from where my grandparents had immigrated. My grandparents loved their homeland; their leaving for America was an ambivalent, bittersweet, and painful decision. I wanted to read a story that didn’t sugarcoat their hardship or demonize their circumstances but instead celebrated the bravery we’ve been taught to bury and be ashamed of. I wanted to bring to light some of the issues that came up again and again during my interviews with Italian immigrant women and which Italian-American writers have been discouraged by their community from writing about honestly.

Was there any resentment among your fellow Italian Americans to your writing this harsh novel described as ‘ancient and twisted as the olive branch’?

There has been a little bit — there are people who fear the Italian-American community is still victimized by prejudice and who feel it is the responsibility of Italian-Americans to protect our image at all costs, which means not exposing some of the ugly aspects of unilateral patriarchy that have existed in our (and almost every) culture. But I have to say the vast majority of Italian and Italian-American readers, both male and female, have been incredibly supportive of this project. I believe most of us would love to see our mothers and grandmothers celebrated — perhaps, when necessary, for their reputations to be rehabilitated by re-examining the circumstances around their difficult choices.

When, as a child, you became aware of your Calabrian origin, was it a burden?

Not at all. As a child, I was intensely proud of my Italian origins, as I understood them from the cultural products my wonderful grandparents bestowed upon me. It was only as I grew up and tried to read and learn more about Calabria and what it meant to be Calabrian that I realized how misunderstood and under-celebrated my grandmother’s homeland was. I became fixated on the idea of offering another perspective.

When you first visited Calabria, did you find the villages and people of your fantasy or an indifferent reality?

There is something so intensely emotional about visiting the places where your immigrant forebears came from. Although my expectations (and nerves) for my first trip to Calabria had been very high, they were surpassed in every possible way. My grandmother had told me the village of Ievoli was beautiful, that the people were kind — and yet my imagination could not do justice. It is such a strange feeling, to be so tied to a place you have never known.

You mentioned the different approach to integration of the immigrant men and women in the USA. Can you explain?

Many men were not prepared for the changes that emigration brought to their own lives and families. Whereas women embraced the liberation that America offered, men wanted the Calabrian lifestyle to continue in the new environment. Some dreamed of making enough money to return to the paese, the village, and save their daughters from the contamination of the strange New World.

Do you think that, in your case, the Italian-American identity ends with your generation?

This is a fascinating question. I can easily see it going either way. On the one hand, the fourth generation after immigration is the one that often experiences the weakest cultural gifts from its parents — I don’t speak Italian very well, and have failed to raise my son bilingually, so already he is a step less Italian than I was at his age. But on the flip side, we have the educational resources our grandparents and even our parents did not have to active, sustained conversations about ethnic identity and what it means in our modern, globalized, racially diverse, socioeconomically challenged world. Will cultural identity mean even more or even less in 20 years? Maybe both. I am curious to watch this dialogue develop.

During our conversation, I mentioned an article I’d written in Italics Magazine on the role of a man Carlo Masi who worked as an emigration agent in the late 1960s. She asked for the link and later told me she’d read the article and observed that it was an interesting counterpoint to the ‘exploiting padrone’ narrative she often encountered in her research. Amazing how seemingly random things tend to connect!

It was a privilege to get these full answers to the questions that were milling around in my head as I listened to Juliet Grames’ presentation and it’s now a pleasure to share them with our readers. To use the writer’s own words about the meeting in Lamezia: “It was a dream come true, but also so surreal, to present a book I wrote about my grandmother, who had never had the chance to learn to read, in the town where she was born 100 years ago.”