The Federation of Damanhur

Yes, Italy has a real live cult of its own. It may come as a shock, but the Federation of Damanhur is a mostly underground artistic marvel. 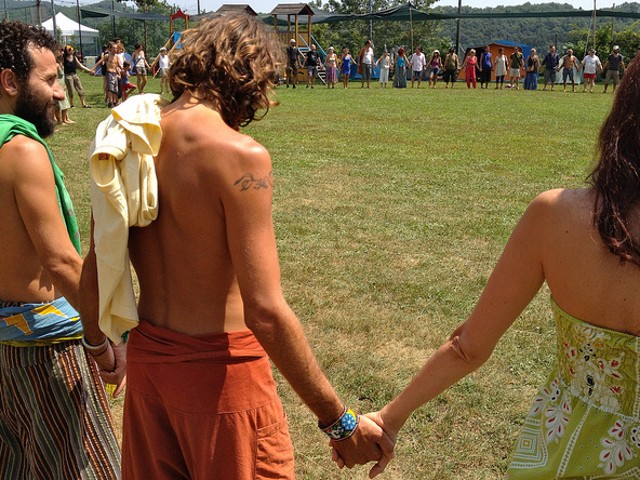 “We’re not a cult.” That may be one of the first disclaimers you hear if you rent a car in Turin and take the 45 minute drive north to Vidracco, where the Federation of Damanhur holds sway. Call it an ecovillage, a commune, or a spiritual collective, but the term “cult” is not a descriptor embraced by the roughly 600 people that live and work there. One may ponder whether this distancing effort is common among cults, but let us give them the benefit of the doubt as we learn more about this fascinating effort that has been evolving for four decades now.

Back in 1975, native piemontese Oberto Airaudi decided to establish Damanhur, a communal group rooted in the “ancient wisdom-magical tradition.” The name Damanhur itself does not ring very Italian, but instead was borrowed from the city of Damanhur in northern Egypt, a place dedicated to the ancient Egyptian god Horus. Airaudi had become something of an icon in the years leading up to Damanhur, gaining a significant following for his energy healing and contact with the spirit world. He was viewed as a special being or guru, having demonstrated supernatural abilities even at a young age. After a short stint as an insurance broker, Airaudi began to gather funding and support for his vision of a spiritual society that would ensure the renewal of humankind and prevent an ecological apocalypse. Taking the name of Falco Tarassaco, or Falcon Dandelion, he and his acolytes traveled around the world, searching for the perfect location along the “Synchronic Lines,” or energy streams that they believed criss-crossed the Earth and provided easier access to the mysteries of existence. Inexplicably, Falco determined that ground zero was in the Chiusella Valley, conveniently situated less than an hour from his stomping grounds in Turin. The group looked into permits to build an underground temple, but were told that such construction activity was illegal. Undeterred, they began working by night on a piece of farmland, removing hundreds of tons of dirt by the bucket, spreading it furtively so that no suspicion would be raised.

Over the course of fifteen backbreaking years, a truly astonishing structure began to take shape. Chambers and corridors spread out beneath the surface of the Chiusella hills, with some rooms having 25-foot vaulted ceilings. As excavation finished in one area, artists within the group would move in and begin adding richly imaginative murals depicting “gods from nearly every pantheon on Earth, from the Norse to the Hawaiian, even including the Abrahamic faiths.” Every decorative element imaginable from art and fantasy was incorporated, from masterful stained glass lit by artificial illumination to expansive mosaics and cleverly disguised secret doorways. There was a Hall of Mirrors featuring a Tiffany glass dome, a Hall of Spheres, a Hall of Water, a Hall of Earth, and even a Temple of Metal, among many other shrines and sanctuaries.

As the years passed, it became more and more challenging to keep Damanhur cloaked in secrecy. By 1992, suspicious neighbors had reported the activity in the area to the police, and on July 3rd, disaster struck. Carabinieri arrived with explosive experts, threatening to blow up the entire compound if they were prevented from entering. Falco and one of his lawyers quickly led the local procuratore capo on a guided tour of the underground network, explaining the motivation behind the undeniably bizarre undertaking. The magistrate emerged close to tears, awestruck by the beauty and ingenuity of the construction that had occurred. Despite his conversion, Damanhur still became embroiled in a serious legal challenge that took four years to resolve fully. With this hindrance overcome, the community settled into a new phase as a legitimate enterprise fully recognized by the Italian government. Not only did Damanhur expand around Vidracco, but affiliated centers sprang up like magic mushrooms in places as far afield as Japan and the United States.

People like Formica Coriandolo (Ant Coriander) were drawn to Damanhur by the harmony and goodness that is an essential part of the group’s philosophy. Everyone has a role to play to ensure that the community continues to be self-sufficient, and thus everyone can feel like a valued part of the whole. When interviewed during the throes of the COVID-19 pandemic, Formica emphasized that “We believe in human beings, in the potential that we have, the goodness that we carry.” Call it idealism or utopianism, but it has been powerful enough to cause both Italians and foreigners alike to give up their former lives and dedicate themselves to the mission of Damanhur. When Falco passed away in 2013 of cancer, his funeral drew thousands, but his guiding vision did not go to the grave with him. Unlike other cult leaders, he had made an effort to reduce his power as time went on, preferring to remain as a respected advisor to those that came after. This selflessness and willingness to work towards the greater good is a key element in Damanhur even 9 years after his death.

While Damanhur champions some eccentric views, like a belief in time travel across millennia or the importance of “listening” to the music plants produce through electromagnetic waves, for the most part the community has exerted a positive influence on both the local community and the many thousands of visitors who visit every year. It has continued to evolve into an increasingly complex society, with a constitution, elected officials, a separate currency, schools, and a self published newspaper. As a member was quoted as saying in Ross Robertson’s profile of the group, “It has been difficult to write a book about Damanhur because by the time the book is finished, Damanhur is different.” This constant push to improve and expand is electrifying and has kept the majority of members from losing direction or devolving into infighting. The community may be a little hubristic in thinking that they are building a new civilization that will allow humankind to be renewed and saved from its current trajectory, but they are undoubtedly producing much value in the process.

For those wanting to know more, Damanhur maintains an active presence on Instagram, Facebook, and other socials, and even has an extensive gift shop on its website where you can purchase a €437 plant communication device or a more affordable drinking bottle featuring the community logo. Surely there is some form of light business going on with all of this, but for an entity that has many of the characteristics of a cult, it seems rather benign. I’ll take a Damanhur over a Heaven’s Gate or a Peoples Temple any day.