Is Italy Heading Toward Water Disputes?

Together with new climate risks and socio-economic issues, water disputes are on the rise in Italy. Solving the problem is in the hands of a sustainable agenda. 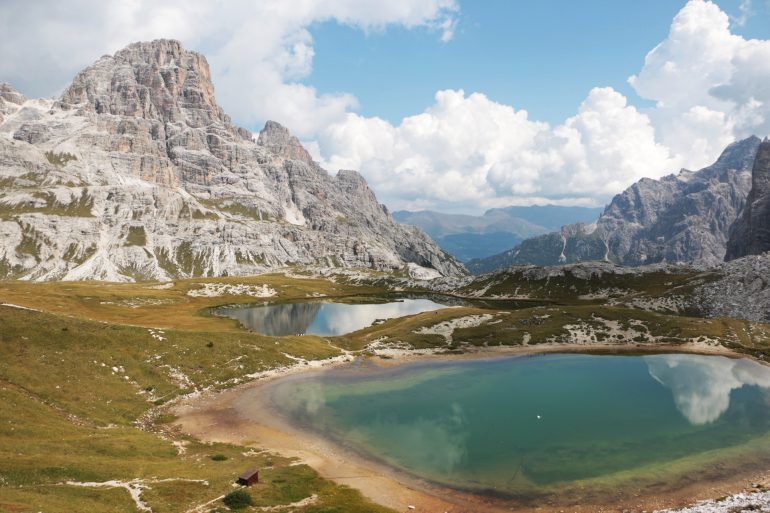 The Tre Cime di Lavaredo mountain peaks at the border of South Tyrol and the province of Belluno in the Veneto region. Photo by Alessandro Valenzano on Unsplash.

Water is the most precious element on Earth. In some sense, it is the bedrock of life, on which humans, and non-humans, rely for surviving on this planet. Water is indeed a ‘universal solvent’ that helps cells to use and consume oxygen and nutrients. Water also helps to create solid structures (think about a fresh and dehydrated fruit) and generates important chemical reactions. Without water, there is no life.

Fortunately for us, Earth is mostly made of this unique life-ordering mixture of hydrogen and oxygen. Nevertheless, if we take a closer look at the great blue pearl that is our planet, an oasis of life floating in the darkness of the cosmos, we see that the water is not available directly to us. In fact, of that great mass of water of which the Earth is made, we can count only on 3.5%, the share of unsalted water.

In fact, the majority of water on our planet is indeed ‘contaminated’ by salt, which makes it unsuitable for direct consumption for the majority of earthly beings. Luckily, nature has developed an intricate and perfect flow to allow some of that salt water to flow back to the land in a sweetened form. A perfect mechanism made of seemingly fluffy clouds that are in reality intangible and full of water.

We are taught at school that to ensure the balance of life, the water cycle connects the oceans with the atmosphere and land. Water evaporates from oceans, rivers, and seas, and transpires from plants to condensate in the sky. Then through precipitation freshwater is released on the surface of the mainland.

As we said, this cycle is perfect, or at least it is supposed to be like that. Due to the most recent and violent change in climate stability—we all know the causes—the rainfall gear seems to have jammed or at least changed its rhythm. The ticking of the rains acquired a different timing, the currents of the rivers no longer resonate with the same force during their descent from the glaciers, down the valleys, and into the sea.

Farmers know this very well. They know how precipitation has been changing in the last decades. They are the first observer of Earth, in some cases real protectors. Nowadays, they face more often the risks of prolonged dry seasons followed by heavy rainfall. They know how endangered their crops are, not to mention people. Droughts destabilize agricultural production by taking away its primary and fundamental resources. In addition to this, the soil weakens and loses its ability to absorb rainfall. When downpours arrive, the water simply flows over the surface, generating floods.

Especially in the north of Italy, the urgency of the disrupted water cycle is more relevant than ever. In Veneto, a region that is no stranger to extreme weather events, a prolonged period of drought has been putting at great risk the production of the many Venetian agricultural excellencies. Water tables are at an all-time low, and precipitations in 2022 have been half the expected. A situation that is made even worse by the fact that there is no more snow, and what little snow has fallen during winter, has already melted due to the anomalous temperatures in February and March.

Furthermore, the water crisis in the north-Italian region is particularly affected by two major issues, including the loss of glaciers, and the ‘saline wedge’. The latter is the phenomenon whereby saline water at the estuary flows up the tributaries and into the hinterland due to the density difference between salted and unsalted water. Veneto is indeed subject to this phenomenon due to its geographical position and morphological characteristics, especially if we consider the proximity of some crops to the coastline. Saline wedges cause seawater to infiltrate the interland due to insufficient freshwater at the outflow points, by putting at risk the cultures of farmers and the conditions of the soil.

Now, to cope with agricultural production Veneto is asking for help from neighboring regions: Trento and Bolzano. Unfortunately, responding to the Venetian mayday is not as straightforward.

While the president of Veneto, Luca Zaia, asks for the opening of the South Tyrolean and Trentino basins, and of an over regional management of water resources, the respondents are concerned with the potential loss in terms of energy production that hydropower plants might suffer. A situation that is also complicated by rigid supply contracts and penalty clauses for failure to meet specified delivery levels. Especially in insecure times such as the ones characterized by the Ukrainian conflict, the trade-off between food and energy production is not an easy matter to be solved with words and politicking.

In the meantime, on May 3, 2022, the governor of Veneto declared a state of emergency. The hope is to resonate inside the chambers of Chigi Palace — the seat of Council of Ministers and the official residence of the Prime Minister — in the hope of mobilizing funds and aid to deal with potential losses and new investments.

Veneto, like many other Italian and European regions, will face many more of these events in the years to come. Therefore, there has to be a holistic, methodical, and scientific response that addresses the underlying problem rather than treating its effects. For example, new investment in precision agriculture, or in the water supply network, but also simplifying and softening energy supply contracts, properly addressing the trade-off between water and energy in a long period and life-cycle perspective, as well financial support to cover climate-related risks along the entire production chain.

It should be remembered that Italy still shows significant shortcomings in terms of the efficiency of its water system. In 2015, in fact, water losses during transport amounted to about 3.2 billion cubic meters (ISTAT 2015 data), which is equivalent to about 144 liters per inhabitant per day. Unacceptable numbers at a time when sustainable socio-economic development is being promoted.

The hope is that a solution will be found between Trentino, Bolzano, and Veneto for water-sharing that will favor and protect both parties. Besides, regional or national individualism cannot reconcile with sustainable development and a serious confrontation with climate changes: these do not look at nationality or place of birth. In the near future, water shortages are likely to become more frequent and violent. It’s time to address the problem appropriately and to put up a united front against climate change.