Italy has been struggling with stalking for quite some time, but a new form of it is slowly taking over. 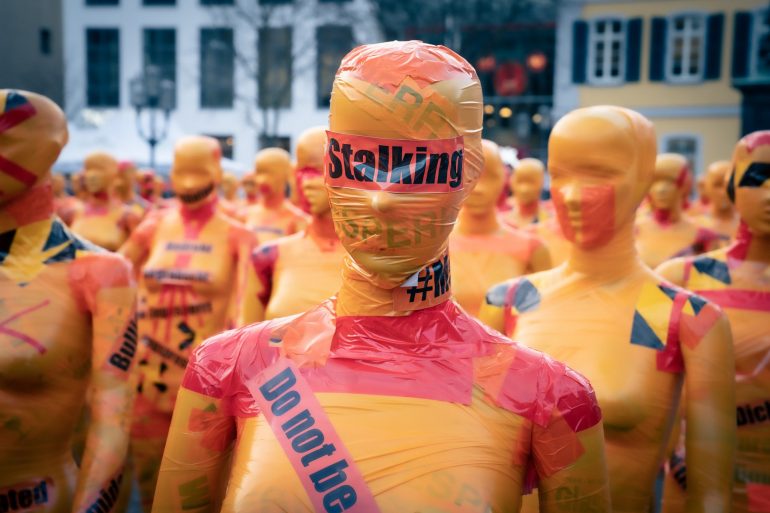 This photo was taken in Bonn, displaying the work of an artist for the international day against domestic violence. Photo: Mika Baumeister on Unsplash.

Stalking is a form of harassment carrying a large criminal offense. It is unbelievably common, with 6.6 million people stalked nationwide in the United States per year. Of the enormous amount of people stalked per year, it has been estimated that 25% of these stalkers use technology as the main form of information. This cyberstalking has become extremely popular, and occurrences continue to increase per day. Of these occurrences, most commonly the victim knows the stalker, and more often than not they are involved romantically. In fact, about 76% of victims are women stalked by their current or past romantic partners.

Due to the increasing popularity of technology, with various location services available to anyone and social media pages posting the day-to-day happenings of strangers’ lives, it is important to consider the dangers of these services, and how quickly people’s lives can be hacked into.

When logging on to Facebook, or searching for a quick picture on Instagram, it often escapes one’s mind how invasive and personal some accounts can be, offering the inside scoop to every single happening in the person’s life

Today, the world revolves around technology, and because of this, there have been countless cyberstalking instances. Many of these stalkers work through various platforms, all intended to illegally collect the information of another. However, the one most globally known and used worldwide is that of Stalkerware.

Stalkerware is the name of an app used specifically for cyberstalking. It is a monitoring service that, for only around 10 euros, allows the buyer to view and access all information found within the cellular device of another person, such as phone calls, text messages, pictures, browser history, etc. Like many stalking instances, it is widely used between spouses, and has received large criticism and backlash for its relation to stalkers and abusers.

Italy is the second leading country in Europe that has been exposed to the dangers of stalkerware. In a 2021 report given and edited by reporter Kaspersky, the details show the rise in cases over the recent years, stating that, out of 32,694 cases worldwide, 611 cases alone were in Italy. Interestingly enough, 26% of the entire Italian population agrees that it is reasonable to control one’s partner under specific and personal circumstances.

So why does Italy specifically struggle with this issue? It wasn’t until 2009, one of the last in Europe, that Italy recognized stalking as a criminal offense, and implemented legal consequences for it. There are many factors that tie into why Italy struggles with this problem, such as cultural misconceptions, beliefs, and an overall uncertainty and vagueness surrounding the public’s view of stalking itself.

How does Italy compare to Europe and to the world?

These numbers are the second largest in Europe, falling behind only to Germany. When surveyed, Italians reported an overall 11% confirmation of being victims of cyberstalking, compared to a 24% international percentage.

Being the second most exposed country in Europe, Italy falls in 11th place when compared globally. The leading country in exposure to cyberstalking is Russia, with 7,541 cases reported in 2021. The United States, falling in third place for cyberstalking globally, reported 2,319 cases within the same year.

What can be done?

For Italy, it is interesting to see that stalking is a topic that greatly needs further attention. It is not a common topic in Italy, and therefore, there is not much knowledge known about it. These factors tie into why exactly Italy is struggling with this problem today. In fact, in a similar experiment given by the University of Nebraska, Italian University students were asked a series of questions regarding stalking. Interestingly enough, the students tended to agree primarily with misconceptions regarding stalking, and only until recently did they show understanding in the roots of the issue. In order to fully conquer this issue, Italy needs to treat stalking as a serious problem, teaching the dangers of it in schools and helping people take safety precautions in order to protect the society more.

Like the rest of the world, Italy can take note in its efforts against cyberstalking by implementing a series of crucial measures to take. Most importantly, the passcode feature on a smartphone is one of the most important things that one can have. Millions of people tend to leave their phones unlocked which, though may save time, puts the entirety of their contacts, photos, notes, files, text messages, and many more at risk of being leaked. The simple implication of a passcode could save your information.

In the frightening discovery of a stalker, the victim may react emotionally and attempt to figure out the person’s identity themselves. In this situation, it is best to bring matters into the hands of the police, who in many different countries, have implemented a strong structural foundation in the attempt to control cyberstalking.