Civita di Bagnoregio: The City In The Sky

Time traveling and romanticizing different eras aside, everyone should bookmark Civita di Bagnoregio in their must-see towns in Italy. 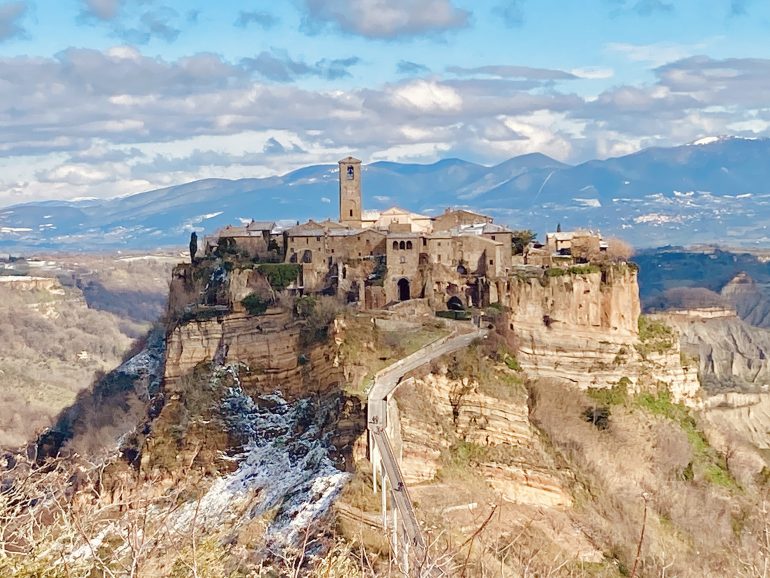 Well, not that I can actually see any of your hands, but I would assume some of you have them up — or at least thought about it. And why wouldn’t you? The idea of traveling back in time appeals to so many of us. In fact, if I could have one superpower, it would be the ability to travel through time, but since I’m only human, I have to rely on period piece films and time traveling movies to fill this void in my life. I gladly suspend my beliefs and all sense of logic as I willingly go on the journey the story takes me — whether that means I believe that a magic door or a flying car allow people to go back and forth between centuries, I’m onboard.

Aside from fiction and fantasies, ancient cities are the closest thing that provide us with the slightest notion of what the past may have felt like. It’s essentially the nearest thing that we have to real life time travel, and it’s probably why I love Italy as much as I do. We can literally walk on the same roads that were built thousands of years ago. We’re given a taste of the past, and Italy has no shortage when it comes to ancient cities. Take Rome for instance. It’s one big outdoor museum of the past world. Matera in the Basilicata region feels biblical. San Gimignano in Tuscany is straight up medieval times.

And then there’s Civita di Bagneregio just one hour north of Rome, and it’s one of those places that stops you in your tracks. You walk around a corner, and bam! You’re hit with the image of an ancient village that literally looks perched on top of a crumbling mountain. And it looks perched on top of a crumbling mountain because it is. The image truly takes your breath away and invites you on a journey to another time. It’s an enchanting show-stopper, and to put it lightly, it’s dying. And it’s known around Italy as the dying town, ‘la città che muore’. Despite the constant erosion, there are a lot of people working to keep Civita di Bagnoregio intact. These people are fully aware of how many tourists visit the village and just how special the place is. They don’t want to see it going anywhere any time soon, so a lot of funding goes into repairing this dying city.

Civita di Bagneregio was founded over two thousand years ago by the Etruscans. The Etruscans are believed to have migrated from the East Mediterranean and Asia Minor area in 900 BC, but you don’t gather that from any of the architecture. Most of what you see in Civita was built during the Middle Ages. The church structure and bell tower in the center of the town were likely built around 600 AD, and the rest of the buildings were probably constructed around 1100 AD.

But things didn’t start to go south — literally crumble to the ground — until 1695, after an earthquake hit. This started the decline. Following the quake, there were many landslides, each that trimmed more and more land off the city’s square footage. These natural disasters left it vulnerable and virtually abandoned. Civita loses about seven centimeters of land each year. The earth collapses into the canyon below, and despite the amount of money that goes into keeping it alive, the city is still on the 100 most endangered sites lists. The yearly erosion plus the fact that the town is basically an island connected to the world by a footbridge keeps the population at a minimum.

I’ve read that the city has seven residents, but I’ve also read that eleven and maybe even sixteen people call this place home. To be honest, I don’t see how it’s more than a vacation home to most of the residents because to reach the village you have to cross the sole footbridge that’s about 366 meters, inclined. That’s about a fifteen minute walk. Can you imagine leaving the house keys in the car? Round trip that’s at least thirty minutes. And don’t even get me started on furniture. I don’t understand how one moves anything there. And while there may not be many year-round locals, there’s no shortage of tourists. The tourists arrive each and every day by the busloads. In 2019, one million visitors stopped by to enjoy this ancient city in the sky.

Civita is known as one of the most beautiful towns in Italy, and it really does have that picture-perfect postcard image inside and out. There are no vehicles driven within the city walls; there’s not even a grocery store, hardware store or any offices that I could find. However, sprinkled about are quaint restaurants, enotecas, museums, souvenir shops, a number of charm-filled B&Bs, and even a little garden on the opposite end of the entrance. Sauntering through the town and passing the souvenir shops each highlighting different paintings and photographs of the city, it was easy to want to mentally travel inside the photo, despite already being in the city at that very moment.

Oftentimes, when we mentally travel to other lands or time periods, we think we would be happier. Sometimes when we see a photograph of a beautiful memory, we may want to be inside the picture again — to go back to that day or that moment in time where things looked happier or maybe easier (from a 2D perspective). Now, I am literally inside a picture, a perfect moment, and I’m still admiring a photo of it instead of real life. It’s the same sentiment of wishing you knew you were in the good ole days before it’s too late. Maybe if I could just remember this then I wouldn’t stroll through streets of an ancient village and long to live in another era. Instead, I’d want to live in the moment and appreciate what the city is now and whom I’m experiencing it with. But honestly, who am I kidding? I wouldn’t last a day in the ancient world. Despite all the lounging time and leisure-wear togas, one whiff of the streets, and I would surely be a goner. I can hardly stand the smell of today’s public restrooms. Can you imagine the ancient roads? They were one big toilet. The smell alone would be the death of me.

Time traveling and romanticizing different eras aside, everyone should bookmark Civita di Bagnoregio in their must-see towns in Italy. I’ve now been to Civita three times, and while maybe I don’t necessarily see anything new (it’s a small village), I feel something new each time. And I always have to make a special stop at Antico Forno. I’m not usually a creature of habit — I mean, I am. Who am I kidding? I’ve worn the same perfume for twenty years. However, I still like to try new places, but here in Civita, I really just want to eat in this rustic cave filled with antique treasures, including a 1500 year-old original oil press that serves as a master centerpiece for the restaurant. The menu at Antico Forno is quite small, and mainly bruschetta but — authentic bruschetta — which I guess is confusing to people who write reviews on Tripadvisor because the place only has 2 stars and really funny slash harsh reviews, as it seems people get pretty riled up about paying for toast — which guys, bruschetta is essentially toast. You can add delicious toppings, but at the end of the day, it’s toast. I really can’t recommend this spot more when you visit this magical mountaintop.

All in all, if you need to relax after pounding the pavement in Rome, I suggest you buy a journal or bring your laptop and spend a couple of nights at a B&B and reflect. Write. Meditate on whatever is happening or not happening in that noggin’ of yours and travel back to present day and enjoy the inspiration from the little city in the sky. Take a photograph and bottle up the memories so one day when you need reminding you can open the bottle and smile about the good ole days. Or wait, didn’t I say earlier that the good ole days are always now. Okay, well. I guess it’s all relative. What do I know? Just go to the city. Eat some toast. Donate to the cause of helping a two thousand plus year-old city not die.