What’s The Future Of The Frecce Tricolori?

Frecce Tricolori are an example of Italian precision, pride, and professionalism, but new priorities may make them a thing of the past. 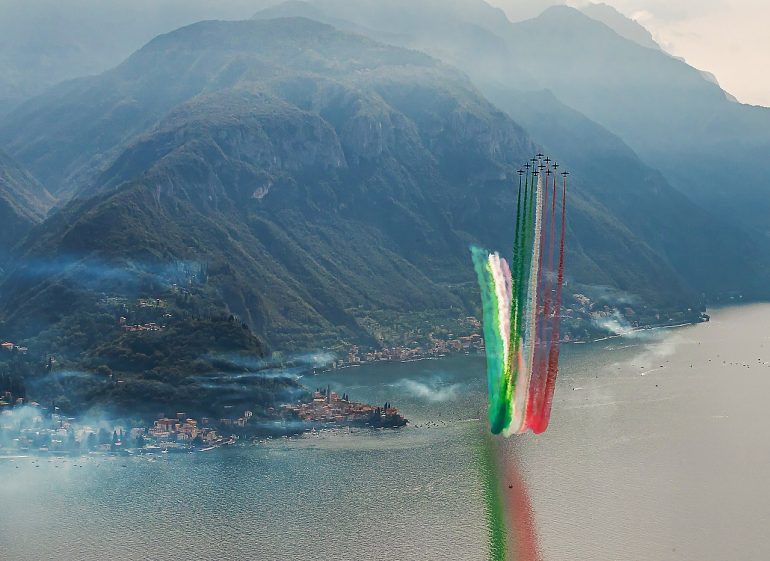 Le Frecce Tricolori translates as the Tricolor Arrows, but I find the name much more appealing in the original. Involving ten aircraft, nine in close formation plus a soloist, the Italian group is the world’s largest and most famous aerobatics patrol, with a typical flight demonstration including about twenty maneuvers in an approximately thirty-minute fly-past. That’s thirty minutes in which the spectators, engrossed in the spectacular show, gasp and squeeze their eyes tight shut, unable to keep at bay the imaginary — and sometimes, tragically, not so imaginary — impact of colliding planes.

The aerobatic demonstration team of the Italian Air Force is based at the Rivolto Military Air Base in the province of Udine in northeast Italy. Yet changing priorities and the ever-present threat of budget cuts may be putting the future of this famed formation at risk.

How it all began

The Frecce Tricolori is one of the country’s most-loved national symbols. But its role in Italian official life was born from a long history of aircraft acrobatics, which have fascinated the Italian public since the first public performance of the first aerobatic team on July 12, 1928 at Rome’s Littorio airport.

Indeed, the Frecce Tricolori were far from the first team in Italy. After World War II, teams were created with exotic names like Cavallini Rampanti (Prancing Horses) and Tigri Bianche (White Tigers). The Cavallini Rampanti team was created in 1950, disbanded in 1952, and re-established again under the same name in 1956. Alternatively, Tigri Bianche was the first Italian team to visit both Canada and the USA.

There were many more teams over the years, from the Guizzo team to the Getti Tonanti (Thunder Jets), the Diavoli Rossi (Red Devils), and the Lanceri Neri (Black Lancers). But towards the end of 1960 it was decided to end the shifting competitiveness between the various groupings and to found a single department whose specific purpose was to form the national aerobatic team, selecting the best pilots from the various air force departments who would represent Italy at both national and international air shows. Major Mario Squarcina, leader of the Diavoli Rossi, was commissioned by the Italian Air Force to establish the Pattuglia Acrobatica Nazionale (National Aerobatic Patrol).

From this moment on, the 313th National Aerobatic Training Group was founded on March 1, 1961. And in 1963 the possibility of using colored fumes was perfected and Italy’s green, white, and red plumes soon began to complete the spectacular fly-pasts.

In a recent survey commissioned by the Italian Defence Ministry, the Frecce Tricolori emerged as Italy’s most familiar non-official national symbol, recognized by almost 100% of the population. But they display remarkable quality even for an aircraft acrobatic team. In 2005, the Frecce won the award for best exhibition at the Royal International Air Tattoo at Fairfield, England. And, in April 2014, they were the first non-Russian unit to receive the Russian Silver Medal for Aeronautical Merit.

Of course, technical prowess cannot completely rule out accidents, and in this sport the slightest mistake can have catastrophic consequences. For the Frecce, almost twenty aerobatic-related deaths have occurred since 1961, mostly in training but also during air shows.

But the worst accident in the aerobatic team’s history occurred on August 28, 1988 at the Ramstein airbase in West Germany. During a ‘heart-shaped’ maneuver at the top of a loop, the mass formation of ten airplanes separated into three smaller formations: one with five planes, another with four planes, and the solo pilot. The inaccurate execution by the solo pilot caused a collision and a catastrophic outcome. One plane from the team collided with a helicopter on the ground killing its pilot who was in the cockpit. Meanwhile, the solo aircraft hit the ground in front of the crowd killing 70 spectators and injuring about 600 many of whom would later die from their injuries. Three of the team’s pilots died. The other seven aircraft diverted to the Sembach airbase and landed safely. This horrific crash lead to a revision of flying norms and staff and spectator safety on the ground.

In the previously cited eight-page analysis on the perception of the Frecce in Difesa.it, the official journal of the Italian Defence Ministry, a 2018 publication of a study by Jan Slangen concludes that, nowadays, the Frecce Tricolori is acknowledged as one of the world’s premier aerobatic teams able to inspire national pride and professionalism by strengthening a culture of excellence and service to the country.

Yet that might not be enough to keep this long-standing institution safe. Indeed, thanks to ongoing reforms of the Italian Military Forces, questions remain about the future of this team and about the investments required to keep it operational. In the context of contracting economic resources, a careful and continuous evaluation of the military as a whole is required, with structures adapting to present challenges and future global trends. As a result, the choice to maintain activities that are not immediately functional to the core mission of ‘defence’ is not so automatic.

Do the Frecce Tricolori represent an effective communication tool that can add to the benefit of the entire area of the Italian Armed Forces? When it comes to reputation, the Italian population can be generally said to hold a high appreciation of the Italian Air Force which, for many people, represents moral integrity. In view of this, studies reveal that the Frecce Tricolori Italian Aerobatic Team is appreciated, yet their remarkable potential is perhaps not always fully recognized. Indeed, they could be better used as spokespeople of the many missions of the Italian Defence both within the country and abroad.

Of course, there is still space for improvement and a need to adapt to present-day realities. The public and private sectors recognize the great potential of the Frecce Tricolori as a strategic communication instrument, with the eventual use of brand-name commercial partnerships to facilitate cost effectiveness being considered by the Ministry.

Can or should the Frecce survive?

There are over twenty aerobatic displays programmed all over Italy for the remainder of 2022 and the popularity of the Frecce Tricolori shows no sign of letting up. But it’s not clear for how long that will last. While the Frecce are thrilling to watch, they may soon be consigned to the past.

In fact, right now some of the biggest concerns among Italians regard the environment, the cost of living, and public spending, and these factors may well have an impact on the perception of the formation. Indeed, in our austere world, sentiment and tradition may soon have to be replaced by practicalities like the reduction of unnecessary flying in both the commercial and the military sectors which have already forecast huge increases in military spending. Furthermore, some organizations are considering eliminating the fly-past from traditional international exhibitions — although for this year at least, giants like Formula 1 have ‘saved’ the September Italian Grand Prix fly-past at Imola and Monza.

Will the Frecce Tricolori survive? It’s a tough call to make — and one that pitches cost and environmental considerations against questions of skill, finesse, and pride. Whatever happens, it’s those virtues for which the team will be remembered.