The journey of baccalà from the seas of Norway to Italian plates is one that involved shipwrecks, floating barrels, and the Catholic Church. 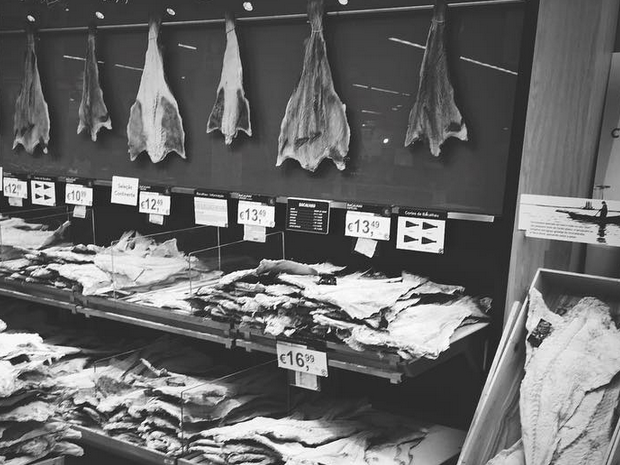 Why did dried cod become such a major part of Italian cuisine?

No one ever said preparing baccalà was easy. The average recipe requires two to three days of preparation, and that is before the actual cooking begins! Despite the effort required, baccalà became a consumer sensation when it was introduced to Venice close to 590 years ago. It all began when a merchant named Pietro Querini returned from Norway in 1432 with packs laden with dehydrated cod. Captain Querini had originally been bound for Bruges when his ship wrecked in a powerful storm and the crew were forced into lifeboats.

They drifted for weeks, dying of starvation or illness by the dozens until 11 survivors including Querini were rescued by fisherman near Røst off the west coast of Norway. Their main source of sustenance was what the locals called stockfisk, preserved through air drying but brought back to culinary life with a delicious concoction of butter and herbs. Perhaps it was his close encounter with death, but Querini was impressed enough with the fish and its preparation to cause him to become the first Italian importer of Norwegian cod. Querini may have been the catalyst for a trade that linked two radically different worlds, but what caused baccalà to become so ingrained in Italian, and more specifically Venetian cooking, involved social classes, economic trends, and naturally, the Catholic Church.

Before we get ahead of ourselves, it is important to clarify the word ‘baccalà’, as it has various meanings depending on where you are in Italy. The term is believed to derive from Portuguese, as these fishermen worked the waters of the Atlantic and North Sea for generations, becoming very familiar with the best methods of catching and transporting cod. They called it ‘bacalhau’, which can be etymologically sourced back to the Latin ‘baculus’, or ‘bastum’, both related to staffs or sticks. Clearly this term was chosen due to how cod was preserved in Scandinavia by being set up on wooden racks to dry in bitterly cold winds. While in regions like Veneto and Friuli Venezia Giulia the word is synonymous with stockfish, or the dried version of cod, across most of the rest of Italy baccalà is considered to be salted cod. However it was preserved, the demersal fish initially made its debut on the plates of the less influential members of Italian society.

Due to its low cost and nutritional value, baccalà was considered to be ideal for the peasant classes, and their masters put in large orders with the local fish brokers. The fish was transported into Northern Italy via zattere, or wooden rafts that were poled down the river, bringing barrels of provisions to hungry mouths throughout Veneto and beyond. As Professor Galliano Rosset recounts in his 2012 book I lavori e le stagioni nel Veneto di inizio ‘900 (Cultura e tradizioni popolari venete), the rafts were so critical to the transport and distribution of goods that they could be considered “the Amazon of their time.” The contadini began using the hearths within the residences of their landlords to prepare baccalà as it required extensive cooking, and over time the aristocracy came into contact with the recipe as it filtered upwards into new palates.

It was during the mid-1500s that baccalà entered the mainstream, if you will. While the history remains disputed, there is compelling evidence to suggest that the Council of Trent significantly boosted the consumption of codfish in Italy. During the two decades that the Council sought to codify Catholic doctrine and confront the growing challenge of Protestantism, they mulled over everything from baptism to “the choice of meats,” and this is where baccalà comes in.

By the end of the Council, the church fathers established a calendar of fasting and abstinence, which meant that traditional meats such as beef and pork were to be avoided on Fridays as well as certain holidays. Seeing that this totaled around 150 days per year, a solution was desperately needed for the hungry faithful. Into the gap stepped — or flopped — imported stockfisk. According to Galliano Rosset, the monks at Rovereto in the Trentino region were closely involved in the lobbying effort as the zattere traveled right by their monastery on the Adige River and the brothers had developed an acclaimed baccalà recipe. Others point towards Olaus Magnus, a Swedish ecclesiastic who was present at the Council of Trent from 1545 to 1549, and who wrote the authoritative tome Historia de Gentibus Septentrionalibus. As a Scandinavian, Magnus had a vested interest in expanding the codfish market, and devoted a significant section of his magnum opus to a history of the trade, recommended fishing techniques, and the best ways of conserving the catch. His influence on raising the profile of cod in Italy and other areas of Europe cannot be underestimated.

Over time, the fish and its preparation grew to be so important to the Vicentini that the Venerable Confraternita del Baccalà alla Vicentina was established in Sandrigo in 1987. The organization was inaugurated to preserve traditions surrounding the esteemed catch, which sustained entire industries and innumerable appetites for generations. As they say on their website, the society is “not just dedicated to festive meetings, but also seeks to defend good local cuisine.” The group features an authoritative recipe for baccalà alla Vicentina, which is a result of extensive research among the restaurants and trattorie of the region. Indeed, if one is on the hunt for the gastronomic and cultural origins of baccalà, there is no better starting point than here.

Italy remains the largest consumer of codfish outside of Norway, importing a few thousand tons each year. 80% of the codfish is still sourced from near the area where Pietro Querini first encountered them back in the 1430s, which is a remarkable testament to the longevity of the Norwegian-Italian partnership. While baccalà alla vicentina might not be the dish that Italy is best known for abroad, it is the only recipe to be given the honor of an official postage stamp by the Poste Italiane. Released in March 2017, it depicts dried salt cod next to an appetizing bowl of baccalà.

Preparing dried codfish will never be as straightforward as simple pesto pasta or margherita pizza, but it is a shining example of the Bel Paese’s multilayered culinary history, which has links to regions far removed from Venice and Northern Italy.