Neapolitan Coffee (Once in Naples)

There is no coffee in the world as vivacious and as filled with character as a Neapolitan coffee. It is alive as the city, boisterous as the bartender who has lost all hope but not his capacity for happiness. 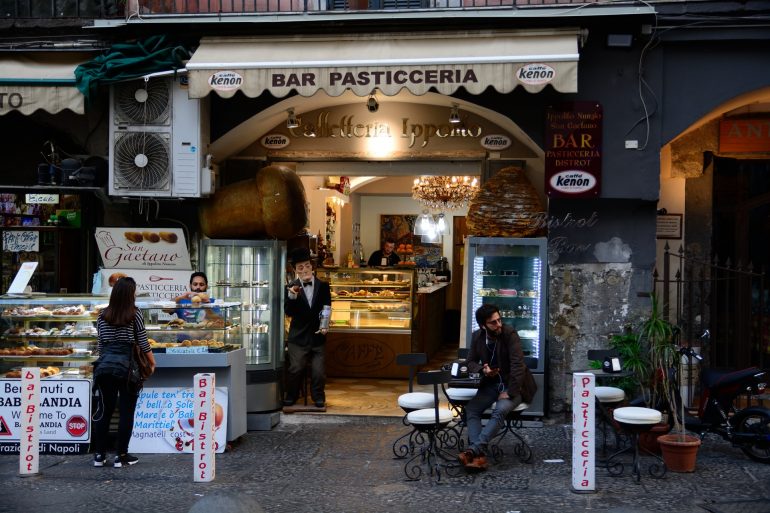 A cafè in central Naples. Photo: Bertrand Borie on Unsplash.

After queuing for more than half an hour in front of a well-known trattoria we were finally accommodated and had a sumptuous Neapolitan lunch. A meal which involved the constant hurrying to and fro of red-shirted waiters, shouting god knows what incomprehensible words to god knows whom and an out-of-the-blue appearance of an unlikely singer which compounded the already buoyant scene.

Leaving the trattoria, R and I were at a loss to account for all the commotion that happened. We were baffled whether we had been in a theatre or a local restaurant or both. For Neapolitans are a naturally theatrical people. They are born performers, prodigal with words and gestures. Each quarter, street, square, any public space is charged with incessant undercurrent of jangling theatricalities. When Neapolitans speak they exclaim, rather a kind of speechifying with a rhythm of a horse whip shot through with a deep-toned sweetness. One cannot not be enamored by a sentimental Neapolitan love song.

As we lost our way through the narrow steep streets, constantly on alert for reckless motorists who had no qualms in running you over, we amused ourselves with the endless rows of mural paintings and graffiti which decorated this part of the city. One street was devoted to the great comic actor Totò. Portraits of his iconic characters and lines from his unforgettable films embellished the walls of apartment buildings. Another street to the most loved football player in the history of Neapolitan football, the Argentine Diego Maradona. There was no street, perhaps no corner, without an image of Maradona who, alongside the Virgin, was more loved than Christ in this city.

Murals of great personalities abound the streets of Naples. Personalities who showed the world Naples’ prodigious talents, who gave this land its modern cultural dignity and pride. Their images were as present as the canopy of clotheslines that held separate balconies together. Those swaying clotheslines like sails every time you look up the radiant sky. They were part of the diverting details of the city, giving the outsiders a sense of commonplaceness and homeliness.

Down to the rolling Via Toledo the main avenue of the city where the incessant hoot and grunt of the traffic formed the constant background of the human drama reminded me of my native land Manila. The swell of chaff and noise, the cluster of shops and the endless human crowd, the insufferable desire to make a living. The whole scene had an old-fashioned weariness, a general restless dread of the fact that luck is volatile, that made its busy appearance an enduring tragedy.

It was the first week of spring. Spring in Naples was neither soft nor kind but disconcertingly virile and impenetrably ironic like the men and women of this city who will not take shit from anybody. The sun was like a mother — present, generous, always working, admonishing. The vivacity of the young was embodied in their surprising frankness, ostentation, petty crimes, and love of music. They seemed to sing all the time. There was music everywhere we went. There was no specific time to eat. Any hour of the day was an invitation to relish the unique array of street food lining the streets. Neapolitan street food is graciously cheap and is a gift to the world. They make food and make love with equal passion and intensity. One cannot get an inside view of Naples without eating like a real Neapolitan. And the mouth-watering smell of frying which was everywhere haunted you like a memory of happiness sunk deep in the mind.

Returning to Via Tribunale to the street of our brief residence for the inevitable calling of the palate and soul for a cup of Neapolitan coffee. As there are many reasons to visit Naples there is but one substantially precious that seems to swamp the rest: coffee. There is no coffee in the world as vivacious and as filled with character as a Neapolitan coffee. It is alive as the city, boisterous as the bartender who has lost all hope but not his capacity for happiness.

Neapolitan coffee is thick like an old wine, dark like the inside of the church. It awakes you to the sinful pleasures of this life. An entire book has to be written as to why Neapolitan coffee is what it is. Not only is the taste distinct but the spirit and punch are mysteriously unique to this place. Indeed, my first cup of Neapolitan coffee gave me an excruciating sense of being a latecomer in this world and felt, like Van Gogh and Rilke before me, that “everything is yet to be done.” Everything.

Across the street of our Bnb was a charming little café; that improvised, working-class type of café where the owner didn’t even bother to put up a sign. Inside there was a complete absence of pomposity and décor; it was like the kitchen of a normal shabby household. Of all the cafés in this street this one had the most savory home-made cakes at the most humble price. To accompany my coffee I ordered a slice of black cherry cake (torta all’amarena). A slice of cake in Naples is enough to satisfy two.

While the barista was preparing our orders a man in his early fifties, an affectionate customer at the café chimed smilingly: “That cake’s delicious.” I smiled back, startled by his affirmation. Then he went on, typical of Neapolitans love of random storytelling: “When I was a boy we would go to the sea during summer and there was this vendor who sold cakes and pastries at the beach and every time my mother would buy us that cake you just ordered. It was most delicious cake I’ve had in my life from that vendor. We ate the cake still fresh and hot from the oven. Wonderful memories.” He had a soft and radiant voice. He continued: “You should enjoy yourselves while you’re young,” his gaze bounced back between me and R. “Take whatever life gives you, because life is a curve,” with his index finger he drew in the air a C shape turned upside down like a hill, “you begin from the bottom, you then reach the top, and then go back down to the bottom.” Just like life in this city, I thought as he left us to enjoy our coffee and cake.

This city need not a pandemic and another war to claim for itself the little victories and the tiny joys of just being able to proceed in the day. The continual hardships each day brings beget a kind of attitude to life — cunningness mixed with gentleness renders the possibility of survival. Hearing those words from a stranger who lives in a place that has known too much violence and suffering but also an abundance of kindness and generosity and beauty was more than theatrical. It was prophetic. That the people of Naples can withstand whatever catastrophe that befalls them testifies not to an innate strength but simply because they expect nothing from life. They take whatever life gives them. Just as we took this coffee and cake in a corner of a bustling street.