The Venice Biennale 2022 Is Not To Be Missed

Things are starting to shake up in Venice: diversity, equality, and a welcome fresh take on an institution that had gathered some dust. 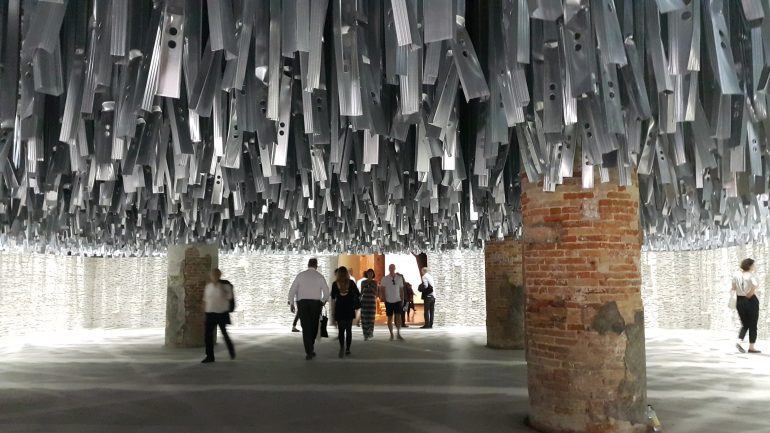 Some have called it the Olympics of the art world for how it offers visual arts, architecture, dance, theater, and a unique experience to witness some of the most cutting edge artists of our time. For over 120 years, La Biennale di Venezia has been one of the most prestigious cultural institutions in the world. Today, things are starting to shake up: diversity, equality, and a welcome fresh take on an institution that had also gathered some dust.

This 59th edition will be titled The Milk of Dreams, named after a book by Leonora Carrington, the British-Mexican artist who is the inspiration behind this year’s event. “A world where everyone can change, be transformed, become something or someone else; a world set free, brimming with possibilities,” Cecilia Alemani writes in her curator’s statement.

After a pandemic and other reasons to be anxious brought by this new year, it seems that optimism — or at least change for the best — is the key word of this year. Let’s rediscover the world we live in, and perhaps the way we think as a global community. “The looming threat of environmental disaster remind us every day that as mortal bodies, we are neither invincible nor self-sufficient, but rather part of a symbiotic web of interdependencies that bind us to each other, to other species, and to the planet as a whole,” Alemani adds. Much like in the original book (a collection of odd short stories for children), this year’s Biennale encourages us to add our dreams to reality and question the stories we have been telling ourselves for a while.

The force behind it all

Cecilia Alemani is an Italian curator who works on the international stage. Her curriculum is impressive, including other events such as Art Basel and the New York Frieze Art Fair. Today, she is the first woman to hold the prestigious position, but this is not her first rodeo at the Venice Biennale. In 2017, she curated the Italian Pavilion.

The Milk of Dreams includes over 200 artists from 58 countries. We also have a great majority of newcomers. Another first this year: cis and trans women and gender non-conforming or non binary artists take center stage, and are now the majority. Alemani confirms that this decision was fluid and not based on virtue signalling, saying “I’ve always worked with lots of women artists. When I wanted to invite a man, I invited him,” she shared in an interview. The need to justify herself against those who see this as virtue signalling is the very proof that progressive initiatives such as this one also need to be corrective — that is reshaping the narrative placed in the hands of (male) critics, curators, and art professionals. “By choosing almost exclusively women, Alemani has paid a severe price in terms of quality, a cost obvious too in the contrast with many superb exhibitions by male artists across town.” This is what Financial Times critic Jackie Wullschläger wrote in his review of the Biennale.

However, the topic of gender is just one of the issues that the curator and her team want to address. The overall goal is to finally shed the light on artists who have been prolific, but have not received their spotlight yet due to systematic racism of the art world or other societal constraints. The Biennale is also taking a stand against the Russian federation’s government and its involvement with the invasion and war in Ukraine, and the Russian Pavilion will not open its doors. Nearby, the curators of the Ukrainian Pavilion and their artists have mounted installations that reflect the on-going situation in Ukraine — you can see a tower of sandbags in the middle of the piazza, echoing the protective measures to preserve Ukrainian cultural monuments.

The notion of sovereignty is pushed further: it is the first time that the indigenous Sámi people (a diaspora community living off the Arctic Circle) will present their own pavilion. Finland, Norway and Sweden — the countries where the Sámi people reside and the nations they view as their colonizers — all usually share a space at the Biennale, otherwise known as the Nordic Pavilion. A big first for this edition as the Pavilion has been retitled with the name of the community. A symbolic gesture and a desire to rethink the notion of identity and give room for justice and recognition.

What you should not miss

Head down to the Tibetan Pavilion, where Nepal will participate in this year’s edition for the first time. The work of multimedia artist Tsherin Sherpa (curated by Sheelasha Rajbhandari and Hit Man Gurung) in an inaugural exhibition co-commission by Nepal’s Ministry of Culture. Titled Tales of Muted Spirits — Dispersed Threads — Twisted Shangri-La, Sherpa’s pavilion will focus on the problems of Nepal and the Himalayan region often portrayed as a monastic utopia. Reshaping the myths and changing the narrative is at the core of the artist’s work. “In contradiction to a mythical utopia — shrouded in happiness, longevity, and bliss — is the reality of an intricately interconnected peoples who have repeatedly experienced displacement, loss, and the insurmountable task of reconstituting their lives,” Rajbhandari recently shared.

You should also catch Sonia Boyce’s exhibition at the British Pavilion, entitled Feeling Her Way, which begins with an installation featuring five video installations of Black musicians singing and making music at Abbey Road Studios in London. The installation offers a delightful and unique soundscape as the musicians improvise alongside one another. The British artist won this year’s Golden Lion for Best National Participation for her work.

The 2022 Biennale edition is definitely a good year to soak up Venice’s vibrancy and to witness the work of artists spearheading tomorrow’s trends and shaking up the status quo. And for the first time in its history, it also shows us that we all benefit from curatorial activism and readjusting our artistic compass.