Focaccia Barese: Local Tradition And The Quest For IGP Status 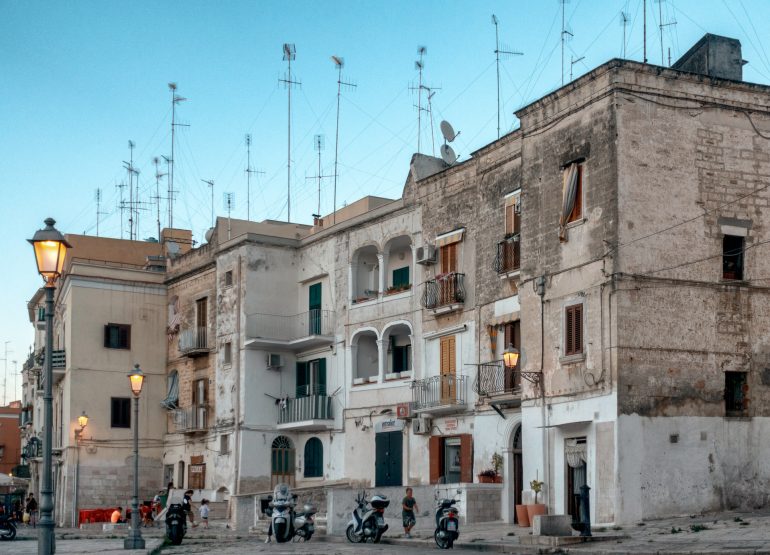 A proverb states: bread is the staff of life. In Bari, substitute focaccia for bread. There, life swirls around focaccia. It’s created and seasoned with local products. The scent of herbs, tomato and yeasted bread wafts out onto nearly every street from a focacceria or panificio (bakery). The baresi eat it daily. It’s versatile, eaten as a snack, quick lunch, enjoyed with an evening aperitivo or in place of pasta at dinner.

Giovanni Di Serio, fourth generation baker and owner of Bari’s La Pupetta focacceria, is also head of the Consorzio della Focaccia Barese, a network of individuals who seek to promote the status of focaccia barese in Europe with an IGP label (Indicazione Geografica Protetta). If obtained, the prestigious designation will mark this not-quite-a-pizza as a traditional dish of the Bari area, making it an official pugliese treasure.

Last fall I visited Bari, on a mission to devour as much focaccia barese as I could, since it’s difficult to find outside, well, Bari. (Even when it appears on menus in my hometown, it’s not always exactly done in traditional barese fashion). I fell in love with its crunchy texture and chewy bite, dripping with extra virgin olive oil and fresh tomatoes that would slide to the ground if I didn’t slurp them up fast enough. It was clear why this dish was beloved by locals. When I learned about the Consorzio, I wanted to learn more about their efforts to give this regional food the IGP label. What makes focaccia barese so special and why should it be given this honor from the European Union?

With around 300,000 residents in the city, and closer to 1 million in the metropolitan area, Bari serves as the gateway to Puglia for domestic and international travelers, as well as a port to countries on the other side of the Adriatic, like Croatia, Greece, and Albania. Travel guides used to caution against a stay in Bari, but it’s now a welcoming tourist location.

However, many visitors still use Bari as a pit stop on the way to more touristy towns like Alberobello, Lecce, or the beaches along the miles of Pugliese coastline. Yet to skip over Bari and not walk through its serpentine old town streets, or stop at a local focacceria for a slice would be a mistake. The pulse of Puglia’s largest city is found from sunup to sundown as the local forni pipe out seductive smells that invite you to run inside, or more realistically, to stop and join the line — the longer, the better the focaccia, by the way — and that impulse should be followed.

As with many pugliese dishes, focaccia has a special history. Today’s focaccia barese derives from a tradition that started just after World War II. At that time, bakeries and bread vendors didn’t exist in proliferation. In-home ovens were uncommon, and families made their own bread dough, often bringing it to local ovens (i forni pubblici) where they could do the baking. A tradition soon emerged when home bakers began picking out a portion of their regular bread dough, pressing it into a pan, and seasoning it with olive oil, slathering it with hand-crushed tomatoes, and sprinkling a touch of oregano — all of which were frequently on hand in pugliese homes — and baking it to serve as a snack to tide children over while the traditional bread went in the oven for a longer bake (unlike other breads and focacce, the barese version doesn’t require a second rise). This new olive oil-rich flatbread became known as focaccia barese.

Copious amounts of olive oil go into the dough and in seasoning the round, cast-iron pan it’s baked in, giving this focaccia a richness like no other in the bread family. The contemporary version found in bakeries is characterized by a deep golden outer crust giving way to a soft interior, thanks to the addition of 00 flour, semolina, and potato. The cherry on top is the local olive, pit included, a taste of the local terroir. Times have changed since the 50s, so many pick up a slice or a whole pie from a local focacceria, but it can still be made in a home oven, albeit with slightly different results. Most importantly, focaccia barese should be eaten while warm. It’s better to run the risk of hot tomato scorching the mouth than let it get cold, trust me.

A conversation with any pugliese will inevitably result in a discussion of le materie prime, or the raw materials of the region. These are the foods and flavors that are grown and savored in a specific area, and of which locals are rightfully proud. This is no less the case when it comes to focaccia, which requires region-specific tomatoes, olive oil and olives, and oregano in its production.

Di Serio was concerned about the adherence to using quality ingredients, and formed the Consorzio more than 10 years ago to obtain IGP status for the focaccia. If granted, this EU label will require any vendors who call their product focaccia barese to not only have met rigorous requirements demonstrating that they have used approved ingredients and followed specific methods for baking the bread, but to prove that the focaccia has been made in the Bari area. Some bakers have been known to cut corners, using vegetable oil in place of olive. And if focaccia barese is made in other countries, the elements that grow the ingredients going into it will change things, too. If Di Serio can obtain the IGP label, then the consumer will be assured that the focaccia barese they purchase in Italy and Europe is the real deal.

“When tourists come to Bari, they want to taste our focaccia because it’s part of our history, our culture. If we allow it to be made anywhere else, it might be ruined,” said Di Serio.

The quest for IGP

Preserving Italian foods with geographic indicators goes back to the mid 90s. Italy has 349 foods that are currently approved or up for approval for EU geographic labels. Based on the experience of other Italian food consortia, the process to receive the designation can take up to two decades. This hasn’t deterred Di Serio, in spite of occasional roadblocks.

One of the more challenging requirements was to find a published record, at least 20 years old, that named the food as ‘focaccia barese’, to show that it has had a long history and widely acknowledged tie to its geographic location.

Unfortunately for Di Serio, the press usually referred to Bari’s flatbread as simply ‘focaccia’ or ‘focaccia pugliese’. That was too general to prove that focaccia barese was known as a Bari-based food, and therefore not eligible to receive an IGP label.

Then, an associate assisting with research uncovered Fielding’s Italy 1991, a guidebook penned by American travel writers Lynn V. Foster and Lawrence Foster, in which they wrote about a restaurant and trullo in Alberobello that “serves authentic Pugliese cuisine, from the focaccia barese to the local lamb and salsiccia.” Seeing the two words together in print was enough to prove that focaccia barese was recognized as a regional product as far back as the early 90s.

Several years ago, he presented the crucial forms to the Brussels office, where the case must be approved, after which similar approval processes will take place in Rome, and finally, in Puglia. All that’s left to do is wait.

In the meantime, there is no IGP label required to understand how good it is to huddle on the side of a barese street, peeling back the wax-coated paper to reveal that still-warm slice of focaccia. First, take it in with the eyes, note its crisp, golden exterior, the bright punch of red tomato and the sweet scent rising from it. Look for an olive and catch it before it rolls off the slice. And once your hunger is sated, look down the street at the focacceria, where people stroll by and casually join the slow-moving line, lured in by the aroma and the crowd, same as you were moments earlier. This is the richness of focaccia barese, a treat and an experience, brought together in a food that seems simple, yet speaks to years of tradition and regional identity that cannot be found elsewhere.

“We have an additional ingredient here. We have the sea. We have the air. It’s different eating focaccia in Bari than eating it in Los Angeles.”