Italy is a country that is increasingly welcoming to queer travelers. Here we look at the very best of LGBTQ+ Italy. 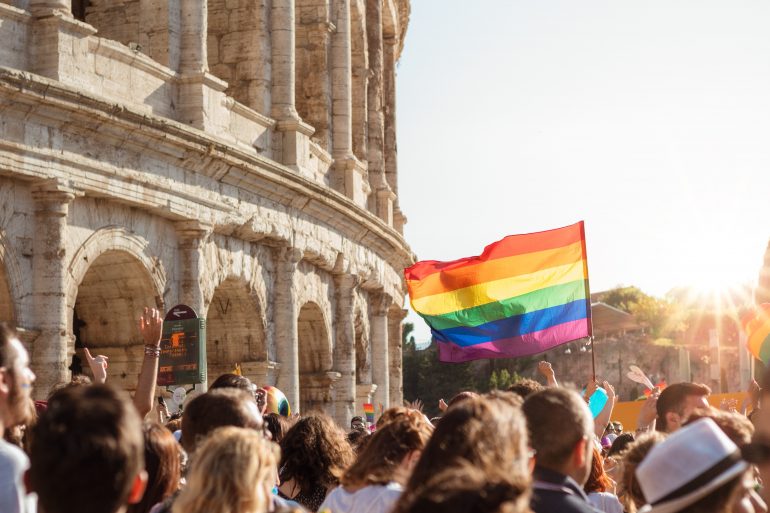 For millions of people, Italy is the dream vacation spot. With its gorgeous beaches, delicious cuisine, and endless history, Italy has attracted tourists and travelers for decades, if not centuries.

But, though extremely beautiful, Italy is also a very Catholic country that struggles to shake off a reputation for its conservative tradition and culture. The older population in Italy is very high — the highest in Europe, in fact, making up almost 24% of the entire country — and many outdated views are still held in certain parts of the country, particularly outside of the cities. Meanwhile, a strong far-right has recently led to the failure of progressive legislation in support of civil rights.

As a result, for people of the LGBTQ+ community, myself included, a bit of research is unfortunately needed before traveling to Italy. Yet don’t let it put you off. Italy is overall growing in acceptance of our community. And there are many areas that will embrace queer people with open arms.

In this article, we explore some of the most welcoming gay-friendly places to visit in Italy.

Milan is often coined the ‘gay capital’ of Italy. Not just an international fashion and financial hotspot, Milan offers a wide variety of gay bars and specific gay-friendly areas. One of these is Porta Venezia, the city’s biggest and most abundant gay friendly area. It holds Via Lecco, which proudly hosts the city’s Pride events, including a grand parade filling the entire street.

Where is best to visit?

Rome is a metropolitan city of youth, nightlife, and opportunities, combined with centuries of incredible history. There are many ways that the LGBTQ+ community can feel welcomed in Rome, from the city’s massive Pride event and various gay hotspots, to the city’s Gay Village, a series of events held since the early 2000s in order to promote the equality of homosexuality.

A few places you won’t want to miss:

Bologna is a youthful millennial city, powered by its large student population. It’s also one of the leading LGBTQ+ spots in all of Italy, notably home of the Cassero LGBT Center, an organization founded in 1978 for the recognition and appreciation of gay rights.

What are the best spots to visit in the city?

Florence has a well documented gay history dating back to the Renaissance and beyond. Today, there are many gay friendly areas and meeting places in Florence, making it a thriving hotspot for the LGBTQ+ community.

Where are the best places in Florence?

Gallipoli is a small, seaside town located in Puglia. Translating to ‘the beautiful city’, Gallipoli has been renowned in recent years for its gay scene, not only for native gay Italians but also for gay tourists alike.

Places to check out in Gallipoli:

Catania, a metropolitan city located in Sicily, is progressively becoming more and more accepting to all, especially those of the LGBTQ+ community. Like many other Italian cities, it has an annual pride festival.

Where to go in Catania?

Final thoughts for the gay traveler

There are many gay hotspots in Italy, both including those listed above and many more. For an LGBTQ+ traveler, Italy is an ideal vacation spot. However, wherever you are heading, take the time to find the places that will give you the welcome you deserve. The places and meeting points listed above, as an Italian-American lesbian, are more than friendly enough to enjoy your time as a proud LGBTQ+ person in Italy.

Don’t be worried. You may be surprised to find that Italy is actually a very open and accepting country!