Signpost On The Road To Sarnano

A border surrounds and marks the shrine. It has become a signpost, a place to turn when you want to find the family style restaurant up the hill on the rutted gravel road. 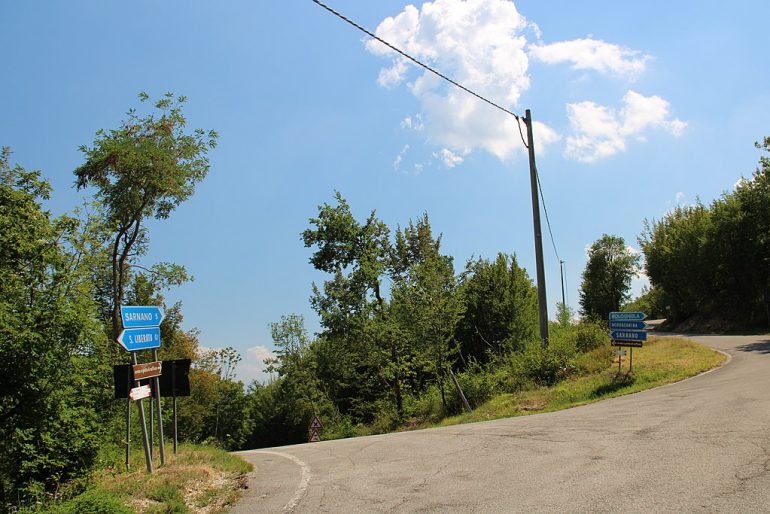 There must be more than a thousand statues of Christ on the Cross in the Province of Le Marche. This is the story of a single statue and the effect on one American/Canadian living in country.

Between Sarnano and San Ginesio, on the two-lane asphalt secondary road that wanders a bit and rises to a low hill, with a few houses and nondescript buildings, is a borgo identified on the touring club map as Gabella Nuova. There is a painted-over speed control camera next to plastic tubs that collect used cooking oil and food scraps. Nearby is a statue of Christ on the Cross at the intersection that leads into the mountains to the Monastery of San Liberato 4 kilometers away, built a thousand years ago and later sold with land to a neighboring municipality, hidden in the woods of Montre Ragnolo at 750 meters above sea level, uninhabited after the earthquakes.

In an ancient era there would have been another symbol, perhaps a cairn of rocks to mark the trail. This Christ was installed after a war which may have destroyed faith in God and Church but most assuredly destroyed belief in Man. It stood without inscription or attribution for a hundred years. A border surrounds and marks the shrine. It has become a signpost, a place to turn when you want to find the family style restaurant up the hill on the rutted gravel road.

The statue stands at a diagonal off the road backed by apartments, directing the traveler toward mountains and the contemplation of green space extending for countless kilometers, a silent sanctuary forest where boar, bear and eagles are home and man is the stranger.

The figure appears to be of bronze casting. I am sure it is not. I prefer the deception of material so that I can create my own dating and position the cross and figure into the long ago of horse-drawn wagons and sheep being herded between fields, protected by maremmano dogs, when few people left familiar villages.

In the current century, two millenia from his birth, Christ looks on with a composed face. He does not acknowledge passing vehicles. From his ankle hangs a chain highlighted by an ordinary window glass coloured stone reflecting the head lamps of oncoming cars. After years of distressed and ill tuned trucks, black exhaust has darkened his face. The motorcycles on tour with deep exhausts vibrate the bracelet, buses press the asphalt and swirl the road debris. The cross is in a center of white and green, has fencing with metal spikes and flowers in hanging pots.

Behind are dwellings. Drying bed sheets and underwear wave in the wind and reflect the sun. They might be flags and banners. People watch the traffic and centuries from folding chairs, see travelers and helmeted legionnaires on the path to empire. Across the road are gardens, tended with hand tools by old men bent with the repetition of years.

He long has stood there, blessing the walking and driven. Like buildings and gardens, he sees the seasons change from snow and ice to the heat of high summer when creatures shelter in the shade of trees and boulder walls and the smell of hay is sweet. Before him pass merchants and pilgrims, farmers, beggar and priest, homeless and wealthy. In the last war, soldiers were driven in open trucks. Today the cars have windows up and the passengers do not look outside. They have air conditioning and speak to their phones. Christ is unnoticed.

When I cycle beneath his glance, I look for acknowledgment and affirmation, wonder if he knows the world before him, how he came to be here, whether the church or citizens wished him to be a Minder. He is without judgment. I have never seen anyone speak to him in prayer or ask direction. Once in a while, hikers on the way to the national park and their campgrounds, carrying expensive cameras, GPS devices and walking sticks, earnest in manner, turn onto the white road, stride with purpose and do not see him.

When I have ridden many kilometers to the Roman ruins at Urbisaglia, tired from the return uphill climb, I stop near him and drink from the plastic bottle mounted on my bike frame. When I do not pause, I open my arms for a moment, recognition and salute, then push down the hill to the piazza in Sarnano for a cream pastry.

In winter the days are short and I arrive as the sun descends below the mountain tops. On those days the dusk deepens quickly and clouds move over him; he is stippled with light and shadow. The effect is one of melancholy. Memories come like wind-pushed mist, my past, his forever. I feel a bond, have seen moisture fall from his fingertips, tears to ground, modest splashes, drops into dust.

The cross and figure are part of the landscape. Perhaps he accepts to be ignored. There is no caretaker to fill the rain puddles or shift the drifting snow, remove the branches and leaves pushed against the cross’s base by wind and traffic. There are years between cleaning.

He stands alone, a solitary marker, 5 kilometers from one town, 1000 years to a different age. The monks of San Liberato would be pleased that he continues to guide. If the sky is crystal, the moon full and bright, stars surround him and add a crown to his thorned head.

The inattention that people pay is a quality that appeals to me. The figure of Christ is distanced from our world. Believers are few, the congregation small. We are united on that hill, connected by a string of imagined candles, the invisible thread. On a quiet road he stands as friend.