How Raw Material Shortages Could Affect The Mediterranean Diet

The Russian attack will have a long-lasting impact on our diet habits and food economy. 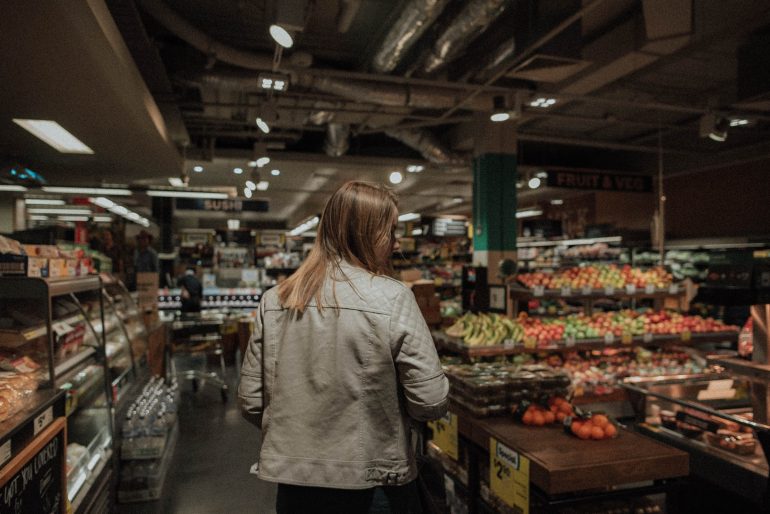 A woman stands in the grocery aisle of a supermarket. Photo: kevin laminto on Unsplash.

Valeriia, aka Valerissh, is a Ukrainian photographer from Chernihiv, a city in the north of Ukraine known for its beautiful cathedrals and vibrant restaurant scene. When the invasion and the war broke out, Valeriia hid for some time with her parents in their bomb shelter before escaping, while her parents stayed behind. These past few weeks she has become a viral sensation online after posting some TikToks titled “My Typical Day In A Bomb Shelter,” which garnered 22 million views.

While her videos have ironic and witty captions, the harsh reality she allows us to witness is devastating. Valeriia is now in Italy — you might have caught one of her interviews on the local TV. In one of her videos, during her escape, we saw her being offered Ukrainian bread from volunteers in Poland. “Let me show you something that is the heart of Ukrainian culture and our gold,” she commented, “Our bread.” It was a statement full of heart and courage that probably spoke to thousands of Ukrainians and everyone else who was watching. Ukraine has been called the ‘bread basket of the world’. The fate of the approximately 6 million hectares of wheat remains uncertain.

In the world, Ukraine is one of the bigger exporters of wheat, sunflower, and corn. According to a United Nations database, Ukraine’s exports of wheat and meslin to Italy was valued at $35.3 million in 2021. In the first half of 2021, Italy imported 122,000 tons of soft wheat (zero of durum wheat) from Ukraine, and 72,000 tons from Russia. “What is happening in Ukraine is also affecting our country, like an earthquake that sees food industries at the epicenter,” shares Ivano Vacondio, president of Federalimentare, the association of Italian food industries. This is definitely a challenging time for the Italian food industry and the people it feeds. Petrol shortage, the new cost of raw material, and other consequences of the war led by Putin, paired with the residuals of a supply chain broken by COVID-19, will have bad consequences all around.

The problem goes much further that wheat

While the problem is complex, the Russian government’s politics has been affecting the Italian food industry for years. Italy is the leader of pasta products exportation, and the Italian Confectionery and Pasta Industries Association (AIDEPI) certified that in 2016 Italy exported 2 million tons of pasta, worth over €3 billion. But the annexation of Crimea, and the sections by the EU, had led to an embargo on some European products including Italian exports in 2014. The blockade has already cost Italian food exports €1.5 billion in the last seven and a half years, shared The Association of Italian Farmers in a statement. Parmigiano Reggiano PDO as well as prosciutto and other American, Canadian, and Australian products are on the list.

As of today, the problem is now internal and some of the leaders in pasta production are threatened. By extension, it could have dire consequences for the whole economy. Italy is also the country with the highest per capita pasta consumption in the world. Italians eat more than 23 kilos of pasta per person per year. Now, Italy lacks around 40% of wheat production required to match the demands of the domestic market. In short: Italians might have to eat less industrial-produced pasta, and prices might increase. This might also push some consumers to turn to slightly more expensive — and also rare — brands that produce with local material. For instance, Barilla has a premium brand called Voiello, sold mostly in Italy, which is made with Italian wheat; Rummo is another good mainstream option. Another small business choice is Pasta Santoni, a company that prides itself on making its pasta from wheat in Le Marche. As always, the need for shorter distribution and production circuits push us to rethink our habits.

This has caused many residents in Europe to stock up, driven by fear of shortages. In northern Italy, residents are stockpiling pasta en masse. For a few weeks some products were scarce in supermarkets, including fresh fruit and vegetables, as well as various oils. On the islands, where so much of the food products are imported, the situation is even worse. Marco lives in Cagliari, Sardinia. For about two weeks there was no pasta at all. Deliveries by lorries had come to a halt all together. He shares that some residents were highly anxious and panic buying, a repetition of the first few months of the pandemic.

This is a general feeling and it doesn’t only apply to food. Pharmacies in Norway are out of iodine due to security concerns over the Ukrainian nuclear power plants. This is the tip of the iceberg of the consequences of globalization and the world to come, especially with the impending threat of global warming. The whole pasta industry in Italy might need to be rethought. It is currently cheaper to import wheat from America — or up until a few weeks ago, Ukraine — than grow it in Italy. A farm in central and southern Italy has a production cost of around €22 per quintal of local wheat. Foreign wheat? Around €18/20 per quintal. A small margin that changes everything.

How is it possible that a grain of wheat that travels for thousands of miles costs less than the Italian one? How did we get to this fragile model? Glyphosate, the herbicide, is one of the parameters. Wheat in Italy cannot be treated with it, making it less resistant. It is common for foreign wheat, however, which makes it more affordable by extension. The potential shortage of pasta and other products made from wheat might lead consumers to buy less pasta, but it might also encourage a new thought process. How do we simplify our food circuit, and create sustainable practices that are economically viable for the local farmers? After all, the core aspect of the Mediterranean diet is fresh, local produce.

The Mediterranean diet: a new model is needed

The Mediterranean diet, praised by scientists all over the world, has had to adapt to our world changes for the past years. The fabric of our rural communities, industrialization, and the need for profit have changed food systems in southern European countries. FAO, the UN’s Food and Agriculture Organization, raised the alarm a few years back. “The Mediterranean diet is being undermined by climate change, a misuse of natural resources and a brain drain which are damaging the social fabric of rural communities,” they shared in their publication entitled Mediterra.

Let’s take the magical Italian tomatoes. Puglia, one of the sunniest regions of the country, is a big producer of tomatoes. The province of Foggia has been nicknamed the Tavoliere (the table). It’s slightly elevated above the sea level and has rich and fertile soil, ideal for growing produce. Many family run businesses and small farms’ livelihood depend on tomato production, a staple of the Mediterranean diet. After all, what else but a tomato tastes like a perfect southern Italian summer? But once again, their mass production has a dark side to it — not just healthwise, but humanitarian. Over the past few years the light has been shed on the terrible conditions of workers — often migrants — who are cultivating tomatoes for mass production. A few years back, 14 immigrant farmhands in Foggia were returning home after a 12-hour shift picking tomatoes in 40°C heat, when the substandard minibus that was driving them got into an accident. Twelve of them died. Many NGOs described their conditions as a modern form of slavery, living in isolated rural ruins or shanty towns. This has led to a social movement, and many farm workers have begun to speak out. The Mediterranean diet is no exception to the flawed global food systems we have entrapped ourselves in. New models have to be fought for and rebuilt.

The rich Ukrainian black soil, chernozem, is the ideal ground for growing wheat, much like Italy. It has given Ukrainians their rich cuisine, including ‘Kyiv bread’ made with wheat and rye flour and malt.  The yellow of the Ukrainian flag represents the wheat field while the blue stands for the sky. Anna [name changed] was a journalist in Kyiv. She decided to stay behind to work for foreign media covering the war. “I love my country, we have everything, it’s paradise,” she says.

We must remember that the soil under our feet, our culinary traditions, they are part of our identities and global DNA. While the Mediterranean diet is threatened by globalization, food circuits, and importation demands, it also deserves to be defended. It is time we reach a more conscious turning point and reverse some of our habits. The current situation might paradoxically lead to a newly acquired awareness and push to action when it comes to food justice, sustainable agriculture, and fair and humane practices.

If you would like to support the people of Chernihiv and their access to food and necessary supplies you may do so at this link, your donation will go to the volunteer organizations on the ground.