The humanitarian effort for Ukrainian refugees in Italy is constantly evolving in response to the war. 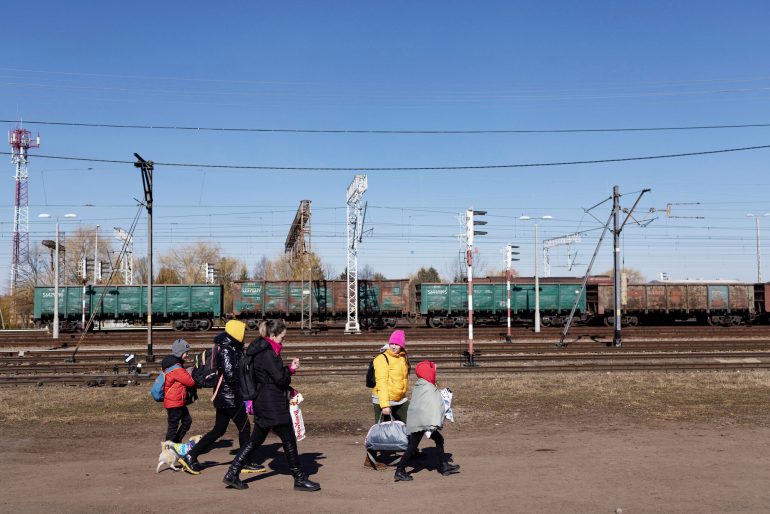 As Ukrainian refugees start to arrive in Italy’s cities and towns, both international and local charities are spearheading the humanitarian effort. 900,000 Ukrainian refugees are predicted to arrive in Italy over the next six months — and around 50,000 have already made the journey here. But as the catastrophic situation in Ukraine rapidly evolves, the reception effort for refugees needs to continuously respond.

Charity organizations and people here have been swift into action and are stepping up in solidarity to provide help in any way they can, from donations to welcome boxes, homes, and hospitality. In the immediate response to the crisis, people’s selflessness has been humbling. But, with peace talks just in their infancy, what happens over the longer term as the war rumbles on into its second month? Will this spirit of goodwill and selfless sacrifice hold out?

We found out what Italian charities are expecting.

Charities based in Italy are familiar with the procedure

Italy-based charities such as the Italian Red Cross (Croce Rossa Italia) already know the drill and have immediately launched appeals to collect emergency funds. These are being used to provide food, water, medical supplies, and safe passage for the displaced. Caritas Italiana, for example, with its global network of church-based operations, has already provided humanitarian support to 815,000 people in Ukraine, in collaboration with Caritas organizations on the ground since 2014.

Caritas visits to Poland, Romania, and Moldova — countries that all share borders with Ukraine — have highlighted the fast-changing needs triggered by enormous numbers of refugees flowing across their borders in search of safety and peace.

The horrors of this war, taking place right on European soil, mean there’s no shortage of interest in this conflict across the rest of the continent. Europe has seen an outpouring of generosity to help the plight of millions of Ukrainian citizens who have either fled or who remain in shelter from the bombs back home.

Highly experienced in understanding the subtleties and repercussions of conflict for civilians on European soil, Caritas Italiana’s Daniele Bombardi, the Coordinator of Caritas operations in the Balkans, recently gave an interview to L’Azione on his organization’s response to the crisis. He underlined the need to protect the most vulnerable people affected in war zones — the children in orphanages, the elderly and disabled, those who are already marginalized and at risk of being ever more peripheral.

Yet Bombardi also recognized that the current momentum of humanitarian support can quickly wear thin, especially if the war develops into one that is long and drawn out. If this comes to pass, the economic and operational support systems established in Ukraine will need to be heavily revised in order to guarantee their long-term management.

Government aid for Ukrainians for the next six months — but then what?

The same goes for those in Italy, where the Italian government has roughly estimated figures for a six-month period. The government has pledged Italy €25 million in humanitarian aid, approved recently by Italy’s Deputy Foreign Minister Marina Sereni, and a national fund has been set up similar to those for people displaced by earthquakes. This covers between €600-900 per month for homes that can be offered to refugees, where the focus is on areas that have seen declining populations in recent years.

But what will happen when the six months turn to seven is anyone’s guess. The first wave of refugees has been hosted either by their relatives — there are just under 236,000 Ukrainians in Italy concentrated in big cities such as Rome, Naples, Milan, and Bologna — or in some of the COVID-19 hotels that are now lying empty. Yet a time will come when, in both those cases, the newcomers will either want to or have to move out. Then what?

And, just as pressingly, will Italian government and charity coffers be topped up if the situation in Ukraine turns into a protracted conflict? As well as homes, Ukrainians coming to Italy will need access to healthcare, work, and schools. Last week, Lyudmyla Solomon, a Ukrainian woman working as a representative for the Council of Immigrants at the Municipality of Bolzano, who is helping with the reception of refugees arriving from Ukraine, pointed out that Italian language assistance is the most urgent need for newcomers, as it makes finding a job easier and helps children assimilate into schools.

Meanwhile, there’s also the issue of extra bureaucracy for Italian police departments and immigration offices throughout Italy, with trade unions already threatening strike action if more resources are not provided.

Grassroots charities: our loose structure is our strength

Grassroots charities, which are free of the bureaucratic minefields that other larger organizations are obliged to navigate, may provide something of an answer to how the needs of refugees can be met more rapidly.

International charity organizations such as the Red Cross, Caritas, and Sermig all have the structure and international backing that Balkans Caritas Italiana Coordinator, Bombardi — again speaking to L’Azione — says is key to support refugees over the longer term when the challenges become more complex and political in nature. He emphasizes the importance of their strong networks that are crucial in providing shelter, the transportation of food and hygiene aid, and delivering people to safety across borders.

Yet for smaller organizations, it is precisely the lack of structure that is their strength. At least, that’s what the five women behind the Turin-based charity, The 4 Day Box, told Italics when we spoke to them.

The charity, brainchild of Norwegian Annelise Borgen Rizzo, and led by her and Jamie Pitucci, Renate Hendlmeier, and Cristina Burdett, and Rosemary Parry Vine, operates from the Istituto Alfieri-Carrù in downtown Turin. It provides each refugee child with their own personal welcome box containing clothes, shoes, underwear, hygiene products, and a toy.

“The charity is about people coming together in an organic way,” rather than through any formal structure, Annelise explains. “It has simply been a groundswell of people being generous with their time.”

Being nimble, lacking ego, and being open to new ideas are the qualities that the five women say have been the backbone of a rapidly evolving situation. Now, over seven hundred people are involved — from simply making donations to packing welcome boxes — with local market stall holders, schools, suppliers, and local taxi firms all doing their bit. Ukrainian refugees have also turned volunteers themselves, providing much needed linguistic support for newcomers and social media savvy to spread the word.

Annelise remembers that when she first arrived in Italy, she spent her first few days without essentials as the airline she flew with had lost her luggage. The difference between her experience and those of the Ukrainians she works with now is that she knew that eventually she would get it back. She says this realization of what it was like to be without just for those few days was the inspiration for the boxes.

“I can’t imagine what it would be like to literally arrive with nothing,” she says.

People coming together for a common purpose

“The reaction has been a healing of people coming together,” Annelise explains. “For so long, we’ve been told to stay home and do nothing. But now people come in their lunchbreak and the next time they might show up with a friend.”

Ukrainians already living in Turin have taken time away from their jobs and lives to set up an honorary consulate in the city that can help deal with the bureaucracy and refer people on. Support has quickly evolved — and it is not only limited to Ukrainians. Afghans and Russians have received welcome boxes too and Annelise is also now reaching out to her international connections.

“One thing that we quickly noticed was that Ukrainian adolescents tend to be taller than their Italian counterparts so the sizing for clothing had to be adjusted accordingly,” explained Jamie, emphasizing the need for creative thinking to make sure things work. “We think on our feet, throw stuff on the wall, and see what sticks. We’re open to all ideas because anything could work.”

In the end, whether you’re coordinating an international charity, or if you’ve taken the initiative by setting up a local gig, each relies on the presence and hard work of the other. Indeed, we should all be doing what we can, to get things moving and to provide the structure and agility necessary to do what is needed most: to come to the aid of civilians, the innocent victims of war.