Bickering About Whose Protest Is More Authentic

The thin line that divides the Italian pacifist movements. 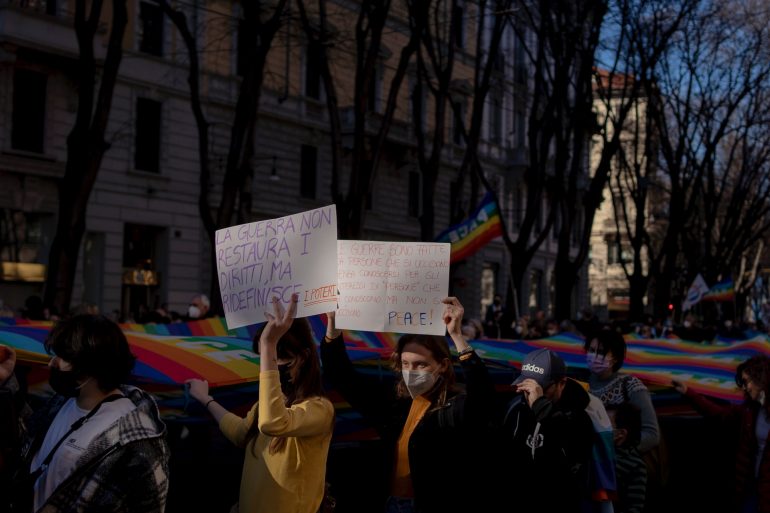 “Neither a man nor a crowd nor a nation can be trusted to act humanely or to think sanely under the influence of a great fear.” — Bertrand Russell

When conflict of the magnitude of the invasion of Ukraine happens, the reactions and understanding of non-expert observers can be varied, simplified and, most of all, polarized. Because, if anything can divide opinions, it’s whether or not one needs to be ready to fight to the end for something one believes in. We’re not sure about this. In the current crisis, we get the feeling that the usually vocal peace movements are reacting out of a position of fear and uncertainty and are resorting to less risky caution. The pacifist manifestations that have often had the jollity of a pre-football match crowd as they snaked through city centres making political statements from their theoretically well thought out long-existing positions, have suddenly become protest against injustice to a people and to a nation that have real consequences for the planet itself and for ourselves in it.

Why so many peace movements?

The fact that in Italy alone there are over 150 ‘Peace Committees’ shows that there is some kind of power hierarchy among them. Shouldn’t no-war be their strongest bond? In theory yes, but some groups don’t seem to be so completely bound to their anti-war stance that it trumps any other persuasion they may have. Re-enforcing existing positions on refuting war, invasion and occupation on a theoretical level is very different to refuting a catastrophic war on one’s own doorstep.

I recently heard a discussion on the invasion of Iraq by the USA in March 2003 on the pretext of removing a regime that developed and used weapons of mass destruction and harboured and supported terrorists. In the discussion it was claimed that the banners and slogans by the millions all over the world were the colors of the rainbow of peace flag against all forms of war and aggression, no matter where they were aimed. They didn’t make political statements about one or the other country as such. They wanted to propose that another solution had to be found, that war had to be a non-option.

Can war ever be a ‘just solution’?

This is what some activists want to happen again today. They want to send this message to both the Ukranian people and the Russian people. But it’s not that simple. Citizens not affiliated to peace movements want to make their voices heard too. What they do is noble. They wear yellow and blue. They drape Ukranian flags from their balconies, schools, churches, they sing at pro-Ukraine rallies. This is what Pope Francis preached while indirectly rebuking the head of the Russian Orthodox church, Patriarch Kirill, telling him that the concept of a ‘just war’ was obsolete since wars were never justifiable and pastors must preach peace, not politics.

As we said, all noble but that is not what the Peace Movement with Capital Letters needs to do. This should not be a hurried, improvised agenda where planners may be tempted to reduce things to black or white, good or evil, right or wrong. That simplistic view never coincides with the reality of the causes, remote and immediate, of the destruction that is now developing in real time after having simmered for decades. Reality is nuanced, subjective and fluctuating. It’s often the fruit of poorly thought-out decisions or the knee-jerk reaction of a leader who expects to be listened to and obeyed without question as much as in the studied tactics of diplomats and statesmen.

Breaking the conditioning shackles of past affiliations

Being part of a coordinated Global Peace Movement with no political affiliations must become a commitment as essential to every citizen as a nation’s being equipped with armed defence forces. This Movement would have rules and regulations as opposed to ‘see you on the street’ activism. It would adhere to international peace standards and its members would be on hand to identify, confront and, as a last resort, economically sanction rogue countries. Like a city’s firefighters who don’t have to be constantly active but must always be alert. If a peace movement must first look into the political identity, affiliation and the past history of a potential aggressor before deciding to act in order to help an attacked community then war will be inevitable. The international positions of the West and the wish to maintain ties with Russia “because we need them” are still the yardsticks that some Italian Peace Movements are using. If this contradiction and the old East-West logic continues to dictate policy and if dialog is rejected a priori, then peace initiatives are themselves pointless.

We have seen that no country is consistently a friend or an enemy to another, and this is as it should be. Countries can agree on some policies and disagree on others without going to war over them. So can people and groups. But there are some issues, like unprovoked invasion, and the consequent destruction of property and loss of life that can have only one response — unanimous condemnation. A regime that knows exactly what reaction the attacking of a neighbor will provoke in the international community and that the price to pay will be high enough to bring that regime to its knees, may think twice. But if governments, mass media, peace advocacy groups, religious leaders cannot decide on a unified position in moments of grave crisis then the aggressor will march on. What chance of understanding is there for those of us watching from the sidelines?

Making sense of the senseless

I’ve decided that, from the point of view of a somewhat confused onlooker trying to make sense of the conflicting theories put forward by the  professional observers, I’m going to try an alternative way of reading the unfolding of the war drama. I’m going back to drama as in theater.

My tragedy is entitled Keeping The Neighbors Where We Want Them. We are all getting familiar with the many characters in the play particularly the four protagonists, Vladimir, Volodymyr, Jinping and Joe. Each of these has a version of what a good neighbor should and should not be or do. My Tragedy must, of course, have a Chorus to sustain the narrative, explain the subtleties as our own chorus of commentators do today, act in various smaller roles, provide crowd scenes and guage the temperature of audience participation and approval. In its roles, the Chorus is sometimes moving, fleeing in terror, protesting, arguing about what they’re there, pushing in anticipation of shelter, transport, hope, sometimes standing in line for hand-outs, at funerals, at gunpoint, sometimes lying motionless. Some of the Chorus is there because they have their own axe to grind or because they just like to protest, it’s in their nature.

One problem with my narrative is that Vladimir starts acting his role before I’ve finished writing the whole play. He takes his neighbor Volodymyr unawares and breaks into his house saying it was once his and Volodymyr has to jump in to try and save it. The Chorus is giving dozens of explanations for Vladimir’s agression of his neighbor saying he is acting out of great fear though it’s not clear of what. They all try to make sense of his explanatory monolog, but people aren’t paying enough attention so Vladimir threatens to destroy them all, himself included, if Volodymyr doesn’t accept that his point of view is the only one that matters. This latter calls all the neighbors he can muster and they promise to help but they won’t give him a weapon to kill the intruder. The question of arming the victim of aggression divides the Chorus. They say there has to be another way. Peace, the Chorus explains, is man’s noblest and most difficult endeavor. And the aggressor has been a good neighbor at times. Better to capitulate, some suggest. True pacifists cannot condone war as a solution but neither can they stand idly by. A lot of other players will come on stage. Jinping, Joe and all the secondary players who are enriching the narrative, will testify, like Shakespeare’s Macbeth, that:

Life’s but a walking shadow, a poor player
That struts and frets his hour upon the stage
And then is heard no more.

I don’t mean to be flippant in adding that Keeping The Neighbors Where We Want Them will, unfortunately, be playing on our screens for the foreseeable future and nobody knows how the unfolding drama will pan out.

In conclusion, another of Russell’s maxims is apt:

“You must not kill your neighbor, whom perhaps you genuinely hate. But, with a little propaganda, this hate can be transferred to some foreign nation, against whom all your murderous impulses become patriotic heroism.”