Discover The Abruzzo Region With The Italian ‘Trans-Siberian’ Railway

The humble Italian Trans-Siberian railway has overcome war and government cuts in order to take travelers back in time to some of the best hidden gems in Abruzzo. 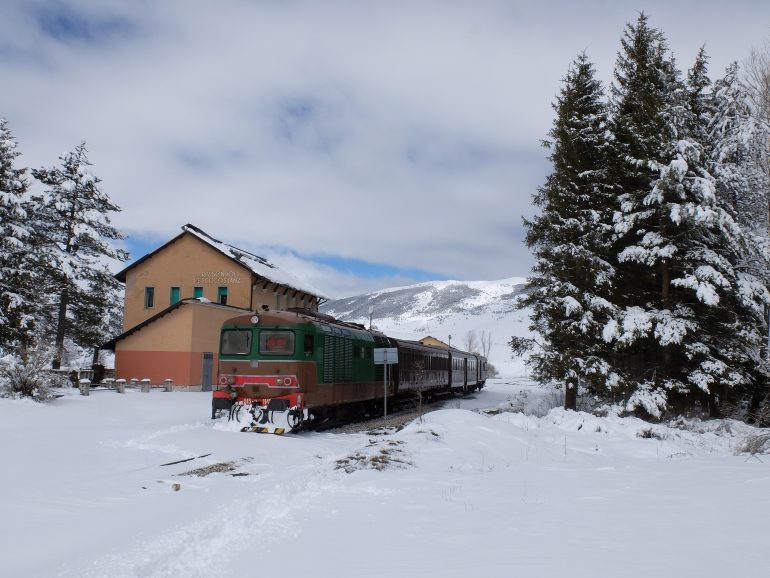 Whenever the Trans-Siberian railway is mentioned, you’ll likely think of the longest man-made rail line that crosses Russia from Moscow to Vladivostok. However, Italy boasts its own historical route that has lovingly been named the country’s own ‘Italian Trans-Siberian’ railway, with connections between Abruzzo and Molise on a journey of vintage carriages.

Perhaps a comparison to the original, iconic Trans-Siberian may be a bit of a stretch, but many find the Italian landscapes of the Abruzzo region to be far superior to those seen on its eastern European counterpart. Either way, slow train travel has made a comeback in recent years, and those eager to hop aboard can now be treated to a stunning, single-day itinerary through central Italy.

History of the Italian Trans-Siberian railway

The Italian Trans-Siberian railway originally began operation in 1897 with connections from Sulmona in the Abruzzo region, to the town of Isernia in Molise. At the time, the train served more of a functional purpose to connect small villages within the Apennine mountains that would otherwise be isolated from larger, essential cities such as Rome. The railway was completely destroyed by the Nazis during World War II, but it was later revived in the 1960s only to slowly decline with the pressure of new high-speed trains and government cuts.

Years of non-use would pass before a group of train travel enthusiasts rallied behind the retired Italian Trans-Siberian railway to bring it back to life in 2014. They founded the Le Rotaie association dedicated to safeguarding historical railways and ultimately partnered with Fondazione FS who manage the country’s rail network.

This particular line has always been considered a true engineering marvel due to its requirement to climb through some of Italy’s most daring landscapes in order to reach previously inaccessible locations. Today, the train still reaches a peak altitude of 1,268 meters (or about 4,200 feet) on this route, lending it to pass through the second highest railway station in all of Italy. The original steam locomotive has long been replaced by a diesel engine, but the vintage charm of every other aspect of the train remains the same.

Abruzzo by the Trans-Siberian

Most globetrotters will be familiar with the Italian regions of Tuscany and Piedmont, or cities such as Florence and Venice, but to name renowned places and happenings within the Abruzzo region? Not so much. The rugged terrain of Abruzzo greatly hindered its economic development throughout history, but construction of a motorway from the west stretching to the Adriatic coast finally opened up long-awaited accessibility to the rest of Italy.

This central-eastern region is potentially one of Italy’s most diverse. Dotted with lakes, national parks, the sweeping Adriatic coastline, and commanding mountain ranges make it a great destination to house a handful of UNESCO-designated sites and untouched medieval towns. Sulmona, often considered Abruzzo’s crown jewel for its perfect location and famous candied almonds, is also the departure town for the Italian Trans-Siberian railway.

The train departs from Sulmona every Sunday morning year-round, usually at 8:45 sharp. Passengers are greeted by its five classic brown carriages adorned with greenish-gold velvet curtains that provide just a slight peek in to its vintage interior. When purchasing tickets, passengers are given the option of the centoporte section with its original wooden benches, or the more modern ‘first class’ option, corbellini, that boasts red padded armchairs and sweeping panoramic windows.

Once aboard, urban landscapes soon give way to rolling hills and staggering viaducts that guide the train deeper into its picturesque route. An hour in, the train rolls to a stop in Palena, a small village within the Majella National Park. Perched on a high plateau, you’re gifted with additional top-tier views amongst the colorful town lined with food stalls and smiling vendors who welcome the train’s guests for a quick bite before returning to their carriages.

The train continues its climb upwards towards its highest altitude at Rivisondoli-Pescocostanzo station before beginning its descent into the Molise region. Its first stop here is in Carovilli, an area known for its tasty caciocavallo cheese and truffles. Passengers can opt to disembark here and stay in the town, catch a later returning train, or continue onward to the journey’s final destination.

By early afternoon, rolling hills turn to dense forests with the occasional medieval castle in the distance as Carpinone, the last stop on the itinerary, comes into view. Passengers are given a few hours to explore the village and all its charm before ultimately returning to Sulmona. Carpinone is a quiet place that is guarded by an 11th Century castle and lined with cobble-stone alleys. Locals are often eager to talk to the tourists who have made the journey out to their sleepy town.

At 5:00 that evening, the train is ready to make its return journey to Sulmona. With just a couple technical stops along the way, the faithful Italian Trans-Siberian railway pulls back into its original departure station by 8:00 p.m. A condensed 12-hour journey, come and gone, has just produced some of the most stunning and diverse landscapes, villages, and people in one of the more lesser-known regions of Italy.

Although this itinerary is the most common, there are other routes offered throughout the year on the Italian Trans-Siberian. Tickets range from €30-40 depending on the train class that you choose, and you can purchase these tickets from the La Transiberiana d’Italia website.