Why Is There A Bust Of Lenin In The Center Of This Italian Town?

A story of transnational solidarity through the ages. 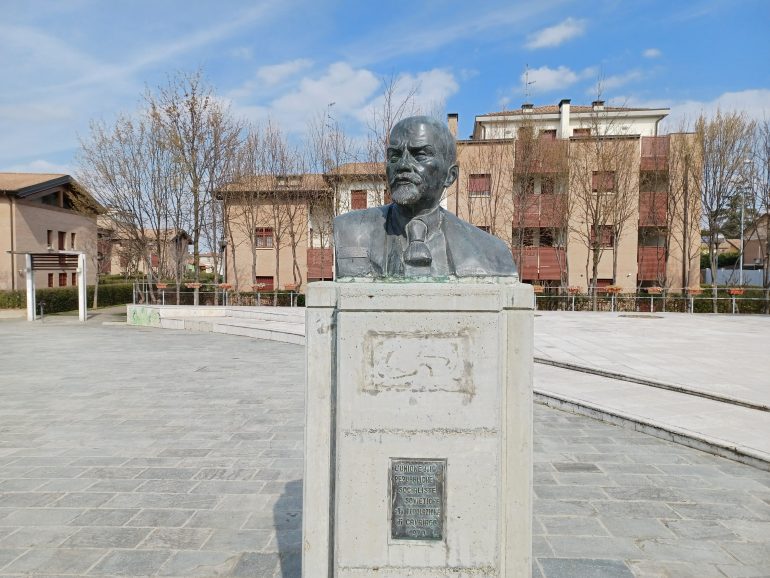 Cavriago, a small town of around 9,000 people in the Italian region of Emilia-Romagna, doesn’t make the news much. But this unlikely settlement has one claim to fame. In the centre of the town sits a bust of Soviet leader Vladimir Lenin, donated by the Soviet Embassy in Rome in 1970. In fact, it is one of the few — if not only — monuments to Lenin to be inaugurated in a public place in Western Europe during the Cold War.

So how did it get here?

The bust was made by factory workers in the Ukrainian city of Luhansk in 1922, thus also making it one of the few surviving busts of Lenin to have actually been manufactured during the Soviet leader’s lifetime. On 22 July 1942, the bust was stolen from Luhansk by Italian soldiers during Italy’s supportive invasion of the Soviet Union alongside Nazi Germany. The bust followed the soldiers back to Italy and turned up in Tuscany after the War, upon which it was returned to the Soviet Ambassador in Rome. On 22 April 1970 — the centenary of Lenin’s birth — the bust was donated by the USSR Embassy to the town of Cavriago.

Since the founding of the Italian Socialist Party in 1892, and indeed long before that, the region of Emilia-Romagna has been a hotbed of left-wing activity.

In 1918, debate was raging among members of the Italian Socialist Party in Cavriago between those who supported the actions of Lenin and Bolsheviks, and those of the more moderate wing. The Bolshevik current won out and published a motion supporting the pro-Lenin line of the national socialist paper Avanti! and its editor Giacinto Menotti Serrati “for the incessant struggle they continually fight […] and for the approval of the program of the German Spartacists and the Soviet of Russia […] and applaud its leader Lenin for his tireless work fighting against the reactionary supporters of imperialism.” This communiqué from a small local Marxist group was published in the next day’s issue of Avanti!, a copy of which was also sent to Moscow.

Remarkably, the copy seems to have ended up in Lenin’s possession, and the story of a tiny Italian village supporting the Bolshevik struggle moved him so much that he mentioned it in a speech to the first congress of the Third Communist International in Moscow on 6 March 1919:

“Comrades, we try to isolate ourselves from the rest of the world in such a way that we receive the socialist newspapers of other countries with great rarity. One such rarity is an issue of the socialist newspaper Avanti! I read there a correspondence from a place called Cavriago — a small village, evidently, because it is not on the map — and I see that the workers, after meeting, have approved a resolution expressing sympathy for the newspaper for their steadfastness. Well, when we read such a resolution of any remote Italian Poshekhonye, we can rightly say that the Italian masses are for us, that the Italian masses have understood what the Russian socialists are!”

On 6 September 1921, the village council of Cavriago approved a resolution to donate a large sum of money to the Soviet cause.

“Accepting the invocation of pain and hunger that the brothers of Russia throw to the world too foreign to the great misfortune, interpreting in addition to material aid, moral assistance and encouragement to the Soviet proletarian government, we resolve to grant a non-profit subsidy of no less than 500 lira.”

This was to be one of their last actions. A few months later the council was forced to dissolve under threats of fascist violence. Following the seizure of power by Mussolini (ironically, himself a former editor of Avanti!), a central prefect was appointed mayor, ushering in the period of fascist dictatorship in Cavriago that would last until Liberation Day on 25 April 1945.

Between 1946 and 1991, Cavriago was governed by an uninterrupted streak of Communist Party mayors, a situation common to many villages, towns and cities in Emilia-Romagna, which formed part of the historic ‘red belt’ of Italy alongside Tuscany, Marche and Umbria.

In April 1970, to celebrate the centenary of Lenin’s birth, and in honour of the village’s ‘historic’ link with the Soviet leader, the municipality of Cavriago decided to name a square after him. For this occasion, the USSR embassy in Rome donated the bust of Lenin which they had kept in their offices for the past 25 years. Unfortunately, due to persistent vandalism and an attempted bombing, the original bust was moved to the town hall and a copy was put in its place in the newly named Piazza Lenin.

Cavriago is an odd place. Largely destroyed during WW2 and then rebuilt in an anodyne, modern style, it has the grey, foggy demeanour typical of the towns and villages stranded in the middle of the Po Valley. Piazza Lenin is today a large square surrounded by trees and glum modern houses, the monumental sight of a Conad superstore rising in the distance.

Though the Communist Party effectively disintegrated in the early 90s, the Cavriaghesi have continued to elect left-wing mayors and continue to celebrate the village’s radical, defiant history. In the 90s, during an epidemic of ‘weeping’ Madonna statues, tears were painted on Lenin, apparently inconsolable at the collapse of the Communist Party and general incompetence of the Italian parliamentary left.

In 2020, the village celebrated 50 years of Piazza Lenin with a series of events, including speeches by surviving partisans and a demonstration of the original bust, still kept in the village’s old town hall. Piazza Lenin has been a source of inspiration for many Italian musicians, such as the Reggio Emilia-based band Offlaga Disco Pax, whose song Piccola Pietroburgo (Little St Petersburg) is a tribute to Cavriago, its people and its Lenin statue.

Cavriago’s website proudly states that people come from all over to see the bust of Lenin. Maybe it’s symbolic of a small town against the world mentality. Or a vindication of an ideology that has achieved hegemony in a local community. Or maybe it just shows that small acts of solidarity can really make a difference, and continue to reverberate decades later, even in this remote Italian selo.