The Woman Across The Cortile

Her name is unknown to me. But I enjoy the sight of her in the window and the shadow dance as she crosses the room. It’s not affection, but comfort and association, the sharing of town, time and pain. 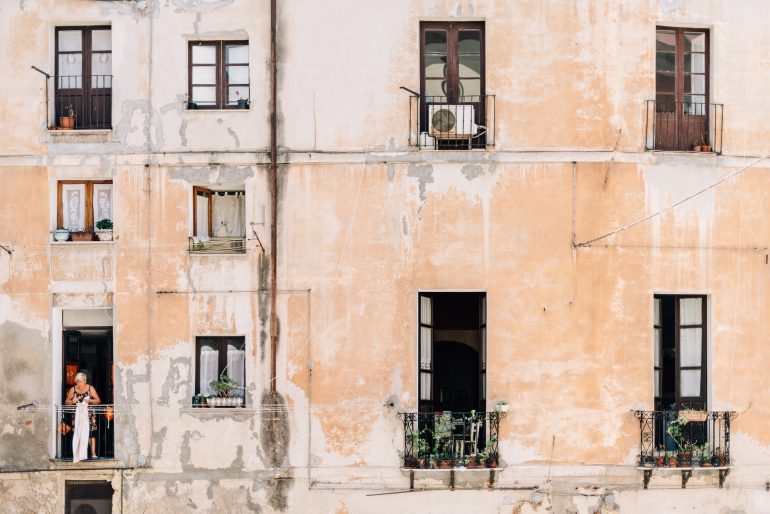 Woman on a balcony in Cagliari, Italy. Photo: Roman Kraft on Unsplash.

To find my apartment in Sarnano, a hill town in southern Le Marche built in the year that the Mongolians invaded present-day Greece, you first have to pass the main piazza with new shops and a peaceful park, tall trees and a small fountain which supports the local pigeon population. Then you take a circuitous route to the Piazza Perfetti inside the centro storico. If it’s a weekday and you are lucky, you can park in one of the seven or eight marked spaces. Looking upward at the comune offices, the shutters open at 08:15 and the breeze from the mountains is cool. In the apartment next to an unrepaired palazzo, a Canadian woman opens the window and shakes out a bedspread. The light slides in and paints a checkerboard on the bedroom wall.

You walk up via XX Settembre about 15 meters, turn right and climb awkward steps to a landing, left with three more shallow rises, cross under a little bridge which has kept the buildings separated for centuries. You are in a private cortile with one house on the right and my apartment on the left. A wonderful place for coffee in the summer and doing nothing behind 20-foot-thick walls which amplify the peace. The only things they could not keep out were plague in the 14th Century, and COVID in the 21st.

Five and more years ago when the earthquakes destroyed hill towns in central Italy, Sarnano stayed occupied and mostly standing. The Carabinieri in caution blocked the gates and entrances, and posted soldiers. The guardians went for coffee on a regular schedule. There were nine of us who remained in the centro, keeping windows dark and finding our way by stealth. The centro was silent. I wore soft-soled shoes, slipped past the police and could hear swallows landing on chimneys. The police were earnest and well-meaning. I had been in Viet Nam during the war when the penalty for carelessness was more serious.

In the present time, I occupy an apartment on one level. Across, the house is standard hill town, which means it was last renovated more than a hundred years ago, and the cantina has kindling from the century that saw the unification of Italy. If you are in the cortile it’s hard to imagine two world wars, the League of Nations come and gone, Depression, partisans and the invention of jet planes. The potted plants are green, yellow and pink. The air is still and you forget it is 2022.

When I came to Sarnano, the house opposite was occupied by a couple, both in their sixties. There was a fireplace and wood was brought into the cantina to heat and make meals, a supplement to the costly natural gas. The wood was precious and attended. On occasion I saw the man bring it from XX Settembre by the armful. He never asked, but when I saw him walking up the steps, I helped and felt much superior as a North American, where it’s delivered by the cord and fire is mostly for decoration.

From my apartment I look through the cortile into the living room of my neighbor. It is where she keeps the television and sets table for herself, her dead husband and two children in the north of Italy. She lights a candle in the evening.

She can see me as I walk from bedroom to bath with a towel and robe on, when I move around the apartment, coming and going on my affairs. We have competing basil plants on our window sills. I went for size and she for a nice rounded appearance, better flavor and not spindly. The sun treats us equally. The plants grow every day and at least for me, makes me proud of being a part time farmer. I see the purple glow of indigo, gold in the flowers.

For the most part our eyes do not meet. It is a violation of privacy, and avoidance is practiced as a courtesy. If I see her in a house coat I look the other way. Sometimes we smile and wave or point to the basil plants.

In the past few years her children have visited with increasing frequency and less enthusiasm. I know they are coming; she has her hair done and dresses formally. She wears colors, prepares more food and I see her walking to the house from the market, putting in supplies. There are filled garbage bags hung to be picked up by the town.

This holiday season I took her and some neighbors homemade pastries made from store-bought fresh pasta brisee, sold in Italy, produced in Poland. People seem to like the effort as much as the result. She thanked me for the plate and closed the door.

We are not friends, this woman and I. Her name is unknown to me. The gulf is too wide, customs, culture, the habits of age. But I enjoy the sight of her in the window and the shadow dance as she crosses the room. It’s not affection, but comfort and association, the sharing of town, time and pain. She lost her husband and I lost my wife a few years before. We share grief, bound by tears at bedtime.

There are not so many people now in the centro. Ghosts live with the echo of footfalls and mewing of cats, birds hitting the terra cotta tiles looking for a roost. In the summer there are many more people; they visit, amuse themselves and go away. The cleaning women come, freshen bedding and check for water leaks. The past inhabits leaving smudges and faint traces.

Before Christmas the children came and she left with them. She middle-tied the curtain in the window with a red ribbon and turned off the lights, the basil plant was taken away, the cortile swept with an ancient besom of twigs and brush. I count the days by rain, snow and the early night. It has been a month. I believe she is dead or having a good time with her grandchildren and alternate between the choices but this is the longest time I have not seen her, so I tend toward death or a long illness without a good prognosis. It is likely her name will be on the death board outside the Brunforte Gate. She was always strong, long strides up steps and fast on the flat, a stern mother with the matriarch’s smile. Things change and people weaken. I see her in a coffin. Rocky Balboa said in the movies, time always wins.

I do not speak only about two residents of one hill town, but of a thousand hill towns throughout Italy, dying, brick and stone buildings mute and gray, the faded posters of upcoming festas, the centros showing illness we hoped only applied to people.

Before the second of the great wars, these towns were proud of their independence and the life that flowed through arched gates. The killing ended, families that worked the land broken and no choice but to move from the familiar clock towers in the sun. Attrition was the uncovered wound. Italy changed, cars became larger and faster, the depletion accelerated and the centro was drained. The disease and the cure were the same.

Until they came back, one by one. Slowly, slowly, piano. Those who remembered, missed clear air and the poetry of heavy carved doors, the bass-toned lion knocking handles and the wrought iron rings that held horses. They wanted respite from noise and the crowds that overwhelmed each other in the cities. The historic center grows like the basil plants in daylight; young feet wear down the stones to the Piazza Alta.

There are new families within sight of my windows that look to the mountains over the Piccasera. The laughter of children increases and multiplies, bouncing from stone to stone and running along the lanes. The street lights are on, half wild cats on patrol, hunting for rats. There are lovers behind the doors. You smell dinner, hear the crackle of wood burning and arguments. Women smoke in the open windows, flicking ashes. Level to level, greetings and news are exchanged with smiles and gestures, flower boxes filled with fresh dark earth, the petals of blossoms bowing in the wind.

I think about Sarnano and Charles Dickens’ A Christmas Carol. I recall one sentence. “I will live in the past, the present, and the future. The spirits of all three shall strive within me. I will not shut out the lessons that they teach.”