Lyudmyla Solomon: Ukrainians Will Not Give Up, They Want Democracy

Lyudmyla Solomon, a Ukrainian in Bolzano, tells us Ukraine will not give up. Even those who are refugees plan to return as soon as they can. 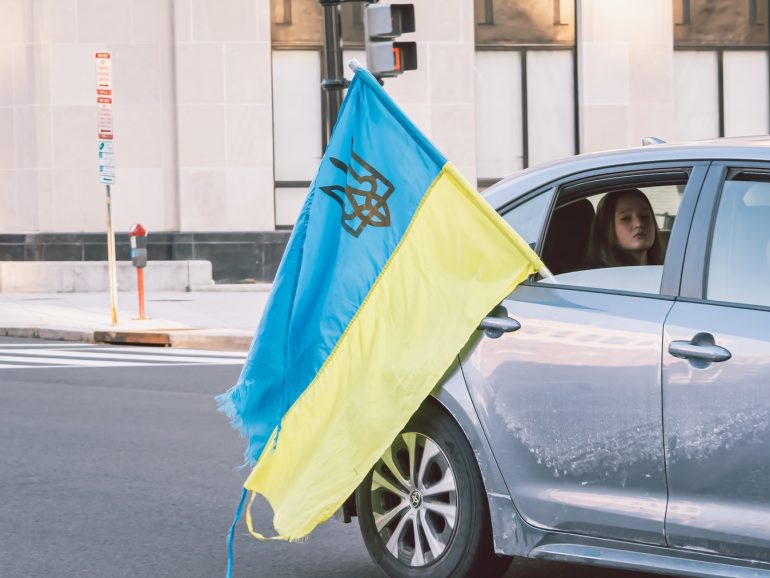 A Ukrainian flag waving from a car. Photo: Gayatri Malhotra on Unsplash.

So many people talk about war: the geopolitical and security experts, the historians, economists, and political scientists, the journalists, diplomats and politicians. But as Nanjala Nyabola reminds us, war “doesn’t happen to countries or strategies. War happens to people.”

So, laying down our various tools of analysis, it’s to the people that we should look. Not to see if they’re right or wrong, but to enrich our narrative about the subjectivities involved.

In this light, we spoke to Lyudmyla Solomon. Lyudmyla is a Ukrainian woman who has lived in Italy, in Bolzano, for many years, but for the last 6 years — after the war in Crimea — has been joined by her daughter and granddaughter. She works in many roles. For example, she is a financial consultant with Russian and Ukrainian clients, and she is the representative of the Council for Immigrants of the Municipality of Bolzano.

In recent days she has been very active in helping Ukrainian people seeking refuge in South Tyrol. She helps with translation and she is present at a stall set up in one of the city’s main squares for the collection of donations for Ukraine. Alongside the Consulta, she is also trying to activate projects to help with language assistance, school placements for children, and the development of free Italian courses for children. This she believes is essential:

“When my niece arrived here, speaking only Italian at home and making a huge effort, she began to understand within a month. Children learn fast but they need support.”

What are your contacts with Ukraine? Do your family members still live there?

My son is in Slovakia. In Ukraine there is my brother, who is in the military, and my dad who is ex-military. They don’t want to leave. My brother was retired, but now he has made a deal and has returned to fight. My dad on the other hand is at home in the western part of the country and is hosting six people from Kyiv that he doesn’t know.

When I tell him to at least ask these people for passports, he says, “but how could I even dare.” He has to help enough, it is a difficult situation to explain from the outside.

What do you think about this situation, about the war?

Russia will not stop for sure. Putin is like Hitler. He is a strange person and I don’t want to say bad words, but he is an unpredictable person. He is fixated on the idea that he wants to free the Ukrainian people from the Nazis. But what Nazis? They say that these Nazis put a lot of pressure on the Russians, but look…

I am Ukrainian, I always write on Facebook or Instagram in Russian and nobody tells me anything. I work with many Russians and nobody pressures me. Now I write more often in Ukrainian, to support my people but not because Ukrainians put pressure on Russian speakers. The rhetoric about liberation from the Nazis is a pretext: no one needs to be liberated.

And what will the Ukrainians do?

As far as Ukraine is concerned, I am convinced that they will never give up. If civilian, including young people, know how to make Molotov cocktails, then it’s clear that the defence is there.

The only problem for us is the sky. If they will help us to cover the sky — as we are continuing to ask — we can surely win this war. Because on the ground we can win it for sure: everyone here is fighting, those who are 80 years old and those who are young. And they will never leave their country. When I read that the men who leave their families at the border and come back are crying because they can’t escape, I don’t think it’s true. They cry because they are separated from their families but they want to go back and fight. Many people don’t want to understand this.

Often in Bolzano, in Piazza Municipio where, for two weeks now, I have been spending all day on my stall collecting material for Ukraine, every now and then people come up to me and say: “you have to give up, you have to stop, you’ll ruin everything!” People don’t understand that if we give up later it will be like a barracks: so many will be killed anyway because so many will want the freedom we have already bought. They want democracy.

Before, when I was little, we only had one hour of Ukrainian class in a week of school. One hour. Everything was in Russian. Now we have an hour or two of Russian, it’s different. Now we have regained our Ukrainian nationality and traditions, it’s hard for people to drop everything. They would rather become partisans. When we were in the Soviet Union, we all had passports that said we were Russians. That’s why this word, ‘Ukraine’, is in everyone’s heart and they will fight to the death. Nobody wants to give up.

As a financial advisor with clients who are also Russian, what is the feeling among Russian people about dealing with Ukrainians and the other way around?

None of the Russians with whom I have business contacts understand what is happening. However we don’t recognize each other just according to our country affiliation. There are Belarusians, Uzbeks and others, but we have always gotten along and we have always understood each other.

Tell me a little bit about the people who arrive, who they are, and what they need?

In the beginning, it was mostly people with relatives here that came. Later it was even those who had no connection to Bolzano at all. Most of those who arrive want to work to be able to pay their rent. But it is difficult to find a job without knowing how to speak the language, which today is the main need.

They want to go back; they don’t really think about staying. They didn’t even want to register officially because they were afraid of receiving 5 years of political asylum. They don’t want that. They want to go back to where their homes and families are. Obviously for those who have destroyed houses the situation is more difficult, but if you stay in Italy you don’t receive any help to rebuild. It is still all to be understood.

How is the reception system working?

People want to help a lot, but they are not united. Everyone tries to help in his own way.

It is logical that they have to register at the police station, but then these people are scattered around Bolzano. Instead, they should have a physical point of reference where they can talk to each other. They should have electronic devices like computers where they can study the language. What I think is that we need to follow these people every day for the first phase so that they learn the language first.

Thanks to Lyudmyla Solomon from everyone from Italics. If you would like to help to support refugees leaving Ukraine or those still in the country, please donate to the International Committee of the Red Cross.