Kremlin’s Propaganda And The Information War

Many independent broadcasters are either blocked or suspended as Kremlin propaganda escalates, but Russophobia is precisely what Italy and the West must avoid. 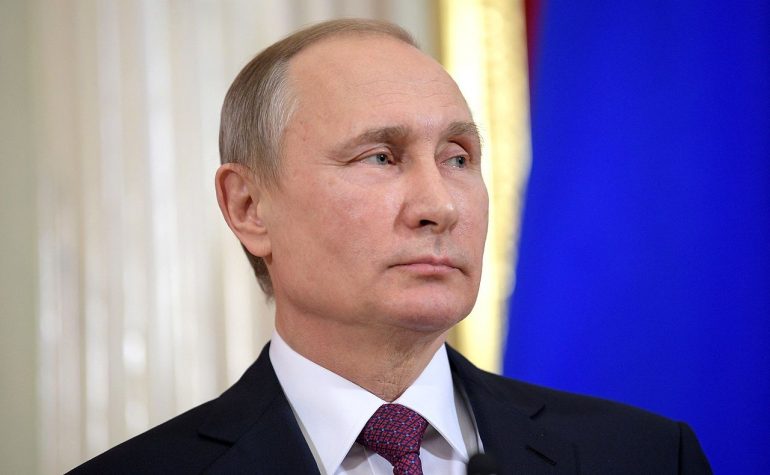 According to some outlets, when it comes to the Russian invasion into Ukraine, “Information warfare has been front and center in creating the pretext for this invasion and continues to be a major piece of the Kremlin operation.” This is our pretext to look closely at some steps that have been taken in the crucial first ten days of the escalating information war linked to the invasion, both from the Western and the Kremlin’s side. 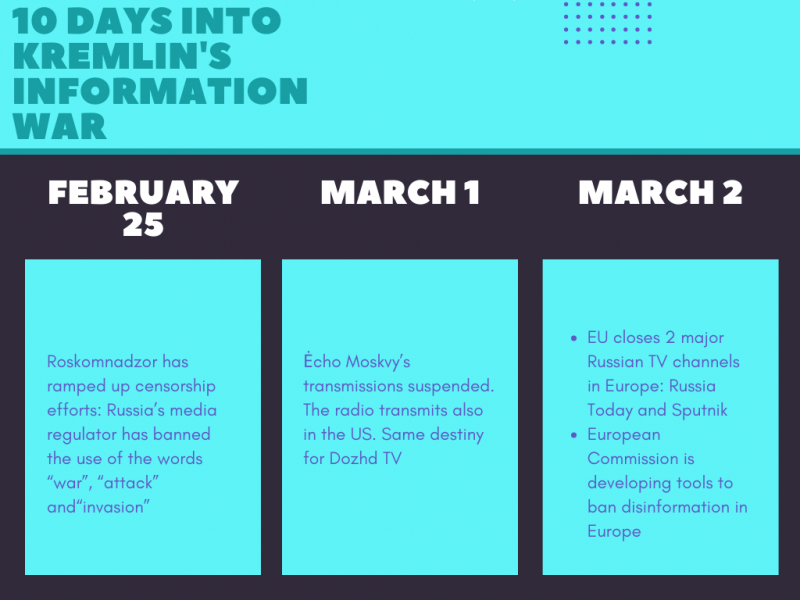 “Russia is defending Donbass from Ukrainian aggression” vs “Ukrainian is a democratic and peaceful country, the invasion of Ukraine is full scale”

“Denazification of Ukraine” vs “there is no Nazi propaganda in Ukraine” 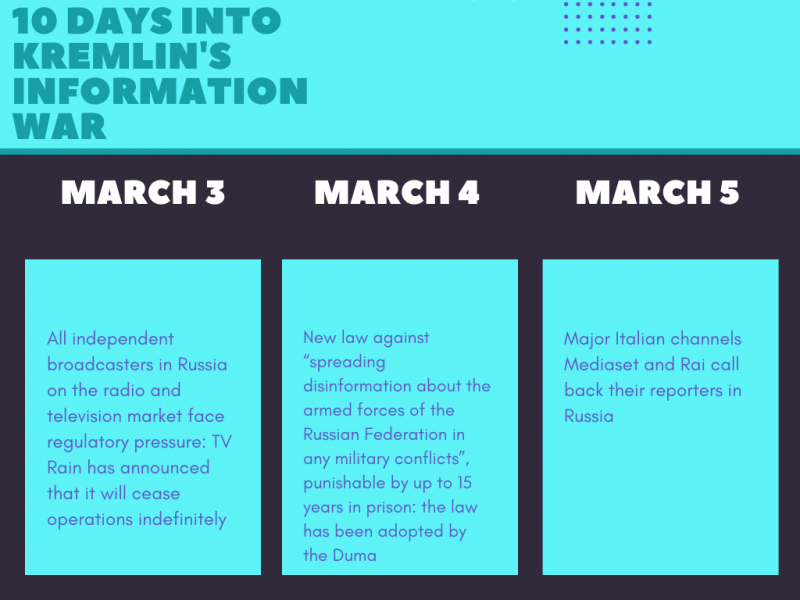 All independent broadcasters in Russia in the radio and television market face regulatory pressure until broadcast and websites bans for all of them, being the spiral of a dramatic escalation in an effort to silence critical voices amidst the country’s invasion of Ukraine.

One of Russia’s latest independent news channel, TV Rain, has announced that it will cease operations indefinitely after coming under pressure for its coverage of the war in Ukraine. Russia’s telecommunications regulator had already blocked TV Rain earlier this week, accusing it of “inciting extremism, abusing Russian citizens, causing a mass disruption of calm and public safety, and encouraging protests.” “No to war,” said Natalia Sindeyeva, one of the channel’s founders, as the staff walked out of the studio. The channel then began playing clips of Tchaikovsky’s Swan Lake in a version of the ballet that Soviet TV channels broadcast non-stop in 1991. 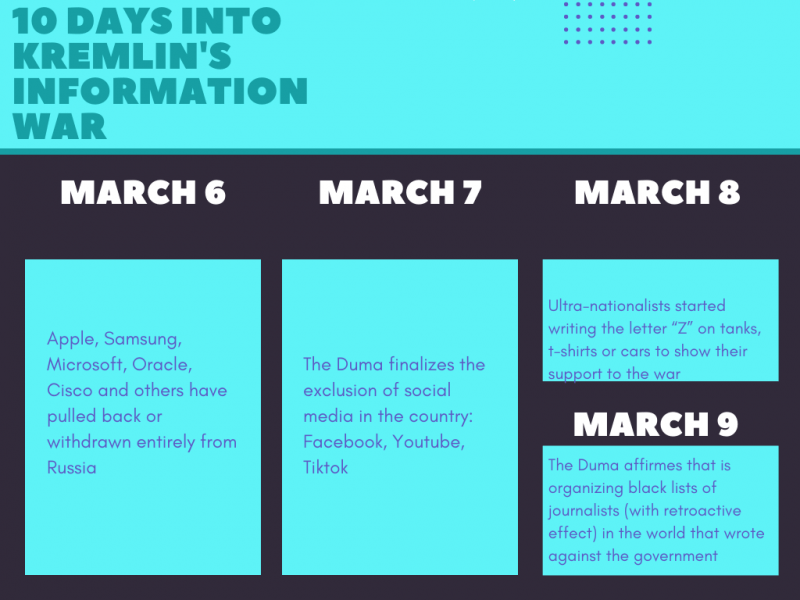 These events are just the outburst of the harsh reality that Russia has always been a great promulgator of controlled information. The system through which news are thoroughly controlled in Russia is particularly thorough and extensive. It’s not unusual to hear about journalists in prison or protests suppressed with violence. This kind of control comes from history and has very deep roots still today. As a proof, there has never been too much space for independent journalism in Russia, and Putin’s narrative has always followed a path of conservative attitude.

However, the way in which Putin is portrayed today in western media is misleading. The decision around the invasion was taken in advance by the whole Kremlin, bastion of a repressive system, and there is no crazy, irrational and unexpected behavior behind his recent and horrible actions, like how some media decided to portray the President. The NATO expansion was, according to some analysts, somehow doomed to have consequences, and our democracies maybe didn’t think it would go this far and harm all these civilians. Today Putin considers Russia a world power and he’s showing it to the global stage.

In this sense, it’s important to remind ourselves to look at history as a global intersection of consequences and actions, not as sealed boxes of events. That’s the reason why the narrative of events such as this one must always be pondered. Another interesting point regarding communication has been recently underlined by novelist Nicolai Lilin on Instagram when he pointed out how many Italian as well as Western media talk about Russians as if this war was asked and hoped for by the Russian society. People do not reflect — in whole or in part — the political power, and they don’t appreciate the image that comes out from this narrative, which may cause a background hate against Russians. Recently, in fact, we have seen many Russians were incarcerated because they protested against the war in Ukraine, displaying great courage fighting and speaking their mind knowing how harsh consequences are.

Russophobia is precisely what we must avoid, and the reason why communication theory is so important in times of conflicts. In communication and media, Europe is mostly answering with a very simplistic narrative: “We will not let Kremlin apologists pour their toxic lies justifying Putin’s war or sow the seeds of division in our Union.” This, as well as other types of affirmations, partially mirrors Kremlin’s narrative since 2014. The extremely brutal situation calls for it, as well as strong measures, though Europe should not use it to distance its people from the rest of the world. Depicting the enemy as evil is the basic answer to all human battles and nobody seems to be excluded.

However, as underlined before, the evil is not one person but a whole government, and more importantly neither is the nation that he runs. Putin is the face and fortress of a system and an alarming ideology. Russia is much bigger than the army, the Kremlin and the war. Russians want peace. This is why it’s so important to avoid stigmas and Russophobia. What we need to face is an age-old system that erupted on February 24, and the way to do it is to portray the situation as it is: political system, reasons, actors, ulterior motives, consequences, without slipping in catchy headlines lacking historical context, which may only whip readers up into hate and anger.

All countries, Italy included, can do their part in ensuring transparency and a fair narrative. Italian Prime Minister Draghi condemned the invasion and in particular said, “In the long run, this crisis reminds us of the importance of taking a truly strategic, long-term view when discussing new budgetary rules in Europe.” Strategic planning must be taken into consideration, nothing can be left untouched. If we can learn something from these two weeks is that our media should focus on how to avoid these escalations in the near and distant future, focusing on foresight, caution, and diplomacy.

All independent voices, together with the first civilians, were the first victims of this criminal war. Many Russian reporters, writers as well as businessmen, both Russians and foreigners with links with the western countries, had to leave Russia in order not to risk imprisonment. What can we expect next in this information war? The Kremlin could fully block independent journalists and officially declare them extremists or put them in prison. The aim of the Kremlin seems to be hanging digital curtains on information and putting off any source of non-governmental information, distancing Russia even more from the outside world. A return to the 80s? We hope not.