Love Between Sex And Caring

Is confusion between romance and nurturing an Italian thing? 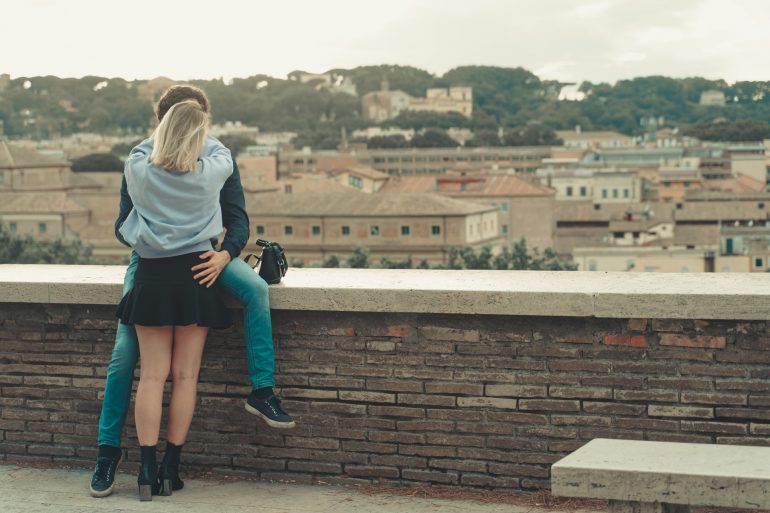 Many years ago — decades ago — I walked into a pub and ordered a beer. Behind the bar were a young brother and sister who were of Italian descent. They did not own the bar but they had recently been hired to serve as its tenders. The sister was very pretty and very sweet, too sweet I thought to have such a job, which no matter how you look at it, is kind of seedy. I have no idea what the brother looked like. In any case, at some point after giving me my pint of beer, she came up to me, and within the context of her job, asked me if I wanted something to eat. She did it in a kind of flirty way that made me uncomfortable and ever since then I have been gnawing on why that was. There was something recognizable about the way she did  it, something cultural that I immediately identified, and it did not mix well at all with everything else that was going on, not least of all that the food in this particular place was awful. What I think really bothered me about it though was that she was so sincere and respectful in her offer that she came off as being more nurturing than flirty, the latter of which I presume she was aiming for. But she was very young and I could tell that she did not feel comfortable in a pub, so she did her best to do her job the only way she knew how. I was not much older and I am just now starting to figure out what went on in that exchange. So here are some preliminary ideas.

Food, in the Italian context, is about family and history and culture and identity, and as such it is too serious of a thing to be mixed in with anything else, sex and romance included. In fact, I don’t see how the connection between sex and food is even made, for example, in the film Tom Jones, in which Tom Jones (Albert Finney) and Sophie Western (Susannah York) eat while lustily gazing at each other across the table. Nothing about it seems intuitive to me at all. Maybe it is an English thing or an 18th century thing, and that is fine, but nothing in the contemporary Italian cultural context, at least in my experience, supports or recommends such a pairing. There is no flirting at la tavola.

This got me to thinking about love as expressions of sex and caring in a broader cultural context, and about another film that I think sheds some light on the dynamic, the romantic comedy Girl on a Bicycle. As a film it is sometimes criticized as a silly play on European national stereotypes. Well, so are several plays by William Shakespeare and that does not make them bad pieces of theater. What I like about Girl on a Bicycle is that it is a useful source of European tropes: the irreverent but savvy Englishman, the frank but licentious Frenchman, the disciplined but naive German, and . . . the over promising but under performing Italian. There may be little or no sociological truth to these stereotypes, but they are nevertheless useful as narrative devices, as expressions of types that inform an array of dramatic characters.

The plot of the film draws on the theme of this piece: love between sex and caring, specifically the predicament that Paolo (an Italian tour guide in Paris played by Vincenzo Amato) must navigate when what starts as an instantaneous infatuation with a French woman Cécile (the girl on the bicycle played by Louise Monot) turns into a sexless dedication from which he cannot extract himself, given his Italianate desire to nurture this woman and her children with whom he has fallen in love. And the reason why the relationship is sexless is twofold: one, Paolo is engaged to be married to the German woman Greta (Nora Tschirner), and two, he hit Cécile with his bus, leaving her with a broken arm and leg. Despite these obstacles, he remains on the scene, as dedicated to Greta as ever but also ineluctably pulled into taking care of Cécile and her children. This is apparently an Italian thing. The Frenchman would not do it (he is too sexual). The German would not do it (she is too orderly). And the Englishman would not do it (he is too practical). Only the Italian would allow himself to get tangled up in such a problem. As the Frenchman (Francois, played by Stéphane Debac) explains to Greta: An Italian thinks fidelity is the name of the woman who lives across the hall. They cannot help it; it is genetic. Paolo is in fact Sicilian, a population that Leonardo Sciascia described as being paralyzed by their own imaginations.

What the film does nicely is to demonstrate that Paolo may indeed be unfaithful, in a sense, but it is not sex that motivates him but caring. He lies to Greta and goes behind her back not to have sex with Cécile but to take care of her and her two young kids. Paolo does not understand his affection for Cécile, he just acts on it impulsively and intuitively, privileging platonic love over romance, lies over truth, feeling over principle, and concern for others over concern for himself. One lie just leads to another, all driven by good intentions. Here’s one exchange:

Cécile: Why did you tell the nurse that you were my husband?

Paolo: Because I had to find out how you were; that’s it.

Paolo: Because I hit you with my bus!

I am not sure why these particular character traits are coded as Italian and I think if someone wanted to they could remake the film so that it was one of the other characters who plays the protagonist who bites off more than he can chew, and in trying to please everyone, ends up not pleasing anyone. But I have a hard time imagining the same film being as successful in any other configuration. The imaginative and impulsive Englishman? The impractical and disorderly German? The unprincipled and self sacrificing Frenchman? None of those characterizations strike a chord. All of these qualities map onto an Italian much better, at least a stereotypical one. Writer and director Jeremy Leven gets it right, at least within the current cultural matrix, based on stereotypes though it may be.

And it is precisely because of food, specifically the need to feed Cécile‘s two children, demonstrated in obligatory spaghetti scenes, that Paolo crosses the line into playing along with their false belief that he is their father. Paolo may be deceitful and lack courage, but he is loving and it is love — platonic and familial love — that causes him to sneak behind Greta’s back and lie to her. A desire to take care of Cécile and her children, not a desire to have sex with her, is what leads Paolo to transgress his relationship with Greta. Here’s another exchange, one that captures nicely the divide between romantic and platonic love that Paolo is trying to navigate:

Cécile: And you don’t even love me though you hit me with your bus!

Paolo: Look, if Italians loved everyone they hit in a traffic accident, they would have twice the population of China!

So maybe this is why my interaction with the bartender has occupied me off and on for so many years. There is a tension between platonic and romantic love and when one gets mixed up with the other, say when food is used in a form of flirting, cultural wires get crossed and feelings get tangled in a knot, one that can take a long time to undo.

Never say a romcom does not have profound philosophical insights to offer.