The War At Home: What The Ukraine Invasion Means For Italy’s Economy

The worldwide response to Russian aggression in Ukraine means that we’ll all be feeling the pinch. 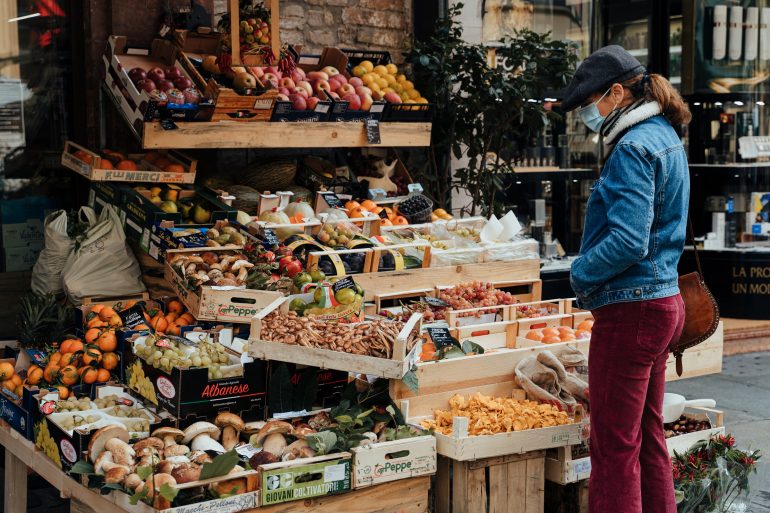 A woman stands in front of a market stall in Parma, Italy. Photo: Gabriella Clare Marino on Unsplash.

The Russian invasion and the war in Ukraine have dominated every news channel in Italy for the past two weeks. Talks of conflict and its human impact can now be heard across our dinner tables, classrooms, and streets; families, friends, and even strangers cannot help but comment on it. However as the economic implications of the conflict begin to unfold, we are starting to understand that the impact of the war is not limited to what is happening ‘over there’. The shocks of war have made their way here.

Economically, this conflict could not have come at a worse time. The material consequences of the pandemic are still affecting commerce and international trade, but now disruptions to supply chains are causing a drastic rise in prices, and the scarcity of fuel is creating an unsustainable situation for businesses and consumers alike. Indeed, even those of us who were lucky enough to make it through the last two years can hardly claim to be unaffected by the current economic instability. As we wait for the European Recovery Fund to find its way into people’s everyday lives, the low-income families who were already struggling to make ends meet before the invasion of Ukraine have now found themselves in an even more precarious situation.

The economy of everyday life

In the wake of the COVID-19 pandemic, Europe was faced with unprecedented levels of inflation. Coupling this with the staggering increase in fixed monthly expenses like energy bills, car fuel, and food have left many people unable to make ends meet. This combination has resulted in disruptions in almost every sector of the economy, with the food and energy sector particularly affected. Perhaps nothing better illustrates this link than the recent decision by Italian transport giant Trasportounito to suspend all of the movement of their trucks in the country not as a strike, but because they simply cannot afford to pay the fuel costs to put these goods on the road.

In the food sector, central sectors such as fisheries and livestock production have entered a moment of crisis. Given the rising price of fuel, it is no longer sustainable for fishing boats to set out in the open sea, causing a lack of availability of fresh fish and related products. Similarly, rising energy prices could lead to rising grain prices with consequences on primary goods such as bread, pasta, and dairy products, as Russia and Ukraine account for 28.9% of global wheat exports and 60% of sunflower oil. This will particularly affect the poorest sections of the Italian population, who often suffer from the highest relative expenses on heating, fuel, and primary goods.

For an average Italian family, this would mean spending an extra €1,200 per year on their basic necessities, without accounting for the cost of fuel. Indeed, the cost rising cost of fuel and energy will most likely lead to rising prices not only in primary goods but also in the third sector. According to ISTAT’s analysis, the goods most affected by this rise will be vegetable oils and their related products (+17.8%), fish (+6.9%), and pasta (+4.9%). On top of that, the growing price of fuel will affect sectors like public transport (+11.6%), hospitality (+5.4%), and postal services (+6.2%).

Because of its reliance on Russian energy, Italy is one of the most affected countries in Europe. As the socio-economic cost of supporting the EU’s collective sanctions on Russia continues to rise, Italian families are looking to Mario Draghi’s government for answers. Now, more than ever is the time to do whatever it takes to save the Italian economy.

Can the government go green in time?

There are a number of measures that could be taken to address these challenges. The first, widely discussed in both media and government circles, involves diversifying Italy’s energy supply sources. With 40% of the country’s gas imported from Russia, there is an urgent need to open new channels and avoid future crises. The potential for Italy to import its gas from North Africa and the eastern Mediterranean has been discussed in the past few weeks, but many advocate for a more radical solution. The EU Recovery Fund is one of the biggest opportunities to address structural weaknesses in Italy’s economy and reverse the consequences of a changing climate.  A shift towards renewable energy in the country could help to drastically reduce our dependence on foreign fossil fuels and lead the country towards a more sustainable future.

Sustained political support for sanctions on Russia will have to confront the realities of domestic economic hardship, and it will be fundamental for the government to support the hardest hit families and communities. This will mainly involve a fiscal policy aimed at supporting the most vulnerable groups, drawing on redistributive tools to prevent the further growth of socio-economic gaps in the country. There are already positive signs that the government is taking steps in this direction, with a budget of €5-7 billion being allocated to helping the most vulnerable families in the 2022 budget.

One thing is abundantly clear, in the wake of both a global pandemic and now a war. In an increasingly interconnected world, foreign policy decisions must take into account the effects they will have on the domestic population. If military spending continues to rise then there must be an equal amount of funding put into shoring up our defenses at home, to mitigate the effects of shortages, delays, and scarcity. Italy managed to emerge from the pandemic as the Country of the Year; let’s hope we manage to make it to the next one.