Operazione Ataman: When The Cossacks Came To Friuli

The Cossack occupation of north-east Italy in 1944, known as Operazione Ataman, has eerie parallels to our present geopolitical crisis. 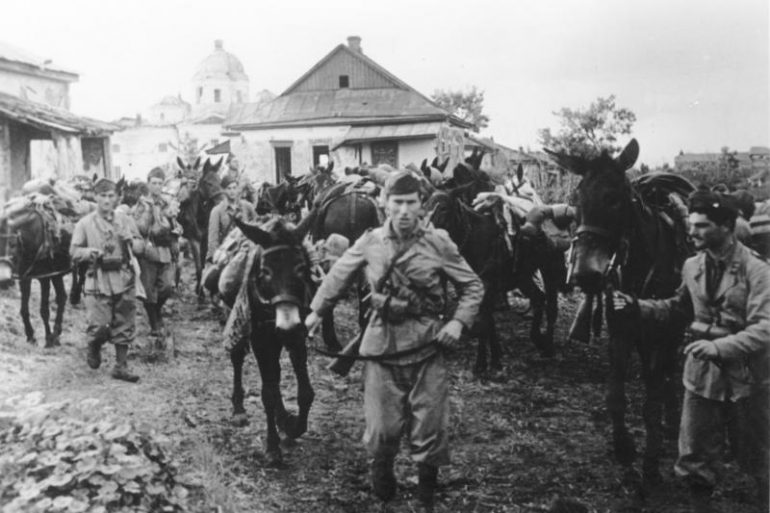 The winds of war are again blowing on the European continent. As Russia pushes further into Ukraine and NATO powers organize their response — or lack thereof — we are moved to reflect on past events with some notable parallels. One of these is a little discussed occupation that occurred during the waning months of World War II, known in Italy as Operazione Ataman. It is a bizarre and tragic narrative that seems only conceivable in the chaotic context of human relocation that is always churned up by armed conflict.

By the summer of 1944, the war was not going in Germany’s favor. The Allies had captured Rome, the Soviets were moving west, and a strong foothold had been established in France after the Normandy landings. Hitler’s Wehrmacht was losing strength daily across Europe, so any reinforcements were gladly welcomed. Behind the Gothic Line that snaked across the Apennines, the Germans and their Italian minions were faced with the growing inevitability of defeat. The partigiani were intensifying their attacks, especially in places like Carnia, in the mountainous region of Friuli Venezia Giulia. As a means of allocating their most valuable troops to critical areas, German leaders decided to import a horde of fierce Cossack warriors to tend to the largely Communist resistance fighters.

This strategic decision dated back to November 1943, when NSDAP Office of Foreign Affairs Minister Alfred Rosenberg and Oberkommando der Wehrmacht Wilhelm Keitel decided to promise territory to the Cossacks fighting against the Soviet Union in exchange for their loyalty. At the Anti-Bolshevik Bloc of Nations conference, Rosenberg stressed the importance of a “platform of joint revolutionary struggle against Russian communism,” which thousands of targeted ethnic groups like the Cossacks had passionately joined. Hailing from the Volga, the Kuban, and the Terek areas of the Soviet Union, the Cossacks had been incorporated by the Germans into various divisions of the Wehrmacht, primarily as cavalry units. They had proven to be steadfast mercenaries, and thus were selected to be transferred to Italy to bolster the efforts against the grassroots guerilla movement.

In July 1944, the Cossacks crossed into Friuli Venezia Giulia. They numbered around 22,000, but the group was not solely military men. There were 6,000 elderly family members, 4,000 relatives, 3,000 children, and various other acquaintances. While the friulani may have been numbed by years of occupation by the Germans, it must have been astonishing nonetheless to see thousands of ferocious, bearded men wearing papakhas and carrying sabers ride into their remote mountain villages. Besides their thousands of horses, the Cossacks brought a few dozen camels with them, surely the first time in history two-humped ungulates made an appearance in the region. In any case, the Cossacks left a memorable impression on the spectators they passed along the way. Giuseppe Nogara, the archbishop of Udine, wrote in a letter to his superiors, “They are the scourge of God. Where they pass it is as if a swarm of locusts has passed; where they camp everything is literally plundered.” The local Italians did suffer significantly as the Cossacks settled in, forcing them out of their homes and engaging in rape and plunder as they saw fit.

Reined in under the command of their ataman Pyotr Krasnov, the Cossacks efficiently cleared the area of the partisan threat within three months and set about establishing their new domain of Kosankenland. Towns like Alesso, Trasaghis, and Cavazzo Carnico were renamed Novočerkassk, Novorossijsk, and Krasnodar, and the Cossack leadership utilized Verzegnis and Tolmezzo as their bases of government. As the Cossacks consisted of several ethnic groups with different traditions and religious practices, they divided their territory between Muslims in the north and Orthodox Christians in the south, installing both imams and priests in local churches. Perhaps in another timeline the Cossacks would have established deep roots and made Friuli their home, but time was running short. Operation Grapeshot resulted in the liberation of all of northern Italy by early May 1945, with the Germans officially surrendering on May 2. The Cossacks had begun to flee northward as the Allies advanced, retreating towards Austria via the Plöcken Pass. Their attempt at escape only lasted a few days, ending when they surrendered to British troops near the town of Lienz in the Austrian state of Tyrol.

Had the British been honorable and decided to make an effort to look out for the best interests of the Cossacks, our story might have had a happier ending. Yet in one of the war’s many instances of heartless betrayal, the Brits decided that the best course of action was to hand the Cossacks over, into Josef Stalin’s eager hands. They were almost immediately deported to gulags in Siberia or executed and buried in mass graves. Out of the 22,000 that had been in Friuli, less than half survived and those who managed to escape were widely dispersed across Europe.

So what does this all mean for us 77 years later with bombs falling and missiles flying in Kiev? Well, the endgame of the current conflict is still uncertain, but a few things are guaranteed. Millions of Ukrainians will be displaced for months or years to come, regardless of who remains standing when the dust settles. Some of these Ukrainians will undoubtedly find their way to Italy and may decide to make it their adoptive country. If Ukraine ends up being absorbed by Russia, there will be little motivation for her refugees to ever return, faced with the likelihood of few opportunities and certain maltreatment.

We should all hope for a peaceful resolution to the ongoing crisis, but when we examine past events like Operazione Ataman, a healthy dose of cynicism is needed. Hopefully no one will meet the fate of the Cossacks, but it is a grand illusion to believe it cannot happen again.