Three On A Plane (A Christmas Carol)

On a plane, in the row ahead of me, a man was speaking to another two or three ahead of him. I picked up words that pulled me back 50 years. 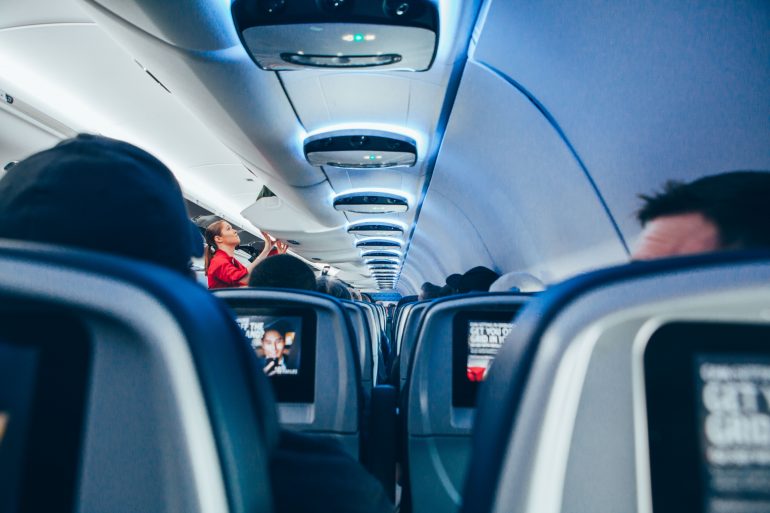 A few years ago, I boarded an Airbus 320 from Rome to Frankfurt as the first portion of a flight back to Montreal and the United States. I booked a spot on the bus from Macerata in the province of Le Marche, climbing up the aluminum steps at 0100 to arrive at Fumicino in time for a cappucino and a pastry. I had been up 45 hours, cleaning and packing, leaving my apartment in the town of Sarnano that was built brick by quarried brick, nearly a thousand years before. I slept a good part of the trip, waking on the high bridged superstrada at 120 kilometers an hour, across the mountains that had seen roman legions marching 2,000 years ago on sunny dry stony ground.

This is an Italian story because it takes place on an Italian flagged aircraft from Rome to Frankfurt. It is also an American story, because the three participants are Americans of a certain age and physical breakdown.

It is a war story, which is always self edited and partially true. It is the memory of a war story, even more elusive; thick, rich and reduced like slow simmered soup stock. Beware of opening the memory blend, mixed in unequal measure of guilt, fury, pleasure and regret.

The plane was almost full. Each row had three seats on a side, squeezed and cramped, locked upright. There was an occasional open place, scattered and random like the lives of orphans. After pushback and the taxi to the takeoff runway, the passengers settled in for the two hour flight. A few folded their blankets and leaned against the vibrating fuselage. Others looked around, recognizing English with regional accents from Appalacia or Queens. Some had been anxious to leave Italy but most were hesitant to leave the sunshine, the soft Italian language and good wine.

After departure and the climb to cruising altitude, people relaxed. There were a number of Americans on board. You could identify them from the way they overfilled their armrests and the size and cadence of their voices.

It had been busy days preparing to leave Italy. I was tired, unhappy to leave a country at peace, a country with less discordance than my destination. I was reluctant to be on the way back to the world, a country that I had felt uncomfortable in for years. I knew I would begin the transition to asking the size of my neighbors pickup, and express surprise at the thickness of my diner cheeseburger dripping with hot fat and pieces of molten cheese burning my fingers, a hill of french fries and a river of ketchup. I had concerns.

In the row ahead of me a man was speaking to another two or three ahead of him. I could see thinning hair, broad shoulders and loose neck skin. I did not hear the start of the conversation over the drone of the jet engines. I picked up words that pulled me back 50 years. I heard the names of towns, cities, ports and fire bases. I was back in war, one of several I had participated in and sometimes enjoyed. I pulled the thin gray blanket tight around me. I tried to shut out the names but began mentally to recite places that came from somewhere behind my closed eyes and sounded poetic from 10,000 kilometers and a lifetime away. Hamburger Hill, Tet, Hue, Khe Sanh, Ia Drang. None of which I had attended, but known and embedded, impossible to dislodge, the lyrics of a teenagers song.

I wonder now, shall a person live a thousand years, will the images of corpses and bright green jungle, blue water and dozer cut landing strips, the smell and sound of battle and silence, the barren and ruined land where bombs and Agent Orange had leveled and marked the hills, be forgotten? Will the heat and the sound of mosquitos, the electric feel of a single leaf falling on skin, the dread and anticipation of an ambush fade when my body decays and the nerve connections break. The exhilaration and the controlled fear, the stroking of my weapon, the way eyes search the tree line, will that be erased? In the time of dementia, is this the sound track that loops endlessly through me?

The two men ahead spoke of a northern fire base near the DMZ, Dong Ha. I had been there on C-130’s, carrying supplies in and bodies out. Though I was not technically a combatant, a visitor.

They spoke and I listened, absorbed. They had not known each other before Rome. Their biographies were in the compressed shorthand of travelers, the code of an exclusive club. The men searched and connected history, marking the years, seasons of rain, unbearable temperatures and humidity, moments of importance and insignificance, tying them together. Both had the restraint of not sharing for the listeners who would be offended.

One of the men had come to Rome on a religious pilgrimage. He went to the Vatican from the four star hotel with an American breakfast and looked up at the balcony for the pope to appear. He wanted to be blessed before noon with opened arms under loudspeakers, the invocation of G-d’s representative on earth. He waited for absolution but had come for confession.

The other had been on a tour with his wife, seeing art and sculptures that stood above them in the squares, looking for movement and eternity in frozen faces. He saw heaven in marble and in the shadows on canvas in the long gallery hallways.

I had been living in a rural hilltown, embracing the centuries in the historic center, trying to wash away the past and dilute the years. One friend told me I was atoning for evil done or imagined. There was never an appropriate response.

The two men spoke ellipically of skirmishes and battles, wounds, physical and mental; stones in the boots of time. I felt pride in understanding and amazement at the decades disappeared; pushed off my blanket and leaned forward between the seats and said to the man in front of me, “I was there.”

The man asked where, and I replied, “along the trail.” He turned and grinned in a minor key, did not ask for details, satisfied when he looked into my eyes. He mentioned his unit and MOs. The other man did as well. Bona fides and truth. The anecdotes were snapshots of humor and fear in high contrast black and white with perfect focus. There were no details of agonies; those had been papered over and dark varnished. This went on for 15 minutes and we stopped talking. There was relief in the sharing and in the finish.

The plane descended, landed, rolled to the stop. We rose, walked off in the section order announced by the crew. We may have bowed or tripped on the aircraft’s door sill, dipping our heads to each other, I don’t recall.

One of the things I learned as a young man in Vietnam was that men die alone, lingering or instantly with a 75 pound pack. On the plane I was reminded that we live alone, briefly touching each other in the jungles of Vietnam, the piazzas of Rome, the closeness of a hilltown named Sarnano, or the confinement of an aluminum tube with a national flag on the tail. We shared a cappucino in different cafes. Italy had brought us together for a short time that might be remembered. Mostly likely not. There was no lesson to be imparted to children or strangers other than the beauty of Italy and the taste of gelato. Who remembers the legionaires and their weight of arms in the hot sun?

I thought we were fortunate to have shared those two hours. It was the night before Christmas and the the lights were up, trees surrounded with gifts and families anxious. We walked, I’m thinking, stiff, slightly stooped and unsteady, away from the plane. We were all on our way to somewhere else.