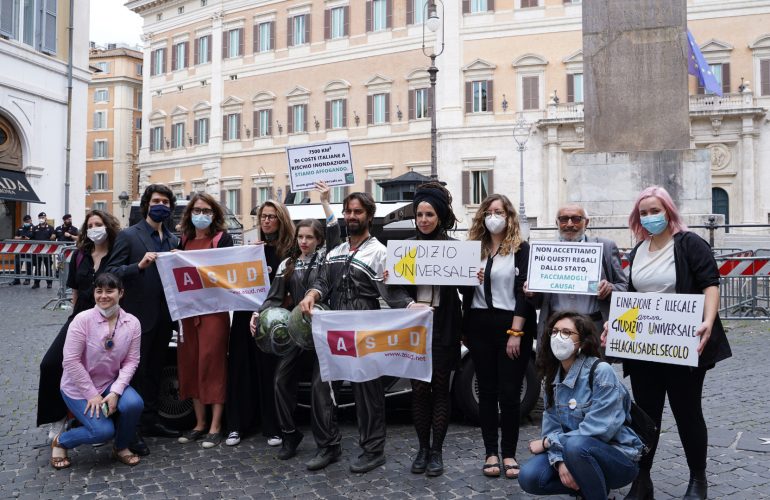 Universal Judgement protest in Rome. Photo courtesy of A Sud.

Each of us are responsible for our own actions, which sometimes reverberate in time and space. Every single gesture or decision has a precise, albeit unpredictable, consequence. Omissions also follow the same logical rule, as do actions with predictable, indeed, certain consequences. Science has long warned us about the extent to which certain human behaviors are destroying the environment, in all its ecosystems. In recent times, civil society has been demonstrating that a change, of course, is necessary. A Sud’s Universal Last Judgement campaign aims to bring change to the forefront of political matters by accusing the Italian government of climate inaction.

Italian law is also aligning itself with these positions, which are not based on moral or ideological assumptions, but on scientific data and national and international legal obligations. The parameters for judging the liability of individuals, states and entities are based on two elements: knowledge, or foreseeability, and material conduct. Obviously, depending on the charges brought and the type of person against whom they are brought, these parameters change. More importantly, can this reasoning be applied to the responsibility of states for not implementing adequate policies against climate change?

A growing trend in the world argues that it is possible, especially through recourse to the courts. Is it possible that the Italian State, being aware of climate change and possessing the financial and political capacity, could be exonerated from its responsibility for failing to take adequate measures to combat the phenomenon?

It is in our eyes that some people’s decisions are more effective than others’ positions. But the big question is, is doing nothing like doing something? In legal terms, is passive conduct in an offense comparable to active conduct? This is a question that has reverberated in international law for decades. From the Nuremberg Tribunal that judged Nazi crimes to the more recent Tribunal for the former Yugoslavia, judges have affirmed state responsibility for violations of international law in their territories.

The Universal Judgement started on June 5, 2021, on the initiative of A Sud NGO, which brought together more than 200 plaintiffs claiming violation of fundamental rights recognized by the Constitution.

In the wake of the well-known climate litigation taking place in many EU countries, Italians claim the responsibility of the State that took no action to fight or to slow down the climate change. Marica di Pierri, director of the Environmental Conflicts Documentation Centre, a doctoral student in Human Rights and spokesperson for the association A Sud, affirms, “The legal premise on which Universal Judgement is based is that shared scientific findings bind states and constitute a yardstick for their conduct, both internationally and nationally. Rethinking Climate was honored to be able to interview the project manager following A Sud’s campaign trial against the Italian government.

The main climate obligations that the State has to observe derive from international, regional, and national sources, including international climate agreements, international and regional human rights sources, European Union sources, the Italian Constitution — with particular reference to Articles 2 and 32 — and other national sources, including Articles 2043 and 2051 of our Civil Code. The request made to the judge is to declare that the Italian State is responsible for failing to combat the climate emergency and to condemn it to achieve a drastic reduction in greenhouse gas emissions by 2030. This in order to meet the Paris Climate Agreement’s objective of limiting global warming to a maximum of 1.5°C and in any case well below 2°C by the end of the century.

In Germany, this kind of legal action has had an incisive effect on the environmental policies adopted by the federal government, and the Italian claimants hope the same in our country. France was condemned for climate liability after the campaign L’Affaire du Siècle promoted by civil society. The court sentenced that the State has not taken sufficient action against climate change and failure on defending human rights and collective interest in a healthy environment.

The right to life

The right to life and the right to health is endangered by worsening weather conditions, due in part to the criminal inertia of the Italian State. The right to a ‘stable and safe’ climate is also mentioned as a precondition for the enjoyment of the above rights, characterized by stability of the atmospheric system, the safety of anthropogenic processes, and ecosystem compatibility of human actions.

Prof. Michele Carducci, Professor of Comparative and Climate Constitutional Law at Unisalento, UN Human Rights Defender and Earth Protector for the Rights of Nature and Climate Justice, amicus curiae for Giudizio Universale, states: “The climate change that is taking place, and the global warming that is causing it, is a process of instability of the whole climate system, which is composed of the atmosphere, hydrosphere, cryosphere, pedosphere, lithosphere and biosphere: the whole system has become unstable. Rising sea levels, melting glaciers, extreme weather events show us that the emergency is no longer a question of the environment as a particular place in itself.”

This legal action is the instrument that will apparently succeed in resolving and pushing politicians to take incisive decisions on this matter, which are too often slowed down by social and economic issues.

Recently, on February 8, the protection of the environment and animals was upgraded to constitutional status, as Articles 9 and 41 of the Constitution were amended. Although Minister Cingolani and many other politicians applauded this change, the road to effective protection of ecosystems is a long way off. We anxiously await the application of these new principles which, without the necessary stance, will remain purely abstract ideals. A good first step, for example, would be to invest in renewable energy sources, introduce crimes against flora and fauna, and to build a body of secondary legislation appropriate to these lofty principles.

While waiting for the political class to take a decisive stance on this issue, citizens have organized themselves to legally oblige them to at least respect their international commitments. The Last Judgment has begun, let us hope that the sentence does not lead to a disastrous end for the Earth.