Asiago: A Town Crazy About Hockey

Securing a new league title, Asiago Hockey keeps the magic of a century-old tradition alive. Asiago and its inhabitants continue to dream. 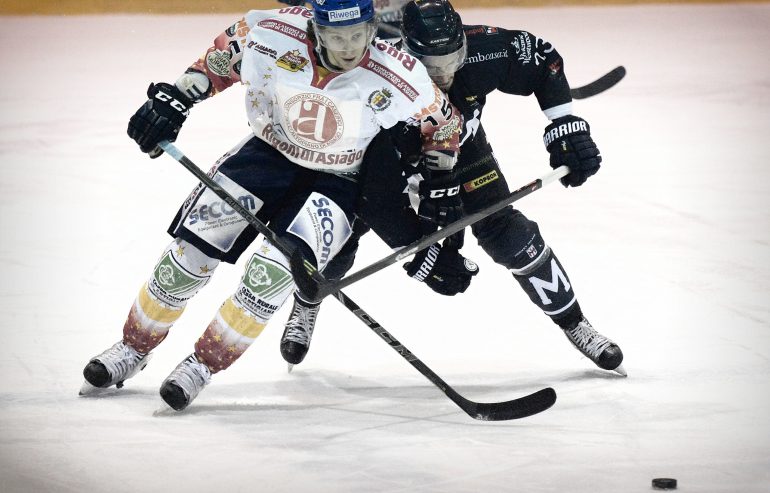 In the province of Vicenza, a minor township stands on the hills, separating the two Italian regions of Veneto and Trentino-Alto Adige. It is Asiago, known for its famous cheese and its fabulous ski resorts. Here, the colors are those of nature: green, brown, grey, and blue. The fragrances are those of the woodlands. Time passes slowly, far from the hectic pace of big cities.

But when it is match-day, the small quiet town is transformed. The colors get redder and yellower, the sounds are those of the blades on ice and of affectionate fans that support their team. Asiago is also a land of hockey, and in this land, the Asiago Hockey team reigns.

A few days ago, the Asiago hockey team secured its third league title, keeping the magic of a century-old tradition alive. Asiago and its inhabitants continue to dream.

A fairy tail lasting more than a century

The story of the Asiago Hockey might be narrated as a tale.

Once upon a time, in a remote area of the great Asiago plateau, a group of smiling, curious, and playful young people were discovering new entertainment on the edge of shiny mountain lakes. With blades strapped to their boots, the boys gradually discovered the pleasure of moving on ice.

Yet actually, ice skating finds its roots a long way back in time. Dutch paintings of the 17th century already depicted women and men wearing a primal form of ice skates, gliding gracefully on the frozen waters of a river. Some primordial forms of ice skating are even dated as early as 1000 BCE.

But for those young people of Asiago that were discovering that old human behavior, it was a new activity. And it was a short step to realize how to make that activity even more exciting. They grabbed some rudimentary wooden sticks, and they started to hit balls or pucks. Hockey was in town.

Ice hockey was already diffused in North America, Canada, and England by the mid-late 19th century, and it was first practiced at a professional level in 1902 with the Pennsylvania Hockey League. However, Asiago had to wait until 1935 to see its local, semi-professional team on the ice.

Now, many years have passed and skating on ponds and the rudimentary equipment have given way to a professional and winning hockey team. In 1968 the team was promoted to the leading series of the Italian hockey tournament. In the season 2000/2001, they won their first title.

To date, the seeds sown on the ice sheets of those mountain lakes by the first hockey players from Asiago have yielded 8 championships, 3 Italian Cups, 5 Super Cups, and one Alps Hockey League Cup.

Of course, the city, together with its inhabitants, cannot but be part of this story of successes. Following the words of Alex Frei, who played for Asiago Hockey, “I really understood that Asiago is a city that is crazy about hockey, where everyone supports the team.” The fans are an integral part of the team’s sensational adventure to success.

But ice hockey is not the only sporting virtue of the area. Asiago also hosts an inline hockey team — a variant of ice hockey played on a hard, smooth surface — that plays in the major Italian League that to date has won 22 titles, including three European championships. Hockey is really in the veins of the asiaghesi.

But the relationship with the rollers and ice does not ends here. In fact, Asiago is the home of some of the greatest speed ice skating champions, such as Enrico Fabris, who made Italians dream at the 2006 Winter Olympics in Turin, and Nicola Tumolero, bronze medalist in Pyeongchang in 2018 and European champion in the same year.

It is a matter of fact: football is the national sport in Italy. Almost everyone in the country supports a team and most children grow up kicking whatever rolls. It’s not difficult to see children in the inner garden, or in the corridors of any Italian school playing football with balls made from plastic bottles, fruit juices, and tinfoil.

But Italians are discovering, and rediscovering, new sports and activities — just like hockey. We have learned it with the recent Super Bowl, for which the statistics show a constant increase in the views also in the ‘Belpaese’. But also with the most recent victories at the Winter Olympic Games in Beijing, where curling unexpectedly appeared on the radar of Italian sports fans, rewarding years of commitment and discovery started in the country after the Olympic Games in 2006.

Piece by piece Italians are embracing new interests and passions, looking to be the next success story just as Asiago Hockey has been for its town and its inhabitants.