Why Should We Talk About Environmental Migrants In Italy?

Italy needs to change the narrative about migratory phenomena, and understand that environmental migrants are the result of our unequal economic and political systems. 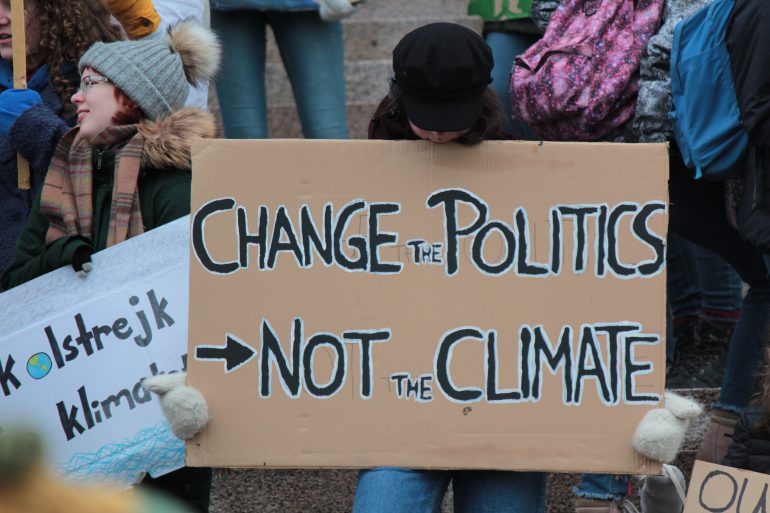 A sign at the Fridays for Future climate strike at the Helsinki Parliament, April 2019. Photo: Tania Malréchauffé on Unsplash.

The answers are mainly to be found in some very eloquent data. The World Bank estimates that if improvements in development paths or more environmentally sustainable policies are not adopted soon, by 2050 — in less than 30 years — there will be 143 million migrants linked to climate change. The UN is instead even more pessimistic and predicts the displacement of 250 million people by that time.

The countries most affected would be the Pacific islands, Bangladesh, but also many African countries, especially those in the Sahel area. These are countries that contribute less to the production of CO2, and therefore to climate change, but are more affected by it.

In 2021, the Statistical Dossier on Immigration listed the climate emergency as the main driver of global forced mobility during 2020. When interviewed by the Guardian in 2008, Antonio Guterres stated that climate change is “one of the main reasons of forced displacement because of its impact on the environment as well as on poverty and conflicts.”

As for Italy, there are very few researchers that have studied the impact of climate change on migration to our country. Indeed, studies on this issue are fragmented and insufficient, and for this reason it is essential to talk about it. What we do know we owe to very important research conducted by Antonello Pasini, one of the greatest experts on the subject, and published in the magazine Environmental Research Communications. Here it is stated that weather-climatic variations are essential in influencing migratory processes, in particular it is the increase in temperature to be decisive “so much so as to suggest that exceeding a threshold of heat tolerance, human and animal, may have a primary role on the variations of migratory flows.” Given that according to experts of the Intergovernmental Panel on Climate Change (IPCC) the world temperature will constantly increase until the end of the century, these results are very important.

More than anything else, however, this research is of interest because, according to Legambiente, almost 38% of the nationalities declared by migrants arriving by sea in Italy in the last four years are from the Sahel area; and if we add other countries such as Ivory Coast, Guinea, Bangladesh and Pakistan, where the environmental situation is also declining, the percentage rises to 68%.

To sum up, environmental migration is a phenomenon already underway which undoubtedly also involves Italy and its political capacity to interpret and face the challenges of the near future.

It is surely not easy to draw a casual and direct nexus between climate change and forced migration, as migration drivers may be several and therefore interrelated. What can be argued is that climate change is responsible in negatively and directly influencing the hazardousness of places and in indirectly changing livelihoods. In fact, rapid-onset extreme environmental events such as tsunami, landslides, earthquakes or flood as well as slow-onset environmental degrading developments — which lead to droughts and land degradation — render the life of a great number of people intolerable, leaving them no alternative than to flee. In this regard, it is also important to highlight the fact that extreme climate change related disasters and environmental deterioration might in turn trigger violence and conflicts over resources and, therefore, induce migration.

In other words, CO2 emissions have triggered a set of dangerous phenomena, which eventually will have an extreme impact on the livelihood of people due to the devastating consequences on agriculture and the infrastructures. Consequently, climate change-related refugees and migrants can be of three groups: first, people who flee from rapid-onset extreme environmental events — natural hazards or man-made environmental accidents — but who go back to their home once the area has been rehabilitated; the second, refugees who have been forced to flee because of “permanent environmental change” due to natural disasters or disasters related to development projects; and third, people who are temporarily or permanently displaced because they cannot be sustained by the resources of their lands due to environmental degradation.

The main problem is represented by the fact that, notwithstanding the extent of the problem, there is no international legal framework that protect environmental migrants’ rights. Indeed, for example, the 1951 Geneva Convention, which grant Refugee Status to people “persecuted for reasons of race, religion, nationality, membership of a particular social group or political opinion” do not protect people from environmental disasters or the lack of natural resources making these migrants very vulnerable by lack of access to fundamental rights and legal status.

In general, therefore, from the point of view of international law, environmental migrants are an almost non-existent category. People who migrate for environmental reasons or flee from extreme weather events are now ghosts and are presented as economic migrants — the treatment reserved for them is at the discretion of nation states and to the different sensitivities of governments that follow one another. In Italy, for example, with Salvini’s security decrees and the cancellation of humanitarian protection, these people had very little chance of being granted any legal status. The only possibility was that of a six-month residence permit in the case of a contingent and exceptional disaster situation that could not be converted into a work permit.

In 2020, with the change of governmental alliances, the recognition of the residence permit for disasters was introduced which, unlike before, is no longer linked to an ‘exceptional and contingent’ disaster situation, but only to the seriousness of the disaster situation in the country of origin. Moreover, with this law, this permit is convertible into a permit for work reasons, giving environmental migrants who have found employment the possibility to settle in the country.

Another important precedent is that of Milon, a Bangladeshi man who was granted humanitarian protection thanks to decision 5022 of the Court of Cassation of March 9, 2021. In this situation, the Court, referring to a principle already sanctioned by the UN, states that the request for humanitarian protection can be accepted in case there are no policies in the country of origin that fight against pollution and mitigation of climate change. In the case of Milon, the disastrous climatic situation of the country of origin had been determined by the conduct of government authorities to be due to the industrial shrimp farming, the occupation of the territory with expanses of aquaculture tanks and the policy of deforestation.

The Italian narrative on environmental migration

In addition to the legislative issue, the fact remains that in Italy environmental migrants are either not talked about at all, or are talked about in alarmist and very unscientific terms. In 2018, Salvini ridiculed the recognition by European Parliament of climate change as a migratory driver by saying: “What is the climate migrant? Where does he go? If one is cold in winter and hot in summer migrates? Let’s be serious. We have so many already. Is the climate migrant also someone from Milan who doesn’t like the fog?”

In general, it can be said that in Italy the narrative on migration struggles to consider it as a global phenomenon, and focuses much more on arrivals. It is difficult to discuss why people move and what are the dynamics behind the choice, and very often the forcing, to migrate. From this point of view, arrivals are the last phase of a process whose causes are to be found in our economic and political system that exploits the poorest parts of the planet to increase its wealth. Talking about environmental migrants would be useful to open the interpretative horizon and understand, also in a future perspective, where and why people will arrive if we don’t do something to reverse the course of climate change.