Alessandra Amoroso creates the complex of feelings for which Italian music is so renowned. 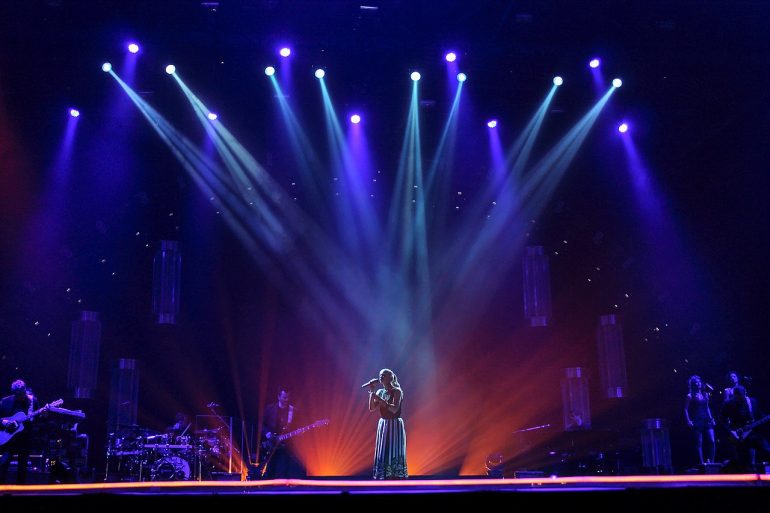 I once spent a month in a small lodging on top of a hill in a small town in Basilicata. I say small lodging because it was a building with just a few units but the apartment itself was huge, and newly renovated, one of the many benefits of life on the outer margins of Italy. It was run by a young man and we were the only two people living in the place until a couple of employees came to work in the area installing pale eoliche — wind turbines — a technology that finds its home in exactly the kind of place that Basilicata is, wide open and windy, or at least this part of it.

As my alarm clock each morning I had Prenditi cura di me by Alessandra Amoroso, played at top volume on an impressively powerful system by il padrone di casa. It must have been a favorite of his because he played it every morning and I don’t think he ever played any other song, at least not at that time of day or whenever else I was around. It wasn’t long before it became my favorite song too. I really had no choice but to like it, but in this case I was fortunate because I found it to be an excellent song and one that I have revisited frequently over the years since I was first introduced to it.

I want to dedicate this piece to understanding why the song has found a permanent place in my heart, but with the caveat that I am not trained in music or musicology, so you should not expect any expert insights. I will simply work with what I know and say what I can, hoping that some of you who know more about music will be able to enhance my meager scribblings with comments in the space below. I won’t say anything personal about Alessandra Amoroso for the same humility other than to say that she has been likened to Mina, who was known as the Queen of Screamers, due to the power of her voice, which has also been categorized as ‘black’, a comment that I will leave alone for the moment, like any sensible American. I also will not say anything about the duo who wrote and composed the song, Federica Frantoni and Daniele Coro, who certainly deserve credit also. Perhaps at a later date and after a suitable amount of study, I will be able to say more about all three of these creative talents.

What strikes me most about the song is its phrasing. As with the performances of many pop divas — Mina and Milva let’s say — the music that backs Amoroso’s singing is relatively simple in terms of its instrumentation, although excellently composed and performed, with a strong and energetic melody but without an overly complicated arrangement. Amoroso delivers most of the first nine lines with a slight break in the middle, a technique that builds quite a bit of tension in the first minute or so of the song, setting the stage for the first break that occurs in line ten, when the melody fades and the baseline takes over.

In this refrain, which begins with the title phrase, Amoroso moves the energy from say a four to a six over the next three lines. It seems to be a perfect resolution, or partial resolution, of the tension that she builds in the first nine lines, shifting into a more syncopated rhythm, something that Mina was also known for, hence the comparison. Frank Sinatra was among the first of modern singers to use the technique to great effect, always with a resulting increase in pace and force within the song.

It is in line thirteen, however, that Amoroso really lets loose, say upping the energy from six to eight. And once she hits eight she sits there for the next six lines, using her powerful voice to control the pace throughout the stanza, falling back onto her earlier technique of breaking the lines in two with just the slightest pause while also hitting accents within words with stunning precision and emotion.

On line nineteen she falls back and puts the smoke back into her voice, delivering the words with a steady and almost breathless projection, seemingly always verging towards collapse, but because her voice is so strong it never quite sinks below a three or so. But a new vulnerability and desperation is definitely there, one that was not present in the song up until this point.

What’s interesting in line twenty five is that she picks up the pace again but retains the smokiness. We are relaxing again, but the tension starts to build instantly, and it is a hybrid energy, one that blends the previous vulnerability with a new toughness and wisdom. Her syllables are longer now, her Rs more strongly trilled. The control she exhibits in her voice is just phenomenal and she uses it to create yet another mood with masterful economy and to great effect.

It’s after line thirty three that the song hits its highest point. But there are no lyrics. Amoroso simply breaks into a series of la la las — apologies, I am sure there is a more technical term for this. Her emotion is so great that words would just get in the way and it is her remarkably evocative voice, accompanied by a ringing string section, that carries the song to its apotheosis.

The last stanza is a repeat of the nine line refrain with a short coda attached. It is only in the last three lines that she finally lets us come back down to earth, spent, and having in the course of just a few minutes, lived, relived, or lived by proxy, a moment of intense beauty and feeling, the complexity of not love but the longing and desire that flame up at the beginning of any new romance, as uncertain and unclear as it might be.

More than any current singer, at least for me, Alessandra Amoroso creates and transmits the complex of feelings for which Italian music is so renowned. This kind of writing runs the risk of coming off as pretentious and superfluous, with the idea being that you should just listen to a song, but her artistry is so great that I think it needs and deserves careful and engaged thought to be fully appreciated.