A Guide To Your First Time At The Opera

Our opera expert takes you through everything you should know before your first time at the opera. 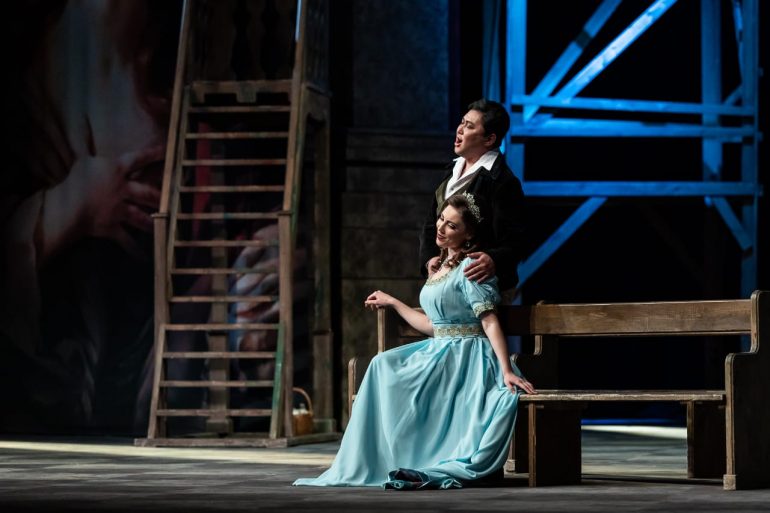 Primorsky stage of the Mariinsky Theatre. Photo provided by Gennadiy Shishkin with permission.

First time at the opera? Then it’s time to make your operatic debut. The opera is always an amazing opportunity to enjoy an incredible new experience. Yet, it’s one that often comes with many questions. What do I wear? When do I clap? How will I know what’s going on?

As an opera singer myself, I appreciate that the opera world can be a little intimidating. Now that the pandemic is receding, I want to share some tips and ideas so you can have a beautiful first time at the opera experience.

Opera doesn’t come cheap. It’s a frustrating fact, particularly in Italy. Yet it’s important to be aware that there is good reason for the cost. A full orchestra, theater, set, designer, producer, and director all need to be maintained — and that’s before you even think of the singers themselves. But there are ways to make it more affordable. La Scala, for example, offers a range of seats for less than €20. Checking all available show times and seat options can often reveal more affordable options than you might expect.

Finding the right opera for you

No two operas are the same. So, going to the opera is never just a single experience. And just like you might enjoy one novel, but not another, you aren’t expected to like all operas. Instead, think of matching an opera to your mood or to your personal tastes. This way, you’ll find a work that resonates with you emotionally.

Take a moment to figure out which opera is the best for you. For example, if an entire 3 hour opera may seem to you ‘too much’, try an opera concert that showcases a selection of arias from different operas performed by different voices. This way, you can introduce yourself to a variety of opera genres and styles. It may become a truly beautiful discovery.

Be prepared to do a bit of background research before the curtain rises. There are plenty of books and websites offering you a synopsis and details about operas.

Once you have a ticket, it’s time to think of the dress code. It’s important to feel comfortable, but getting in the mood is a must. Remember, what you wear is really up to you — but while there are some places where you can turn up in jeans, at the Italian opera you may feel a little underdressed.

It’s a whole lot of fun to get dressed up and be glamorous for a night at the opera. Where else can you try wearing your grandmother’s pearls, your most elegant shoes or the precious little clutch, or even break out your wedding suit?

Sure, it’s not mandatory, and I’m sure that looking around the theater, you may be shocked by some overdressed or underdressed men and women, or by tourists in whatever-they-were-wearing-that-day. Remember, theater and concert halls are democratic places and they welcome all and everyone.

But no matter who is wearing what, it’s important that going to the opera is a really special event, first of all for you. Especially if you are not going alone. So have fun and be creative!

Talking more seriously, whilst Asia and Russia and many other countries are getting ever more into opera, the art form in Italy is largely seen as an elitist cultural cul-de-sac that hasn’t much relevance to anyone.

Populist mass culture has undoubtedly driven away much of opera’s audience, and there is a great number of elderly people who still have never been to opera in their lives. Unfortunately, although opera offers the most technically impressive live vocal performances and one of the most incredible experiences for our senses, it has also created an incredibly strong prejudice.

But there’s so much more than popular prejudices like people going to opera just to show their fur coats or commentary like how tickets cost a fortune while there is so much poverty in the world. Yes, it’s true. But the solution is to give everyone access to this beauty — not to abolish it forever.

Prestige or an intimate performance?

Finally, should you attend a large, historic opera house, or opt for something smaller, such as an independent theater, a cultural association, a regional house, or a smaller touring company?

Smaller venues might offer unrivaled intimacy and a preferable atmosphere. You’ll be amazed at how much more willingly and easily you can suspend all your disbeliefs for opera during a smaller organization’s event and how quickly you may get involved with the opera arts thanks to them. It can be life-changing to see opera singers performing so close to you.

Yet, going to historically important opera theaters can be unforgettable. In these venues, you will see some global superstars and the highest performance standards — along with some of the most impressive architecture in Italy. In a way, going to big theaters is like going to a temple where everything is sacred, with no chance for personal contact with performers. Therefore, that magic energy exchange with everything going on the stage is not really possible.

Here are the most important venues where you can go to see an opera in Italy:

Opened and originally designed by neoclassical architect Giuseppe Piermarini in 1778, La Scala is probably the most famous opera theater in the world today. It has practically established and dictated world opera standards over the centuries, particularly in the first few decades after World War II, by bringing back Italian belcanto opera singing.

La Scala was badly bombed during the war but reopened in 1946. It remains a top opera house in Italy. Reopened in December 2004 after an extensive renovation, it has over 2,000 seats, as well as a bookshop, bar, and history museum, too.

Teatro La Fenice, ‘The Phoenix’, is one of the most famous and most beautiful theaters in Europe. It opened in 1792 in Venice in the San Marco neighborhood and was nearly burned down twice by fire. Like its name, this theater rose from the ashes in 1996 with the support of many benefactors and celebrities around the world.

Teatro San Carlo, in Naples, is the oldest opera house in all of Italy. It was founded in 1737, making Naples the world capital of opera. It was home to some of the earliest ballet performances in the country, as well as some of the first opera buffe in history. With over 3,000 seats, this theater raised within its walls several icons of Italian music such as Giovanni Battista Pergolesi, Gioacchino Rossini, and Gaetano Donizetti.

The Teatro Massimo of Palermo is the third largest opera house in Europe and one of the continent’s great masterpieces. Before we even talk about opera, the domed building is considered an architectural marvel.

Opened in 1897, the Teatro Massimo was one of the symbols of the belle epoque in Sicily. In recent years, the innovative administration of the theater, along with year-round performances of opera, ballet, and music, has been proposing incredibly original large-scale projects, including Opera Camion — touring performances in collaboration with the Teatro dell’Opera in Rome — children’s projects such as ‘Night in the theater’, and many others.

The Teatro Massimo will always be the foremost opera house in Sicily as well as one of the finest in Europe and the world.

Arena di Verona is the restored Roman amphitheater in the heart of the famous town of Romeo and Juliet. With one of the best acoustics in the world, the theater plays host each year to international opera stars during the world’s most prestigious opera festival under the open sky. The atmosphere created by the history and architecture of this ancient theater alone is just breathtaking and unforgettable.

Ready for your first time at the opera?

It’s important to be a part of this beautiful Italian cultural tradition, to contribute and support those who give some life to this music today. It’s especially true during this pandemic period, when all who work in theaters have suffered, especially in Italy. Opera singers, musicians, costumists, makeup artists, scenographers, and the whole administrative and technical personnel would be so grateful for your support.