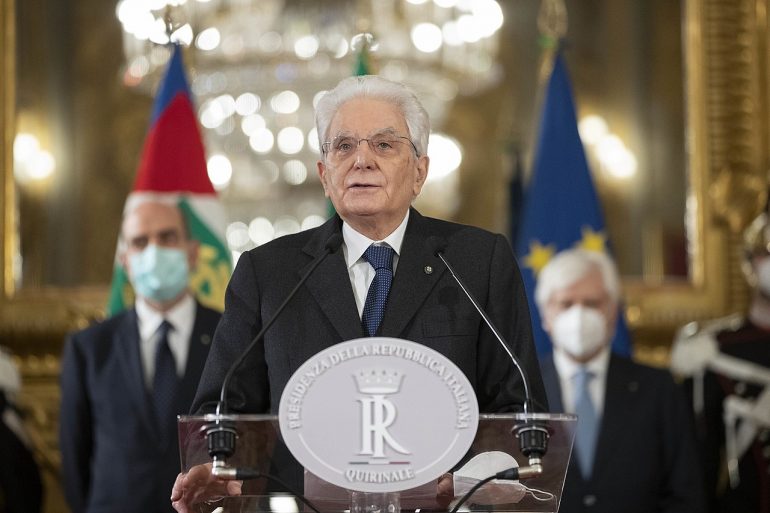 ‘Soaps’, those unending television serials dealing with domestic situations, are in Italy affectionately known as telenovele. As in many other countries, they’ve always been a staple of cultural consumption. They can go on for years and audiences generally remain loyal. But to keep plots moving, the soaps will, of course, be full of melodrama, misunderstandings, back-stabbing, and sentimentality.

Italy also loves its ‘political soaps’, which are played out in the chambers of the Italian Houses of Parliament along somewhat similar lines. These real-life soaps are bolstered by a reliable supply of talk shows on public and private television channels, on which the show hosts, too, become characters in their own right, vying for audience ratings. The more the guests disagree, the happier everyone is.

Which is how the recent presidential election played out. But why did this particular election matter so much? When the president’s role is largely ceremonial, can it be just a collective fondness for the candidate himself? Let’s take a look at the context — and consider why Italy is yet again considering electoral reform.

In 1946, following the trauma of fascism and the horrors of World War II, Italy transformed from a monarchy to a republic and instituted its bicameral parliamentary system. Since its inception and until now, the Chamber of Deputies has had 630 elected members and the Senate 315. To eliminate the risk of repeating the country’s recent past experience by allowing excessive control by any one leader, the prime minister who leads the government must have the support of both Houses.

Meanwhile, the President of the Republic is elected for 7 years by a special Electoral College composed of the entire parliament and representatives of Italy’s twenty regions. The role is mostly ceremonial, yet the incumbent still has important responsibilities — such as naming the prime minister and ensuring every law abides by the constitution. The president also has the power to dissolve parliament and call new elections if parliament is in deadlock. He cannot, however, do this during the last six months of his mandate.

This year’s presidential election kept Italians glued to their televisions for a full week enjoying the twists in the narrative and the fall from grace of some who considered themselves king or queen-makers. The result has been the re-election of the outgoing president Sergio Mattarella who had already packed his bags and boxes and had them moved, followed by delighted paparazzi, to his new apartment.

But it wasn’t supposed to be this way. When the previous outgoing president, Giorgio Napolitano, was confirmed for a second term in 2015 the motion was dubbed ‘a unique and unrepeatable happening’. But the show must go on and Parliament couldn’t agree so ‘unique’ and ‘unrepeatable’ were hastily dropped from the script.

Italy is renowned amongst Western democracies for the instability of its governments. That has been, in large part, built into its political system. The voting system was for a long time strictly proportional, and given significant voter fragmentation across many parties, no single party from the 1950s onwards could achieve an electoral majority in its own right. Between 1946 and significant political reform in 1994 there were more than 60 governments. As a result, the daily news was typically focused on political crisis, teetering governments, and the complicated establishment of unstable multiparty parliamentarian coalitions.

The best-known coalition from that era is perhaps the so-called Pentapartito — a complex five party-coalition that extended from the center-left Socialist Party to the conservative Liberal Party. Yet during all of this time there was a kind of stability dictated by the domination of the now defunct Christian Democrats, they were in all governments and by the 1948 conventio ad escludendum that made sure the Italian Communist Party (PCI) was kept outside of national government. Both clauses had to be met to have a guarantee of American backing to shore up the Italian economy in times of need.

Yet, by the early 1990s, things were to change. Fed up with political turmoil and a political corruption scandal known as Tangentopoli, Italians voted for reform. A new voting system was introduced in 1994 to reduce instability and old parties such as the Christian Democrats and the Socialist Party, tainted by Tangentopoli and by the strong desire of voters to change the old system, were largely washed away. A process of significant political realignment began.

In the early 1990s political parties — Daisy, Olive Tree, Love Party, The Network, The Pact, Do, Live Italy and so on — made their entrances and their exits. Hasty guest appearances in the soap if you will. In this vacuum, many politicians and observers were taken by surprise in 1994 with the meteoric rise of the center-right party Forza Italia — headed by the controversial tycoon, Silvio Berlusconi, with his own media empire to back him.

Who could have thought that he would steal the limelight and hold it and, in the process, create a new brand of politician? Since 1994, he has been PM in four governments, serving in a post-WW2 record of nine years in total.

While written off many times since, in this recent presidential election Berlusconi was once again recognized as crucial. In this episode of the political telenovela, he livened up a now rather tired plot — first by putting himself forward as candidate and then withdrawing as soon as the three right-wing parties became embroiled in a figurative mud-slinging match. They may well pay a price for their hasty, uncoordinated canvassing. Talk shows on all television stations were, of course, guaranteed a few evenings of primetime viewing.

Since the start of the so-called Second Republic in the early nineties, Italy has enacted a number of electoral reforms in its pursuit of greater government stability.

In 1993, the system was again modified and replaced by a mixed-member majoritarian system selecting 75% of MPs in single-member constituencies, and the remaining 25% via proportional representation. Named the Mattarellum, after the recently re-elected President of the Republic, this solution helped to bring about a bi-polarization of the party system along two main center-right and center-left coalitions.

The latest of these was a major reform passed in 2017 which created a new voting system, the Rosatellum, proposed by Ettore Rosato. In March 2018, elections were held under this mixed-member proportional system, with just over 1/3 of parliamentarians selected on a first-past-the-post basis and the remaining two thirds allocated proportionally.

However, Italy still has a very cumbersome double investiture procedure. Both chambers must approve before any new government can be sworn in. Meanwhile, senators are elected on a regional basis and by those voters who have reached the age of 25, so several recent elections saw no consistent majorities in the two chambers. It’s not exactly easy to follow.

After the 2022 presidential election, the reluctant President Mattarella, in his second inaugural address, called for an acceleration of reforms that are needed before the political election of 2023. These are reforms linked to the nearly €200 billion in conditional grants and cheap loans that Italy is to receive from the €750 billion Next Generation EU recovery fund. And it is this money that explains why January’s presidential election matters so much.

Yet it is not certain that Mattarella’s wish will be fulfilled. The leader of the center-left Partito Democratico, Enrico Letta, is calling for a discussion to stop the “change of jersey midway through the match” by members of Parliament. So far, 267 changes of party have occurred during this legislature, with some parliamentarians doing it more than once. Such changes would in future result in monetary sanctions, and the loss of appointments assigned prior to the change of allegiance. However, in fabulous soap-style, it’s been pointed out that Elisabetta Casellati, President of the Senate, has done precisely that.

Meanwhile, the Five Star Movement that came to power by promoting a squeaky-clean image already managed to pass a motion to reduce the number of parliamentarians and eliminate excessive parliamentary commissions. As a result, in the next election the number of senators will be reduced from 315 to 200 and MPs from 630 to 400. Not everyone is happy with the inevitable cutbacks and some Five Star members privately wonder if they shot themselves in the foot.

The heart of the matter

The presidential election aside, in the predictable swirl of changing allegiances and shady characters, instability thrives. Indeed, it remains baked into the political system. With a recent poll suggesting that 55% of Italian politicians are unhappy with the current electoral system — with the center-left and Lega preferring a more proportional system and the far-right Fratelli d’Italia preferring a majoritarian system — there’s little satisfaction with the current state of affairs.

The majoritarian electoral system aims to produce single-party majority governments, leaving little option for the small parties than to prop up weakening majorities. Such a system is more answerable to the electorate, it helps clarify responsibility for policy decisions, and facilitates the removal of bad government. The result at the poll conclusively determines the makeup of government. Proportional representation, in contrast, spreads out responsibility and accountability based on the percentage of votes received.

This current government of national unity, led by former ECB President Mario Draghi, is very vulnerable to the political maneuvers to which proportional Italian politics is so prone. A recent analysis in the prestigious US magazine, Foreign Policy, suggested that Draghi may no longer have ‘whatever it takes’ to be the solution to Italy’s ongoing woes. This presents us with the plotline for this telenovela’s next few episodes. But if he can hold out, Italy may see the stability that it has been lacking for so long.