The Italian entertainment landscape is increasingly turning to the millennial experience for inspiration. Generation 56k is a great example. 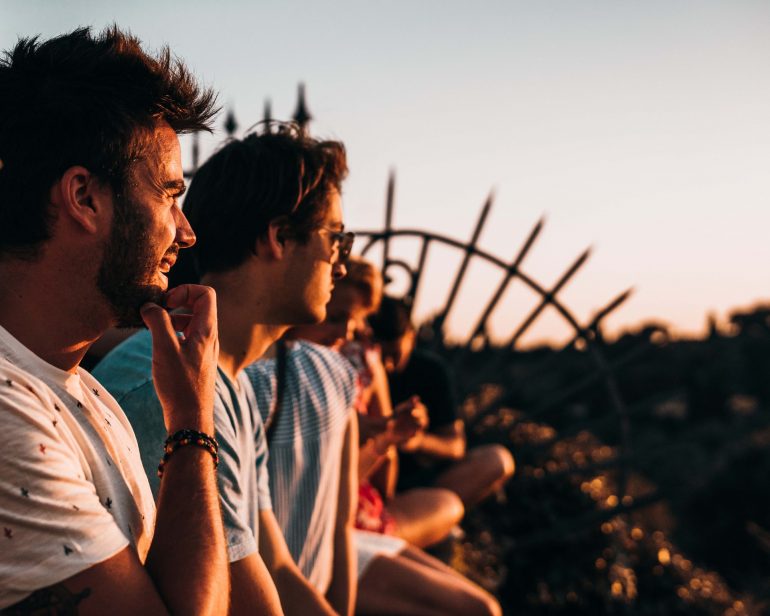 Remember the days when you couldn’t connect to the internet while placing a phone call? Maybe you do, maybe you don’t. Whichever it is, your response will shape your take on your memories of being young.

But, now that millennials — the last witnesses of a world without technology — are getting older and older, their biases are taking over entertainment. And in Italy, Netflix’s new hit Generation 56k is one of the TV shows exploring the depths of the millennial experience, through memories of a time when the internet first arrived on the scene.

An ode to nostalgia

The series flicks back and forth between the 2020s and the late 1990s, between millennial adulthood and the more innocent time of childhood. The romantic ‘dramedy’ follows friends from the small island of Procida, off the coast of Naples. The internet finally arrives in their village, changing their lives forever.

Fast forward to today and the millennial friends are living in Naples, working on an app that allows users to escape bad dates. If there ever was a perfect millennial idea, perhaps this is it.

Daniel, the protagonist, goes on a date, meets a woman, and has a great time. Her name is Matilda. But there’s a problem. He thinks she is a woman he met on the app — but, instead, she has been stood up by her friend and is just playing along. What he doesn’t know is that she too is from Procida. Nor does he recognize her from school, where she always had a crush on him.

The series plays on familiar feelings for millennials, and for this reason can be seen as part of a little revolution in Italy’s media landscape — especially for TV. Alongside other series aimed at the same demographic, such as Baby, Summertime or Astrological Broken Hearts, Generation 56k can be seen as part of a cultural shift that is finally paying attention to the millennial experience. This is the first time that an Italian TV show looks at how digital technology has impacted the lives of the first generation who grew up in its shadow, with all the byproducts that come with it: the sense of idleness, the longing to find one’s place in the world, and the uncertainty of where to call home.

One of the creators of the show, Francesco Ebbasta, identifies the elevator as one of the series’s most important symbols: “There is a motif of elevators in the series. They allow us to get to where we need to get quickly, but no longer allow us to know our neighbors. Sometimes I also miss the way the internet once had a specific place and time: the desktop computer from which I connected while my mother timed me. Today we pay the pledge of the initial euphoria, but then find ourselves wanting to be a little disconnected.”

The speed of the elevator could stand for more capitalistic values as well — the startup, the gig economy, industries in which the characters of Generation 56k work. These are the younger workers who bring a new entrepreneurial spirit to the country and step away from Italy’s more traditional model of the ‘family business’, an economy that has passed away.

Yet, Generation 56k is not the only show exploring similar themes. Most notably, Michele Rech, cartoonist and writer of the Netflix show Tear Along the Dotted Lines — who goes by the name Zerocalcare — is another hero of the millennial and Gen Z generation. This is not something he had planned. But he has nonetheless become something of the voice of his generation.

In a recent interview, Rech said that “work is killing my life,” and it’s a mood that is captured in his semi-autobiographical series. It’s another series that plays on the disconnect and fracture between the hero’s life journey and the one experienced by his boomer parents. It’s an intimate inside on the coping mechanism of his generation and their struggles, plights, and vulnerabilities.

It was a huge hit — and came with something like catharsis for a millennial generation. Finally, they were being seen. Someone was talking like them, behaving like them, representing them, and telling them it was okay to have challenges, to not be where you want to be in life. In a globalized world, the fear of failure — professional, romantic, personal — is now starting to get represented on the screen and audiences are relating.

“In this world, it is very hard to find stability.” A young Italian woman opens up for an NBC Left Field documentary called Italy’s Millennials: Caught Between ‘Mama’s Boys’ and Making it Work. The documentary focuses on the issues faced by the younger generation, who are entering the workforce in a moment of economic stagnation, while Italy’s moral structure shifts around them. It focuses on the pressure experienced by young adults — to have a traditional family life and structure but also to mimic the lives their parents once had.

There are approximately 6.6 million millennials in Italy. Some are now close to 40 years old — with plenty of life experience under their belts — and yet many feel like they don’t totally belong in the adult world. Thanks to the likes of Generation 56k and Zerocalcare, the entertainment landscape is starting to shed light on this very specific millennial feeling.