Behind The Curtain With Maria Francesca Mazzara

We spoke to opera singer Maria Francesca Mazzara about how an international artist dealt with the pandemic — and what we should expect next. 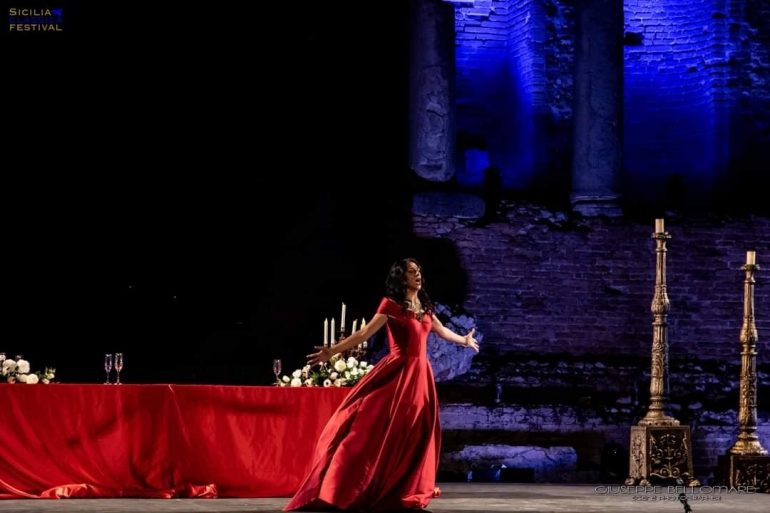 Let’s bet that two years on from the start of this pandemic, you have missed the feeling of being in a unique, refined atmosphere where everything seems romantic and timeless. You wouldn’t be the only one. There’s nowhere you can feel really special if not at the opera.

Despite the pandemic, the whole world seems to need to bring back the elegance of old times in everything and find its new interpretation that reflects and somehow matches our best choices within this difficult period. Theaters, classical music, and opera always offer you an important key to find not just your true self, but the very best version of yourself.

We spoke to the rising international opera star, Maria Francesca Mazzara, about how she felt during the pandemic. The soprano singer is famous particularly for her impressive, elegant, and sensual interpretations of Violetta Valèry in Giuseppe Verdi’s La Traviata and of the title character in Gaetano Donizetti’s Lucia di Lammermoor.

Maria Francesca Mazzara has performed in many important Italian theaters, including the Teatro Massimo in Palermo, the ancient theater of Taormina, and the Teatro Sociale in Mantova. Alongside this, she has already had an incredible career abroad, singing at the Salzburg Festival and concert halls in France, Russia, Japan, Greece, Poland, and Romania, as well as New York’s Carnegie Hall.

However, all of that was put on pause during the pandemic. We found found out how Maria managed.

What were your first thoughts when the theaters were forced to close in the first days of the pandemic?

It all came upon us so suddenly. I remember like it was yesterday the day it all started. I was at the Fenice in Venice applauding one of my dear friends, Francesco Vultaggio, a colleague in many theatrical productions. That was the exact moment when I learned about lockdown.

I saw that opera just in time, and then everything was suddenly suspended. I remember the sense of expectation and fear, combined with a complete inability to predict what would happen next. Shortly after, the entire world locked down. I am trying to remove that period from my memory, because if I look back I see only darkness. It was incredibly difficult.

As an opera singer, how did you spend the different periods of the pandemic?

Despite everything I practiced my singing, I studied a lot, and I clung to the hope that everything would end soon. I tried my hardest to remain as confident and faithful to my arts as possible, whilst inside I went through great suffering, as many others did too.

During that period what was previously so simple — singing to video cameras — seemed an enormous gift, even it were only one aria, Puccini’s Oh, mio babbino caro, accompanied by maestro collaborator of the Teatro Massimo, Giuseppe Cinà. Yet, still, during the first period of the pandemic, despite the fatigue, the closures, and everything else, I was not yet aware of what was still to come.

How did it feel to return to the stage?

I will never forget the first time I returned to sing again on the stage. It was a celebration event dedicated to Lorenzo Da Ponte, held where he was born and in the theater named after him in Vittorio Veneto, in Treviso. Returning to sing on the stage, after the privations we all experienced, was such a great joy.

It was a mix of emotion, of gratitude and privilege. That time I experienced what it meant to be singing without an audience, in an empty hall, during a concert broadcast in streaming, organized by the “Friends of Music” of Alcamo. It was different. But, despite everything I was grateful. I sang to the camera trying to convey all possible emotions and imagining to myself that the hall was full. Despite the closures, despite everything, we were there with the music.

How did you manage the organizational difficulties after the first phase of the pandemic?

Later, returning to the stage and seeing the audience again moved me as never before. From that moment the return to the scene was filled with a lot of caution and attention. But the many rules and restrictions didn’t matter — I was back singing!

I even managed to renew my performances abroad, in Romania, for example, at the Opera Romana Craiova, to sing Rosina in Rossini’s Barber of Seville. Before the restrictions were imposed anew in this beautiful theater, I sang  Norina, an incredibly beautiful role in Donizetti’s Don Pasquale. For a moment it seemed that my previous globetrotting life had returned. The feeling of insecurity made me even more aware and grateful for what I have. Now every time I’m on stage I will always feel grateful.

However, this period offered an unexpected moment of gratification too. A beautiful experience, even if complicated at an organizational level, was becoming the main singer for Donizetti’s Lucia di Lammermoor at the Teatro Massimo of Palermo. I bought the ticket for the flight from Veneto to Palermo the night before, and I was lucky enough to find an analysis center that literally declared me ‘negative’ on the flight!

Yes, I had already played this beautiful role before, in the United States, in Japan, on tour with the Verdi Theater of Trieste, and at the Marrucino Theater in Chieti, but some time had passed since the last performance,  and I didn’t even have the score with me to review. It was an experience that I will not forget! Lucia di Lammermoor was the public reopening of the wonderful Teatro Massimo, in the city of my birth. I rushed so fast that I didn’t even have time to read who the orchestra director was. Without rehearsals, I was literally ‘catapulted’ from the plane on to the stage of the public dress rehearsal.

By the way, it turned out that the conductor was Roberto Abbado, the tenor Celso Abelo, and the baritone Ernesto Petti and other soloists and choir singers.  But what an indescribable emotion to perform to the beloved public.  Unfortunately, due to the pandemic, I was unable to reach the Baku Theater in Azerbaijan for the productions of La Traviata and Rigoletto, four concerts with the Abbruzzese Symphony and many more.

Aside from music, what else did you spend time doing during the pandemic?

I learned to focus much more on the profound meaning of art, of research, reinventing myself and studying. The most important thing, I felt, was never to lose your heart and spirit.

Ultimately, we need arts to enrich our mind and soul with beauty. The task of us artists is to tell lives and stories, to seek after the truth and express it to others through our own emotions. Thus we need the public that reflects all what we transmit, the public that propagates these emotions. Beauty will save the world. Even if theaters are the places where very strict protocols and rules are applied, both for us artists and for the public.

Hopefully, the fear of this does not take over. After the pandemic, the happiest memory will always be my parents in the public watching and listening to my singing and being close to me, as they normally can’t follow me on tours.

What place does opera have in the world after COVID-19?

I’ll answer this in a slightly different way. A few years ago I participated in a production by the Rome Opera in co-production with Palermo’s Teatro Massimo, that was even mentioned in The New York Times. Called Figaro Opera Camion, it was a version of Rossini’s Barber of Seville re-elaborated as a traveling opera production, where I was singing the main female role of Rosina, and we went through many parts of Italy, including disadvantaged ones.

It was wonderful to see the amazement and interest of those who had no idea what an opera could be. It made me realize how important these types of actions are, particularly after COVID-19. Moreover, my reflection shifts to the importance of teaching music at school and ends with the hope of making the theaters a place of meeting and culture absolutely close to everyone.