Go there. Take a walk. Have a bite. You will love it. 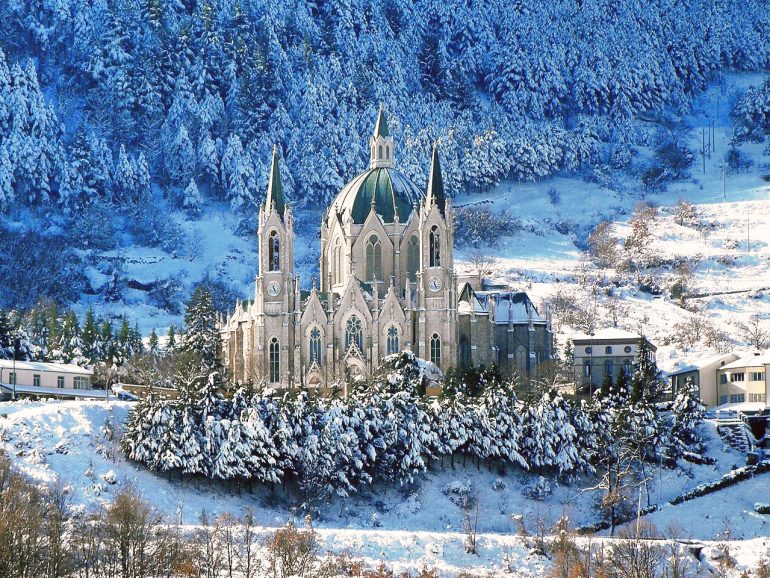 I recently returned from a trip to the Basilica Santuario di Maria Santissima Addolorata, in the town of Castelpetroso, in the province of Isernia, in the magnificent region of Molise. I want to say that what I followed was a perfect itinerary but I can’t do that for a couple of reasons, First, the trip was largely unplanned and it was the unplanned nature of the gita that really made it special. I could say do this and do that, go here and go there, and you could do that, and it would be fine, but who knows what alchemy lies in chance, including elements like the weather, what is open when, et cetera. Second, more simply but just as profoundly, different people like different things. I am willing to bet, however, that whoever you are and whatever you do, you will find much to like in this spectacular but relatively unknown and under appreciated part of Italy.

One of the first things to know is that the Addolorata, as it is commonly known, is built on the site of a Marian apparition, of the kind that lies at the heart of Lourdes, for example. Specifically, about 130 years ago, two young shepherd girls reportedly saw the Blessed Virgin Mary in the stony landscape that looms above the place where the basilica is now. You can actually walk there — it’s about a mile up and back through a terraced landscape — and the whole event is recreated using life sized bronze statues. Also along the way are depictions of the seven sorrows of Mary representing the addolorata theme. I’ve already written a bit about the sorrows and we can have a discussion about these apparitions as they’ve been recorded — in France, in Portugal, in Mexico, in Bosnia and Herzegovina, and in other places — at another time. There is a large and growing social scientific literature on the phenomenon and it is fascinating. I think even popular scholars such as Charles Foster, who writes largely about nature and how human psychological engagement with it has changed over the past several centuries, has something to say about apparitional phenomena, if perhaps only tangentially. But again, that will have to wait for another time.

What I want to relate in this piece is simply what a great place Molise is. The first thing to know is that people there are friendly in the way that they are only in the south, and put me firmly in the camp of including Molise in the south, along with Campania, Puglia, Basilicata, and Calabria. I don’t include the islands, Sicilia and Sardegna, as a part of the south the way some others do. They are their own thing, like Florida and Texas, which I similarly hold apart in the US context. Molise is not part of the center. To be a part of the center you have to share a border with Umbria, Italy’s landlocked heart, so Toscana, Lazio, Abruzzo and Marche. The north is everything else: Liguria, Piemonte, Valle d’Aosta, Lombardia, Veneto, Trentino-Alto Adige, Friuli-Venezia Giulia, and Emilia Romagna. There are twenty in case you are counting, but it gets complicated for reasons we can go into later.

But back to Molise. The friendly people are probably selling you bread or some similar product, or maybe this is just my bias showing because I cannot resist a forno a legna for the life of me. I have to admit, the bread culture of Italy, especially northern Italy, can sometimes let me down, but that is not true in the south where the bread is dense and heavy and really tasty. I know some people feel differently, but for me the bread of the Italian south is among the best, if in fact not the best, in the world.

But it wasn’t just the bread. I am here to announce that the best coffee I have ever had, I had in a bakery in the town of Santa Maria del Molise. It is called Panificio Delizie and the people who work there are as nice as the people at the Addolarata and as at another bakery in the hills above it, in the village of Macchiagodena, namely Forno A Legna Di De Cesare Anna Lucia. I don’t know who made the bread that I had at Donna Carmella, where I had lunch, but it too was outstanding, softer and moister than the offerings at the other bakeries, but just as interesting and delicious. But here I am taking about the bread again.

All of these places are so clean and attractive and inviting, both in terms of their architecture and decor, and in terms of the people who run them. And the fact that they are all nestled in a wild and spectacular landscape makes them all the more special. And if I can loop back to those two young women who inspired the siting and construction of the Addolorata, I can’t help but see a theme that runs through this enchanted region consisting of woman + wilderness = miracle. I know that ‘the women of southern Italy’ is already a theme about which much has been written, but we need more, particularly about the relationship between the women of the region and its landscape. And we need more writing about the men of the region also, of course, but it is harder to do this in the same way, and to write more generally about the people of the region, while certainly legitimate, might be harder still, given the essential nature of gender. Or at least that is where we are in our culture currently.

So what is Molise? It is a mountainous region with lots of trees and many spectacular gems set and nestled within this wild landscape. It is a place where special things happen. It is a place of great beauty and nice people, and of beautiful things to see and delicious things to eat. Go there. Take a walk. Have a bite. You will love it. Oh, and lest I forget, if you need a place to stay, stay at L’angolo fiorito in Indiprete, which fits right in with our theme of beautiful women in the wilderness, a theme that makes il Molise and la Molisana so inviting.