The man never offered his name. The closest I ever had to a conversation was to say good morning. He did not acknowledge or seem to hear. 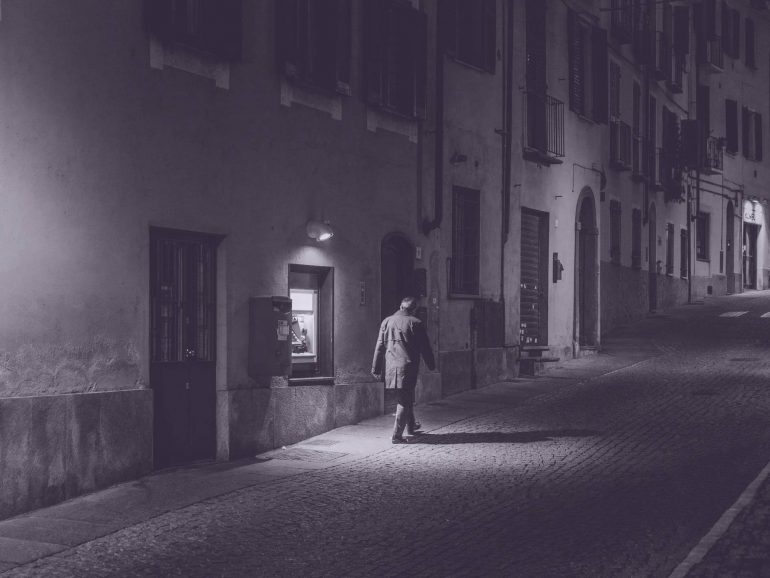 A man walking down the street, Italy. Photo: Mirko Mina on Unsplash.

In the years I have lived in Sarnano, Le Marche, full or part time, I saw one man, twice a day, walking the streets of this small hill town between the sea and sky.

He went to the Supermercato Coal, walked with short turned in steps and concentrated on where his feet settled. He did not look to either side, moving slowly, indifferent to the people and cars that slowed when he crossed the road. He carried a plastic bag. Even with few groceries his body twisted and the bag swung in half circles, hitting his thigh. The thought he had suffered a stroke occurred to me.

I watched him sitting in the piazza with the tall trees and the statue of a priest in contemplation, saw him troubled and knew nothing about him. Months later I followed him at a distance. The seven minute walk lasted a half hour. He headed into the centro storico, up through the Brunforte gate and onto via XX Settembre. He walked to La Piccasera with its five benches and flower boxes, a fountain and the saint in the corner under glass with a forever electric candle, between the backs of old buildings that ended at an overgrown grassed area which held the remnants of stone foundations surrounded by green wire fencing. Before he lived there, a Romanian woman rented, kept chickens and tended a garden. She left, back to family and home; the garden turned wild and the chickens were dispatched. The grass fell over itself and the wood separations for the vegetables rotted in the rain.

He lived in one of four apartments built in the years of the last economic boom. The others were not occupied. Behind the shutters, there was no movement or hiss of whispering gas being used for heat. Leaves filled the corners of the door frames. The slab steps were chipped. If you walked further there is an  abandoned house and bar that opened in the summer and had a wonderful view. You could see the mountains and the 17th century. My wife and I stayed there years ago. The house was wet in the August heat, the centipedes large, happy and free. We killed them with poison and our shoes.

The man never offered his name. The closest I ever had to a conversation was to say good morning. He did not acknowledge or seem to hear. One shoulder would go up, a question.

He was stocky, had long hair untrimmed and oily; it never seemed to grow. His clothes were dirty, the shirt tucked in on one side and free on the other. On the side of the shirt that was down, his collar was up in a strange kind of symmetry. His shoes, in a country that values shoes, were rough, the heels crushed. He used them as slippers and left the laces untied.

My maremmano puppy greeted him by standing on his back legs and trying to lick his face. The man was upset and backed away. The warmth of a dogs affection was something he did not seem to know. He may have feared that he would be pushed over, or had been bitten when he was young. He stiffened when the dog approached.

A few years ago I learned more. His family had lived in Sarnano for 200 years. Before that, reserved for survivors and grandparents, there was no memory. Written records are stored in the commune, history written and lost on paper in stacks of thick boarded volumes that the clerk slapped on an old table when he had to find something.

His father worked on a farm, owning nothing, He was labor in a war that killed his generation, on farms, on roads, where ever there was need for a strong back. By today’s standards, he amounted to nothing. He and his woman lived without. There were greater sins than poverty. It was a small family. One son moved to Rome, freed from the confines of school and a future of physical exhaustion. They seldom heard from him and he never returned. The younger boy stayed with his father. One day he was hit by a car while walking on the road and thrown onto the rocks along the side. It was near the Christ figure blessing those that searched for the monastery of St. Liberato hidden in the forest. After that he was slow, his walk and mind, a young man’s smile gone.

I watched him for a long time. Not daily, but I knew he was there, between the apartment, the Piazza della Liberta and the store. I never saw him at the open market, the barber or cafe. He always shuffled and carried a plastic bag. I would greet him and he would shrug, a meager grin; I think he was startled that I spoke. The thought lasted a step and faded. He never expected to turn the starter on a Fiat and go to another place. He just went on, remaining in the town.

For the holidays, I make pastries and give them away. One year I knocked on his door with a full plate. There was no response. I thought he was away or sitting in a room without light. After some time he came to the door in socks, bathrobe and a bedcap. I could see inside, cluttered and dark, the colored bags of the commune. The man from the town does not come this far to pick up plastic, paper or scrap food hung on rusty nails driven into the brick. It must be carried to the bins.

There was an incident. He was at the market and put a number of items in the cart. When he left, the cashier came out and asked why he had not paid for everything. While he circled in confusion, he somehow hurt the woman. The police were called. He sat down while they figured it out. He cried, bit his hand and was not consoled. The police gave him permission to leave. Most of the onlookers were sympathetic; one was upset because his car was blocked.

One year when the days were short and the clouds low, wet snow fell in the afternoon. He became lost and stood in place until someone guided him toward his apartment. I was told they took his hand and said kind words until the door closed. Before that in the summer, he was ill. A police officer, one of the women, brought him food, leaving it with a note. A week later he had recovered and did not know whom to thank.

Less than a month before the Christmas holidays, an ambulance came to the centro. The tall, thin policeman who used to be a plumber made the call. The vehicle could not enter via XX Settembre. Four men had to carry a stretcher and defibrillator, spine boards, oxygen and masks, collars, splints, bandages and a range of drugs and intravenous fluids. His body blocked the door when he crumpled from the heart attack. Where his head hit, there was blood on the stones in a pleasant rich color. Nothing was to be done. The body was straightened and rolled onto the pallet. There is no easy way to move a corpse. It was heavy and  awkward and there was no rush; the men walked with deliberation. There was moisture on their breadth and foreheads. They stopped for a drink of water, pausing the work of death.

One of the street lamps was out; another flickered. The coloured holiday lights were sprinkles, crawling spiders on the pathways and up the buildings. The vehicles with flashing lights waited in the Piazza, engines idling. People gathered, exchanging greetings and best wishes for  the season.

That was the final time I saw him, his head bouncing from the uneven cobblestones as he was borne away.

A few times since I have seen a shadow come out of via XX Settembre and through the Brunforte gate, stepping carefully. The presence is large and moves slowly. I think of the man, mortally wounded, shielded by the millennia-old brick walls and living on the outside ring of the centro where chickens ranged free and no one understood what he did in the apartment.

An older woman cleaned and then removed the broken furniture, kitchen utensils, the soiled bedding that had worn through. The apartment was locked, gas and electricity switched off ; the white disc on the meter stopped moving and froze time. The space he occupied in the world filled in. You would not notice.