Feeling powerless and frustrated, it is said the system cannot change. But what if politics was the solution to climate change? 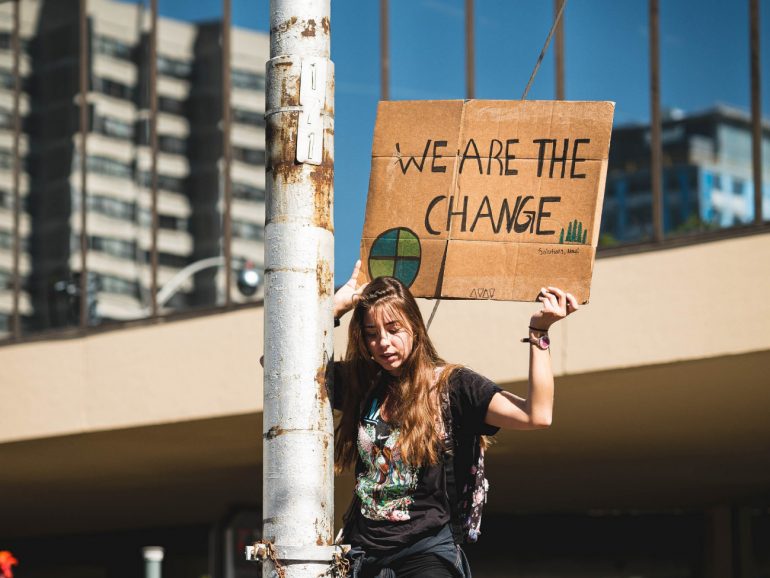 This article is written in collaboration with Francesca Cresta for Rethinking Climate’s column, Sustainable Italy. Rethinking Climate is a youth-led international cooperation nonprofit whose mission is to understand how best we can communicate, and therefore comprehend, the climate crisis and sustainability in its variety of topics. What is it about the way we are communicating climate issues that makes it so difficult to implement the solutions available?

Research published last year shows that youth around the world feel anxious about the climate — and it is largely due to the inaction of politicians towards our planet. What our youth tends to see is that, alongside individual changes, dedicated policies are key to responding to the climate crisis. But there’s a problem: people tend to have little trust in institutions to engage in real climate action — even less trust than they have had regarding COVID-19.

With recent protests in Glasgow during COP26, continual environmental coverage, and speeches by prominent politicians — everyone is talking about the climate. But if the narrative is so extensive, why do we agree on the premises, but remain skeptical about finding and acting upon solutions?

From COVID to the climate crisis

Even when the pandemic overwhelmed our lives, even when it seems impossible to talk for more than five minutes before someone mentions the C-word, we still recognize climate change as a pressing matter.

In Italy, 89% of people now see the climate emergency as the biggest risk to national security, with the pandemic in second place, at 85% of interviewees. Italians also report feeling the impact of climate change in their daily lives far more than other Europeans, with 91% of people in the country experiencing a change, compared to a European average of 77%.

During the first days of January 2022, a year we hope to be better than the previous, I realized that climate change is now. I had a taste of what will be more and more frequent for the rest of my life, no matter what policies we opt for. I came across the news that due to a lack of natural precipitation and continuously high temperatures, there was not enough snow on the slopes in Cortina.

Temperatures were too high even for snow cannons to function. To guarantee good service and make sure the local economy could continue — reasons that echo those used when reopening businesses during the pandemic — snow was now being carried up the mountain by helicopters. My uncle was skiing there at the time, and I was receiving daily pictures from him and his family skiing in a sun-kissed winter wonderland. A few days later, temperatures fell to -12°C, it snowed, and both snow cannons and helicopters could take a break.

My uncle, in all this, did not have to take a break from skiing, but he noticed what was happening around him. Climate change might not be your first thought while you drink a Bombardino on the slopes, but it is having an impact on every part of our lives.

To put this in context, according to the IPCC report AR6, hot temperature extremes over land will increase their frequency from once a decade to 2.8 times a decade with a 1.5°C hotter climate. They will occur 5.6 times with an increase of 2°C and 9.4 times if the climate warms by 4°C. That means more days where the snow melts and helicopters come to the rescue.

Despite all the debates we hear on the news, Italians largely trust institutions to deal with the pandemic. Despite being a more controversial topic than climate change, 75% of Italians in a recent survey expressed their trust in Italian institutions and how they are managing the COVID emergency.

However, this report shows that 86% of Italians believe they are more concerned about the climate emergency than their government. Shouldn’t representative democracies be representative of their electors?

What is more, most people, 72%, would welcome a tax on products and services that contribute most to global warming, thus expressing a willingness to sacrifice some of their purchasing power for the climate. However, another contradiction: 55% think their country will fail to drastically reduce its carbon emissions by 2050.

What seems to emerge is that people think of politics as something that doesn’t come from them. They perceive it as something having its own interests, that goes at odds with climate policy. This perceived inability to change politics, this feeling of powerlessness, is perhaps one of the major elements that prevent people from acting.

When it comes to climate change, it seems that people do not have enough trust in institutions to take necessary action. 85% of Italians think that legal initiatives spurring from citizens and associations against the government for its inability to face climate change are useful to increase awareness and influence public agenda-setting. However, 58% of them think that those same legal actions would be useless to influence politicians and decision-makers.

Maybe the problem then lies in the disconnection between ‘ordinary’ people and those in power — from the lack of trust in governors, mayors, local administrators. With no trust, there is no hope, and with no hope, no action.

Rebuilding trust in institutions is not an easy task — particularly when people, those very people that should kickstart the process, feel alienated. Something that might help us is education.

One example might be investigating existing EU politics, from the EU Green Deal to Italy’s plans for recovery and sustainability, to the results of COP26. Even more, it is crucial to remember that, on top of exercising the right to vote, there are now precedents of associations taking legal action against the Italian government for inaction around the climate crisis.

There are many opportunities to act, but few citizens take them. Perhaps the way we communicate climate and tools for action is key to how powerful people feel in face of the climate crisis.

How much longer can we say we are worried, but not seek education and ignore the effects? When will we stop fixing problems in the short term, merely carrying snow up mountains on helicopters? Agreeing on the existence of climate change is not enough: we should be active and advocate for the things we care about. One example of what we can ask for, together? Italy is currently without a law on climate, far behind most EU countries. That seems like a good place to start.

How do you get your information on the climate crisis? Rethinking Climate is working to collect data on how people think about the climate towards action. You can help us by taking 5 minutes to answer these questions anonymously and let us know.