Eight Italian Destinations To See In 2022

Discover these wondrous Italian destinations you didn't even know were on your travel bucket list. 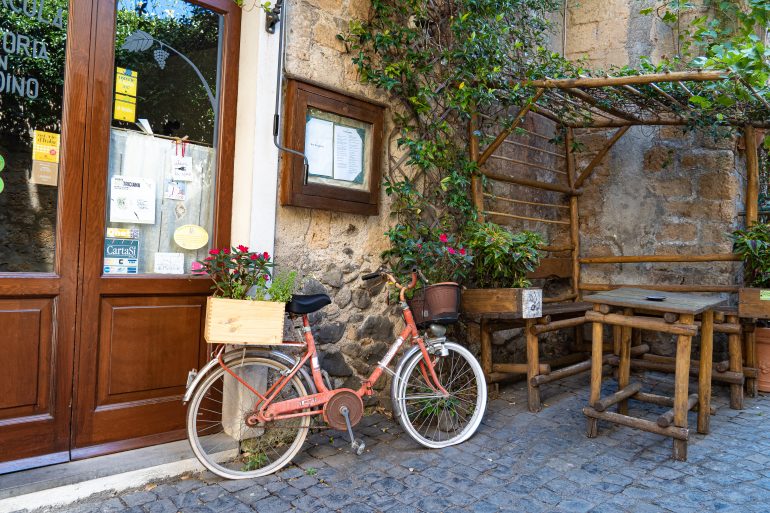 Italy is a cultural powerhouse for many reasons. It goes without saying that the world leader in UNESCO-designated sites has been a long-standing influencer of all things food, wine, art, history, and invention. As the world continues to slowly welcome back international travel and tourism, we’ve highlighted eight Italian destinations that deserve recognition in 2022.

On foggy mornings, this timeworn town appears to hang in mid-air, jutting up towards the sky while it still can. Nicknamed ‘La Città che Muore’, or ‘The Dying City’, it clings to life as erosion continues to wear away at its unstable base. Documented earthquakes and landslides have contributed to Civita’s devastation for centuries, and the urgency to preserve what is left of this medieval gem has warranted extensive restoration efforts. In fact, Civita is the only city in Italy to charge an entrance fee, but the five or so euros you’ll pay continues to help fund preservation and maintenance work to save what is left of the crumbling plateau.

In recent years, ‘The City in the Sky’ has seen a resurgence in tourism by those eager to catch a glimpse of one of most spectacular Italian destinations still standing.

Orvieto: a multitude of historical riches

An hour and a half outside of Rome, you’ll find the quiet town of Orvieto poised on a plateau of tufo volcanic stone. Its striking façade dates back to the time of the Etruscans — Italy’s ancient people — and its perfectly preserved old town is rich with secrets from the past.

Concealed beneath the charming streets runs a massive network of centuries-old caves and tunnels that once hosted a complex of pottery kilns and wells, allowing locals to thrive in this haunting grid while under siege by the Romans. The Etruscans’ presence is showcased even in death. Descend the staggering cliffs to find the ancient necropolis of Crocifisso del Tufo, home to over 200 Etruscan tombs and deemed as one of the best-preserved testaments to this ancient civilization. Locals still refer to Orvieto as ‘the rock’ due to its imposing presence and aptitude to stand the weathering test of time.

Many may know of Siena for being a central Tuscan town, stretched across a hilltop, and still reveling in its medieval history. Pedestrians rule here, but so do horses.

The Palio of Siena is a fierce and thrilling medieval-style horse race that dates back at least seven centuries. For local Sienese, the Palio is much more than a race, though — it’s a passion. The event is complex and ritualistic, but the remaining 17 contrade, or districts, of Siena vie for a spot in the top 10 to compete in this bi-annual extravaganza. The iconic Piazza del Campo is completely transformed into the famous race track, laden with barriers and tuff clay to mimic the races of ancient times. If you find yourself in Tuscany this summer, consider joining the thousands of others who flock to witness this once in a lifetime experience. Il Palio takes place every year on July 2nd and August 16th.

You’ve likely heard of this famous cheese, but the town? Maybe not so much. Pecorino di Pienza is a sheep’s cheese with historic origins — like many other culinary delicacies of Tuscany. It is supposedly one of the oldest types of cheese in the world, documented by the Romans, and even before them, the Etruscans. The production of pecorino is believed to have been created by farmers who had small herds of sheep. The storage and aging process of pecorino is exceptionally important, and in fact, if you meander through Pienza, you will undoubtedly notice the different colorings and coatings of pecorino as they age while displayed in store windows. The town itself is idyllic too. It was once considered the Renaissance utopia of an ‘ideal city’ due to its architecture, city squares, and perspective open spaces — and it absolutely deserves a visit.

Spiazzi: a clinging, cliff side vantage

Spiazzi is home to the Santuario Madonna della Corona (Sanctuary of the Lady of the Crown) that clings to a vertical cliff face, suspended somewhere between the reaches of heaven and earth.

The church is an architectural feat. It was originally built around 1530, and due to its relative inaccessibility, it has remained mostly intact with the help of some restructuring in the 1970s. It initially served as a hermitage where holy men could come for silent reflection, and with it only being reachable by a treacherous mountain path, it truly was a test of faith. Today, the path up to the sanctuary has been modernized, and it welcomes visitors who are eager for a challenging pilgrimage to the top. The views are worth the climb, and I personally think this is one of the most astounding Italian destinations in northern Italy.

Alba: into the harvest

Alba is home to perhaps one of the most flavorful and coveted culinary treasures — the white truffle. In fact, truffle hunting and extraction in Italy just gained UNESCO status in December of 2021.

This process is extremely particular down to the identification of the appropriate area to hunt, incorporating a trained dog, and extracting the truffle using a special spade. The knowledge and practice of this now-protected trade has been passed down for centuries. Alba is a charming town that plays host to the annual International Alba White Truffle Fair and is also home to the National Center for Truffle Studies. If you’re keen for an all-encompassing truffle experience, consider a stop in Alba.

Any wine lover should pay a visit to Montalcino, a territory truly made for one of Italy’s most famous wines, Brunello di Montalcino. Curated from the Sangiovese grape, Brunello in this area must follow a strict and singular process in order to keep its name. Such regulations ensure the wine is aged two years at minimum in oak barrels, followed by a minimum of four months once bottled. Everything else from minimum alcohol content to total acidity and net dry extract is done to an exact degree. It really is a complex art and science.

Those who initially come for the wine tastings often stay for the stunning views atop the town of Montalcino. When you’re not studying its streets of beautifully haphazard cobblestone and storefronts, you’ll likely be staring out over green valleys and vineyards.

Deemed as one of the most unique Italian destinations, Alberobello’s streets are lined with white-washed, coned-roof huts that give off an undeniable fairytale feel. These structures, called trulli, are typical of this southern Italian region, and archeologists believe the first example of these living quarters can be traced back to the 1000s. In Alberobello, specifically, the majority of trulli popped up around the 14th century when they were made to be easily constructed and dismantled to allow for the nomadic lifestyle of the time — and perhaps more importantly, to avoid paying a land tax for permanent buildings.

The town is so unique, UNESCO recognized its status back in 1996, and it continues to be a peculiar gem unlike any other town in Italy. Despite the original semi-permanent nature of these huts, the trulli continue to resist and have stood the test of time. Today, some of them still remain as residential homes, but many have been turned into shops, cafés, and even upscale accommodations for visitors.

Which one of these curious Italian destinations will you consider in 2022?