Draghi’s Path To The Italian Presidency

Mario Draghi is the obvious candidate to be Italy’s next president, but first he must deal with the inevitable tangles of Italian politics. 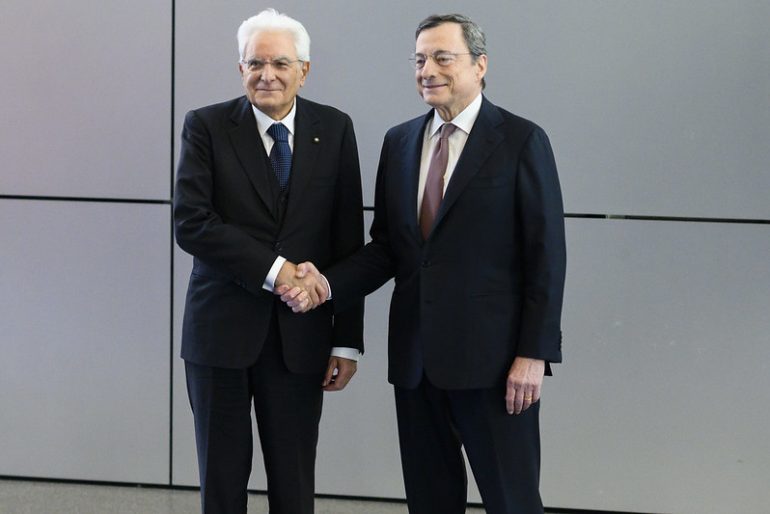 The Italian presidential elections are set to begin. Sergio Mattarella, the current president, will end his seven-year term on February 7, after which his replacement would normally occupy his office as head of state. But we do not live in normal times. This year, Italy’s unique political and economic situation may cause it to depart from its constitutional conventions.

The presidency of the Italian republic is a largely ceremonial post, whose holder possesses formal powers to appoint prime ministers and approve laws. The candidates are not explicitly nominated by parliament, nor are they elected by the public. Rather, much like the papal conclave, they are chosen by a body of 1,000 electors, comprising legislators and regional representatives, through multiple rounds of secret ballots. During the first three rounds, the candidate with two-thirds of the vote wins, while for subsequent rounds the threshold is lowered to a simple majority. The announcement of false candidates by party leaders to mislead their opponents is a customary feature of this process.

But Italy’s long-term objectives may discourage that kind of politicking. The central issue at stake in public discussions is Italy’s commitment, begun under Mario Draghi’s government of national unity, to see through a major EU-funded reform plan worth over 200 billion euros in loans and grants. Draghi’s international standing as the former president of the European Central Bank, added to the confidence he enjoys as head of a broad political coalition, has made him a trusted, if unelected, politician in Italy.

It also makes him a very popular candidate for the presidency. He would be a steady and reassuring figure during a major institutional overhaul. Yet complications arise, however, in his still being the Italian prime minister.

Were Draghi to become a presidential candidate, which he has neither confirmed nor denied intending to do, he would first have to resign and, failing a new majority coalition, risk plunging Italy into early elections — which would otherwise be due in 2023. This would be likely given the unfavorable distribution of parties within the current parliament. There are parties, like Giorgia Meloni’s far-right Brothers of Italy (FdI), which, though alone in opposing Draghi’s premiership, would happily support his presidential candidacy in a bet to secure an election. A return to the ballots might be good for the FdI, but it would run against the general mood of wanting the country to stand on its feet again after two grueling years.

There are two ways of avoiding an early election after Draghi’s resignation. One would be for Draghi to make a viable new government a condition of his presidency, so that he would be keeping his previous seat warm for his chosen successor. He would also be, in effect, acting as president while still prime minister. This is a real possibility, as it is unlikely that a majority coalition would agree on a presidency only to disagree on a government. Further, Enrico Letta’s center-left Democratic Party (PD) has already expressed support for Draghi, while the Five Star Movement (M5S) could be persuaded to support him as the lesser evil to the unmentionable Silvio Berlusconi, the center-right’s favorite candidate.

Another way of ensuring the transition without a pre-existing majority coalition would be for Mattarella to appoint a technical government before he steps down, as president Giorgio Napolitano did in 2011. The Italian head of state does possess this power in times of crisis, even if a government thus established has minority parliamentary support. If this were to happen, Italy would have technocrats occupying both the presidency and the cabinet. Such a state of affairs would no doubt have the confidence of the markets and of the international community, but it may not be seen as legitimate by the Italian people.

There is of course one way of avoiding the impasse altogether. Mattarella could be persuaded to stand for re-election so that Draghi can remain prime minister and continue managing reform until 2023. Mattarella could then resign and a new president be sworn in, perhaps even Draghi himself. This is a solution that Mattarella, who is 80, has repeatedly dismissed, eager as he is to retire, but it would present a less circuitous path forward. Then again, if it were straight-forward, it wouldn’t be Italian politics.