Master Trickster Berlusconi Is Back To Business

Although 85, the controversial former Italian prime minister is seeking a comeback as President of the Republic. 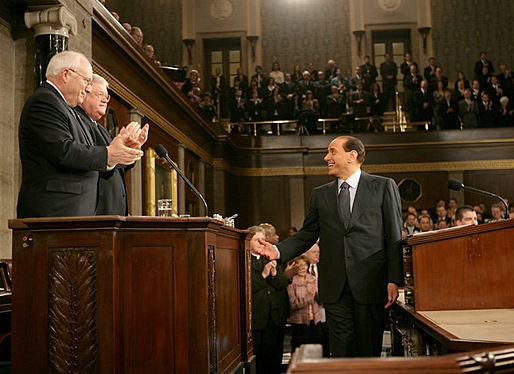 Silvio Berlusconi at a joint session of the US Congress. Photo: David Bohrer, Public domain, via Wikimedia Commons.

Raise your hand if you remember what the cover of the French newspaper, Libération, ten years ago. The paper, commenting on the decision of Silvio Berlusconi to seek re-election as prime minister, ran a sensational headline:“The return of the mummy.”

Ten years have passed, and I wouldn’t be surprised if newspapers today ran similar headlines. Now 85, Berlusconi is back again, hell-bent on climbing the Quirinale, the highest hill in Rome and seat of the Italian presidency. Will he ever get tired?

When talking about Berlusconi, few people would remember the scarce achievements of the former PM. It’s easier instead to recall his legal woes: the lurid bunga bunga, the sex scandal in which the Italian billionaire allegedly threw orgiastic parties starring young women dressed as nuns, nurses, and even Barack Obama. A strange way to strengthen transatlantic relations indeed.

Besides this most famous, he faced trials for pretty much everything else too. He didn’’t miss a chance to collect criminal proceedings and master his skills in avoiding punishment. From tax fraud to false accounting, from underage prostitution to witness tampering, judges have conducted 36 trials against the former PM. Only one out of 36 proceedings delivered a final judgment, for tax evasion in 2013, temporarily barring him from public office.

But with his sulfurous reputation, how come Berlusconi is standing for the office of President?

Although the old dog faced countless trials and international faux pas, he appears to represent the second most popular choice for the top job right now. According to a recent survey, Berlusconi trails only the current PM Mario Draghi as the favorite candidate for president, even gaining 17% of preferences.

What exactly are Italians thinking? Well, there are many things to bear in mind when considering Berlusconi’s popularity. Firstly, he’s a media mogul, having founded the TV network Mediaset and owning publishing houses and daily newspapers. Considering that traditional media still retain power in Italy, with older Italians uncomfortable using the internet, it’s not really so surprising that Berlusconi remains popular, especially among the increasing elder population.

After all, the former PM is an expert in cultivating his public image. The media tycoon has represented himself as a man who turned a new leaf. After facing a sentence to community service, he allegedly finds himself a better man. He settled with a new girlfriend, cares for animals, and even follows a vegetarian diet. A changed man indeed.

More reasons to support him

There are a few more explanations for the long-lasting popularity of Silvio Berlusconi. On the one hand, he joined a right coalition that is expected to win the next general elections. Consequently, it is thought, Matteo Salvini and Giorgia Meloni’s far-right supporters are likely to back Berlusconi’s bid for the presidency.

Moreover, the former PM nostalgically embodies the idea of a successful entrepreneur and a self-made man. Being raised in a middle-class family, Berlusconi founded an empire thanks to his commitment and business acumen. For many, he still represents an era when people, through hard work and bravery, could climb the social ladder all by themselves. Although he is a billionaire, he’s still a man of the people. Who has never dreamed of being a successful business owner once in their life?

Lastly, we should not underestimate the fact that convincing alternatives are dramatically lacking. The anti-establishment Five Star Movement has lost its identity and values, cornered into a supporting role for the center-left Democratic Party. These Democrats, on the other hand, are still trying to be a principled left party with a rock-solid leadership. Over on the far-right, the situation isn’t much better, as Matteo Salvini and Giorgia Meloni are silently quarreling for the coalition’s leadership while their steering wheel is slipping away from their hands.

Will he make it?

While Berlusconi has a robust support base, many pundits don’t believe he will reach the Quirinale. Candidates need two thirds of votes in Parliament to clinch the presidency in the first three rounds. If no one secures that majority, the bar drops to 50% +1.

Simple math shows that all the right coalition lawmakers combined aren’t enough to clinch the majority of two thirds. Besides, although Salvini and Meloni are official partners of the former PM, they have been non-committal about Berlusconi’s candidacy. On the one hand, they are eager to keep the alliance united. On the other, they fear that Berlusconi would reestablish his leadership of the coalition and take the limelight away from them. Perhaps Salvini and Meloni are hoping to keep Berlusconi in the fold while burning his bid for the presidency. Given the former PM doesn’t have enough congressmen, sending him to lose would make room for less divisive candidates.

Ultimately, being elected as president needs bipartisan support. It would be hard to elect Berlusconi without votes from the left bloc.

There’s no doubt that the political vacuum is making the bid for the presidency deadly serious, and the current maelstrom of Italian politics is giving Berlusconi the chance to claim the top job. Let’s give credit to him. His unlikely shot at the presidency comes a year after being ill with COVID-19, five years after open-heart surgery, and a decade after being sentenced to jail for tax fraud and banned from public office. It’s simply amazing, but he’s not quite a mummy yet.

But Berlusconi as president is just not a sensible choice. The role of the Italian presidency lies somewhere between the all-powerful French head of state and the merely ceremonial German Bundespräsident. When parties can take care of the government all by themselves, the Italian president has almost only formal duties. But when the political system is in flux, he steps in and leads the way to solve the crisis, just as Mattarella appointed Draghi as PM.

The path ahead looks pretty gloomy for Italy. With a continuing pandemic and long-lasting structural issues to solve, instability is no doubt to be expected. Nobody of sound mind would consider giving that job to Berlusconi, a man whose politics have only ever safeguarded, not the Italian constitution, but his own advancement. We don’t need this man in the Quirinale.