A Florentine Sandwich Takes Over The Big Apple

From central Florence to Times Square, the Florentine sandwich is taking over the world. We went to try it in the Big Apple. 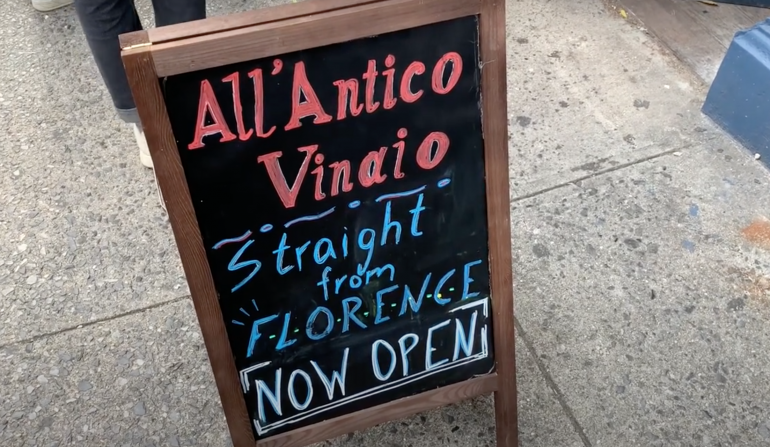 Sign outside of the NYC location. Photo: Heloise Wilson.

1989. The Berlin Wall fell. Brazil had its first election in nearly three decades. Ana Oxa sang Ti lascerò at Sanremo. And, in the center of Florence, the Mazzanti family opened a small wine bar with snacks. Unknown to them, they would leave a legacy that would travel far.

The family’s primary idea was to serve square sandwiches with fresh, seasonal fillings, to honor the traditional flatbread and focaccia’s big cousin — the schiacciata. It would be a versatile and filling pick-me-up that worked equally well as a late dinner or as a lunch on the hoof.

The Florentine sandwich quickly became incredibly popular and Mazzanti family soon opened outlets of All’Antico Vinaio (literally ‘Ancient Wine Merchant’) in Rome and Milan. But it wouldn’t stop there. As one of the epicenters of all international cuisines, it was only natural that New York would catch the scent. And that’s how All’Antico Vinaio found its way to the Big Apple.

The infamous Joe Bastianich meets the heir of Tommaso Mazzanti

Joe Bastianich — one of Italy’s most famous chefs — hosted the schiacciata sandwiches in his restaurant Osteria Otto, located in the bohemian West Village. Like everything that is new and tastes incredible, New Yorkers went crazy for these icons of Italian cuisine. The All’Antico Vinaio pop-up lasted for two months in 2019 — exactly 20 years after the first wine bar opened.

It was sold out for 30 days straight, with people queuing for over two hours to buy a humble sandwich.

Fast forward to 2021 and All’Antico Vinaio opened its first brick-and-mortar store in the heart of Time Square, on 46th street — otherwise known as Hell’s Kitchen or Restaurant Row. The place is tiny. The menu counts about 10 to 20 sandwiches, all with funny names and delightful pairings. Take The Odd Couple, for instance, a sandwich of porchetta, gorgonzola, and pistachio cream.

When in New York…

I decided to see what the fuss was all about. Trying the famous Florentine sandwich before seeing a Broadway show felt like the perfect opportunity to educate my taste buds.

All the ingredients were aligned in front of us and the sandwiches made before our eyes. I was too busy reading the menu to notice that Bastianich and Mazzanti were actually behind me having a casual business meeting. Other than my boyfriend and me, there were maybe one or two Americans — and they did not seem to recognize the MasterChef restaurateur and entrepreneur, nor the man whose family invented the sandwiches. It felt like a true Florence meets Manhattan moment.

Sadly, the vegetarian options are limited (perhaps in the future this will change) so I went for a simple Caprese sandwich — knowing it was a risk, as tomatoes in New York aren’t the best things in the world. I was assured, though, that the schiacciata was made fresh daily.

Where will All’Antico Vinaio go next? A location has already opened in sunny Los Angeles — proof once again that family traditions and tenacity can take over the world in unexpected ways.