People may go to Italy with the intention of seeing famous sites, but what really remains with them are the less tangible things that they experience. 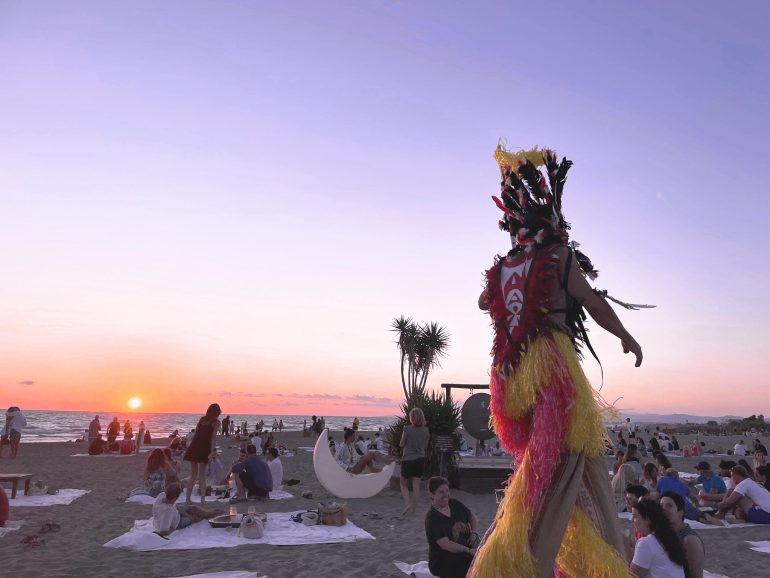 In a recent piece I used the term ‘social capital’ to refer to a certain aspect of Italian culture that I think visitors to Italy notice and appreciate, if perhaps only subconsciously. As I mentioned before, people may go to Italy, or any other place for that matter, with the intention of seeing some famous site or another or eating this or that dish, but what really remains with them are the less tangible things that they experience while they are busy attending to their more formal itinerary. It is this collection of small and subtle experiences that I refer to as social capital.

I think it is worth devoting a few words to discussing this idea more, and more importantly to giving a few examples of what I mean when I use it. Take for example a recent experience I had at a place outside of Rome, at a caffè, for lack of a better word, on the beach in a town called Fregene, in a location known as Villaggio dei Pescatori, or Fishermen’s Village, in an open sided shack that serves coffee, pastries, drinks and light meals in a casual and friendly setting, something that you could find on a beach in many countries throughout the world, a kind of place that hits that sweet spot of casual, sophisticated, friendly and economical, all immersed in a beautiful setting, namely a deeply green Tyrrhenian Sea on a deeply grey Roman day.

But apart from all of these tangible material things that make a great place what it is, there is a social capital component that I think is even more important. And here finally are some examples of what I mean by that. The first hit came when the waiter came up to me and asked me what he could bring me. Still boggled by the beauty of the setting, including a series of kitschy but clever scritti that were signposted along the boardwalk that led from the parking lot to the caffè, I absentmindedly asked for a caffè americano.

He might have been trying to upsell me, which is perfectly fine as far as I am concerned, but I don’t think so; I think he found it strange that at noon I was asking for just a coffee. After he left I pulled out my phone and realized it was indeed already time for lunch, so I hurried over to the bar and asked the woman behind it what kinds of things they served, explaining that it was my first time there.

Benvenuto. Noi offriamo i caffè, i dolci, i vini, gli aperitivi e anche il pranzo. Barista, who then enumerated the offerings for the day, a short list of pastas and salads.

I ended up ordering a squid salad with crunchy vegetables and a glass of white wine.

The waiter then returned to the bar, and I told him that I had changed my order and no longer needed the caffè americano and the vegan croissant.

So at this point everyone and everything was bene.

Now, none this is all that special or unusual so far, but here is where I started to notice that I was definitely no longer in the United States, or at least the part of the US that I am from, and not in a small town where people still treat each other like people and not just as consumers. Just a few minutes later, the waiter came by with my glass of wine and a bag of popcorn to have while I was waiting for my meal.

No problem. Grazie. Me.

Now, you might find that I am making a big deal out of nothing, but the fact that the waiter mentioned the cook by name tipped my entire experience over to one that was suddenly and nicely personal and specific to that particular moment and to that particular configuration of things in that particular place. And that made a big difference to me and affirmed to me that I was indeed in Italy and that the valorization and preservation of a personal and precise mode of social interaction was still a feature of Italian social capital. It made me feel seen as a person because, even though they did not call me by name or share their names, because really there was no reason to do so, they were intimate enough with me to share the name of the person upon whom the entire transaction depended, namely Gabrielle.

And this is not the first time I have encountered this particularly fine tuned form of social relation in an otherwise impersonal, public or institutional setting. I remember how in Italian class the teacher took a sweetly personal approach to teaching, always referring to all of her students by their first names, which in itself was not so special for a language class, which is typically small and intimate to begin with; but it was the way that she would gently shush any murmuring among us and instruct us kindly to listen to whomever was speaking at the moment:

Ascoltiamo Keegan, teacher, announcing that indeed it was Keegan, or whomever, who had the floor at that particular moment, and to whom all attention should be paid.

And it is this way everywhere in Italy: north, south, central, islands — it does not matter. It is like this even at the airport. I remember one time I was at either Fiumicino or Malpensa and decided I needed a drink, a not uncommon mode for me in that setting.

Still or sparkling? Barista, responding to my request for a white wine.

It’s only Spumante. Barista, bursting my bubble, with a smirk and a shake of her head.

More than likely an American in such a position, employed by such a bar, would have the sullen look of someone who was beaten down by their job. They wouldn’t dare refer to one of the bar’s products in such a derisive manner, afraid perhaps that someone would overhear them violating section 2.7.1 of the Employee Handbook and get fired. Or worse, they would pretend that they had it, and try to foist off one thing as another, like the time that a colleague and I received ‘espressos’ from a barista at a cafe at an airport in Philadelphia, the barista either not knowing or not caring that we would realize that she had merely poured a tiny amount of drip coffee into an espresso cup. Was the machine broken? Did she not know how to use it? Did they have just the espresso cups and not the espresso machine? If so, why not just say: We don’t have espresso? An Italian would never do that because they can reference a culture that exists before and outside of the culture of the workplace, at least in this particular ambit.

Now certainly there are exceptions. In Southern California or the Florida Keys, if they are still above sea level, there are most certainly beach bars staffed by dudes who are as genuinely low key, friendly and transparent as my Italian beach baristas. But these places and these people are getting rarer, succumbing to an all powerful and encompassing corporate culture. And all too often people in low paid service jobs are ethnic minorities who feel beaten down and marginalized in such an inequitable and alienating society already, but especially in their place of work. Or maybe the opposite is true, the waiter who practically sits in your lap and talks to you like you are now their best friend. It seems that Americans have a hard time modulating their public and the private personas.

But somehow Italian culture, traditional Italian culture, would never allow such a dispiriting force to have such a suffocating effect on daily identity and behavior. Or at least I hope so, or hope that it will remain so. I see glimpses of it now and then; at that same airport but at the car rental counter. And more seriously one certainly hears of all kinds of abuse in the agricultural and industrial sectors, but that is a different problem to be discussed at another time. But when it works in Italy, it works, and it is nice to be a part of it.